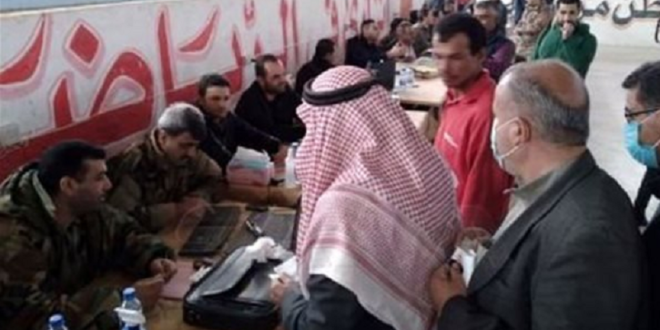 Deir Ezzor province: The Syrian Observatory for Human Rights have monitored new details about the “settlements and reconciliations” deals initiated by the security system, in the presence of branch commanders and high-level intelligence officers, in the city of Deir Ezzor and in the squares in the eastern countryside, a few days ag.

SOHR sources have also confirmed that “Hisbah” former members belonging to ISIS, the fighters of Hayat Tahrir al-Sham, the fighting factions, and the most prominent former members of “al-Hisbah” who made “reconciliations” in al- Mayadeen city, which is the “capital” of Iran-backed-militias west of the Euphrates, have made reconciliation deals.

On Thursday, SOHR activists reported that the director of the regime General Intelligence, Major General “Hossam Luqa” and leaders of the security services, arrived, to al-Mayadeen city which is under the control of Iran- backed militias and regime forces as a figurehead, to strike new reconciliations deals for wanted individuals and military deserters, in presence of members of parties and pro-regime and pro-Iran tribes dignitaries

On November 22, SOHR activists reported that only few civilians have participated in reconciliation deals, in Deir Ezzor province’s sports center, while the majority of whom strike reconciliations are of ISIS former fighters and deserters, who previously joined Iran-backed militias, have been obliged to strike settlements by their leaders, in front of media. In addition, pro-regime tribals from Raqqah province and east of Euphrates.
On November 14, Syrian Observatory for Human Rights, reported that the regimes almost complete failure to strike settlements under Russian blessings in Deir Ezzor city.

According to SOHR activists, regime security services threatened to dismiss employees off their jobs unless they show up to the sports center in al-Joura in Deir Ezzor city and strike settlements in public.

There are several areas in Deir Ezzor which are not under regime’s control and instead are controlled by SDF, while the regime-held areas only contain helpless people or pro-regime tribes that previously hailed and glorified the opposition factions during their control, and later pledged allegiance to ISIS after capturing wide areas of Deir Ezzor. Finally, the regime forces promulgated itself as topping the reconciliation scene.

It is decided that the reconciliations in Deir Ezzor city will move to the western countryside and then to al-BoKamal and al-Mayadeen cities and their countryside, all the way to the northern countryside