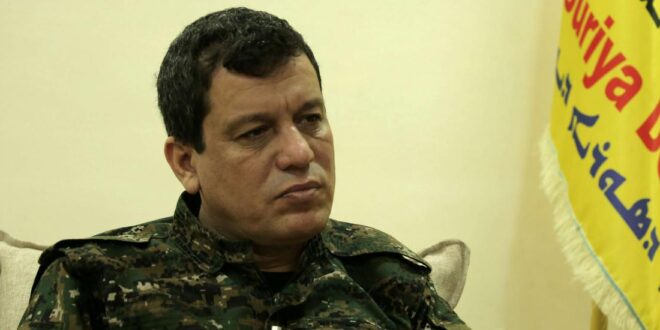 Only the United States can play a significant role in a democratic solution to the Kurdish question, Mazloum Kobane, the commander-in-chief of the Kurdish-led Syrian Democratic Forces (SDF) said.

Noting that the Kurdish question in Turkey impacts Syria, Kobane told the National Interest that the problems of all Kurds are “interconnected and tied to each other.’’

Turkey sees the SDF as an existential threat due to its links to the outlawed Kurdistan Workers’ Party (PKK) and has launched four major military offensives against the group, which controls enclaves in northeast Syria along the Turkish border.

Kobane maintained that some Kurdish cities were divided into two and there are tribal and community ties between the Kurds in said cities.

“The Turkish state has always been an enemy of the Kurds. So, when they are attacking Kurds in Turkey, they attack Kurds here, too,” the SDF commander said.

“When the conflict in Turkey between the Kurds who are fighting for their rights and the Turkish state escalates, the Turkish state becomes angry. They start attacking Kurds on this side of the border,” Kobane said referring to the invasion and occupation of Afrin in 2018 and Ras al-Ain in 2019.

It will be “very difficult” for Turkey to have good relationships with north and east Syria under such a political environment, according to the SDF commander.

Turkey should be pressed to resume the failed peace process to resolve the Kurdish issue, he said, adding, “if the international community pressures Turkey to announce a ceasefire, seek de-escalation, and start a peaceful process again, to go back to the negotiating table again and start a dialogue with the Kurds to resolve their problems in Turkey.”

“I think this is one of the options available for the resolution of Turkey’s Kurdish question,” he further said. “To be more specific, we think only the United States can resolve this problem since the United States works with Turkey, and with us.’’

Cemil Bayık, a founding member and top leader of the PKK, holds a similar view concerning Washington’s role to resolve the Kurdish issue.

“We have often brought up the influence of the U.S. over the Turkish state and the role that it could play in a democratic solution to the Kurdish question,” Bayık said in a May interview with ANF News.

“If the U.S. plays a role to prevent the massacre of the Kurds, why would we reject that?” he said.