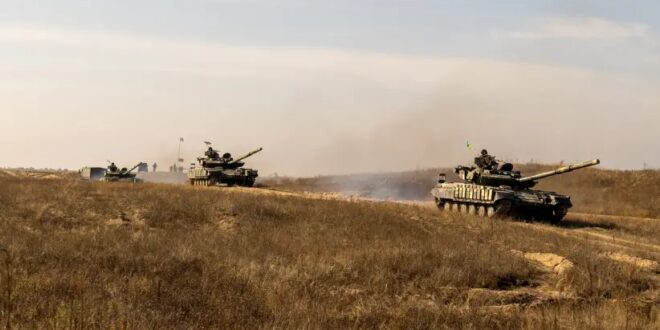 Russia likes to toy with Europe and show that it can defend its former near abroad. Why anyone from Moscow to Washington would want an actual conflict appears far-fetched.

Russian President Vladimir Putin warned this week that Russia would respond if NATO-member countries crossed a “redline.” Meanwhile, US Secretary of State Antony Blinken warned Russia against aggression in Ukraine, claiming any aggression would trigger “serious consequences.” The US and UK have both warned Moscow. Blinken also briefed the 29 NATO members on US intelligence regarding tensions in Ukraine.

Western countries are convinced that there is a large build-up of Russian troops on the border with Ukraine. According to BBC reports, Russia is concerned that Ukraine might join NATO and it is annoyed about US naval and air activity in the Black Sea, as well as Ukraine buying Turkish drones.

Russia’s TASS media had an article on Wednesday that noted NATO Secretary-General Jens Stoltenberg’s recent comments about the organization. “We must understand the difference between a NATO ally, for example Latvia, Poland and Romania, and a close and highly valued partner [such as] Ukraine. For the latter we provide support, training capacity and equipment; for allies, we have security guarantees under Article Five,” he told reporters in Latvia when asked what kind of assistance NATO could provide to Kyiv in case of Russia’s alleged military aggression.

Russian media noted this was the sixth time in the last five days that NATO’s leader had made comments about “Russia’s alleged military build-up on the border with Ukraine.

“Stoltenberg called for transparency and de-escalation, warning that in case of military aggression, NATO would make Moscow pay a high price. However, he declined to say if the alliance was considering taking any military steps to support Kyiv.” Russia, for its part, claims that Ukraine might be the aggressive one, stoking tensions.

What this means is that there is a kind of self-fulfilling prophecy. While each side accuses the other of raising new tensions – even coup plots against Ukraine’s leader – the diplomatic tough talk could actually result in clashes on the ground.

IT SHOULD be recalled that in 2013-2014, there was a crisis in Ukraine that resulted in the pro-Russian president Viktor Yanukovych fleeing the capital after massive protests and clashes. After he fled in February 2014, Ukraine faced a chaotic situation.

Pro-Russian separatists took over areas in eastern Ukraine and, according to widespread reports, they had covert Russian backing. Russia annexed the Crimea in March 2014, taking from Ukraine another key territory. Fears in Kyiv were that worse was to come.

However, the pro-Russian advance was halted and soon the separatists and their backers in Moscow were pushed out of some areas, including Sloviansk – though Donetsk airport was destroyed.

Eventually, the battle lines hardened, and by 2015 there was a stalemate in eastern Ukraine. Tensions continued. Ukraine views the battles against separatist areas and the frontline as an “anti-terrorist” operation.

Two breakaway separatist republics of Donetsk and Luhansk have emerged, backed by Russia. This is similar to situations in the Caucasus where small quasi-states exist, including South Ossestia and Abkhazia.

The tensions continued and there are frequent clashes on the frontline. However, tanks and large forces are not supposed to be concentrated near the front. Russian troop concentrations are thought to be hundreds of kilometers away, but considering the vast distances involved, this is seen as relatively close to the frontline.

It is thought that some 100,000 Russian troops, including tanks, are amassed within a day or two’s march from the border.

ONE IMAGE making the rounds comes from Maxar technologies and was shared with media. It shows armored units near Yelnya, a town near Belarus. “The units, which began moving in late September from other areas of Russia where they are normally based, include the elite 1st Guards Tank Army.”

To move from Yelnya to Ukraine would take time and the highways here do not go south. The units would probably have to traverse Belarus to land on Ukraine’s approaches to Kyiv. Of more concern, say reports, are concentrations at Kursk and Bryansk, which would put the armored units within a day or two of a strike at Kharkiv.

Here they could provide support for the separatist republics by landing a blow on Ukraine’s flank. But deploying large forces like this takes time – not just moving the tanks by rail or truck, but putting them into the field to cross the frontier.

All of this seems far fetched. Russia likes to move military units around and call out major drills and exercises to show off its power. Putin has revolutionized Russia’s army over the last decades, especially certain units. This includes providing the Russian Airborne Force with new materials that are supposed to reach 75% of the units by the end of this year.

Ukraine is also modernizing its forces. The former US administration approved and delivered the sale of 210 Javelin anti-tank missiles and 37 launchers. Ukraine has begun drilling with its new equipment and Reuters said last week it launched a special operation near the border with Belarus.

Meanwhile, Belarus has indicated it would back Russia in a conflict with Ukraine. It was recently accused by Europe of using a “hybrid war” against Europe by pushing migrants toward the Polish border.

Radio Free Europe reported that “Belarus’s authoritarian leader, Alexander Lukashenko, has said that his country would be willing to host Russian nuclear weapons if NATO moved similar US equipment from Germany to Eastern Europe.”

GIVEN ALL these tensions it’s possible that an unintended clash could lead to a larger conflict. The problem for Ukraine is that despite modernizing its forces, it still possesses only a handful of new drones and anti-tank missiles. This is not a serious force to stop a large Russian army.

Winter is also setting in. The areas that are now contested have seen massive battles in the past. The battle of Kursk, for instance, covered a huge area of what is now the Russia-Ukraine border and involved thousands of tanks and millions of soldiers. Today the conflict that might result would not be like Kursk.

The real conflict appears multi-layered. Belarus wants to appear relevant to Moscow and keeps stirring up problems with Europe. Putin wants NATO to stay out of Ukraine; Ukraine wants to draw NATO in. The US wants to stand by its partners and allies after leaving Afghanistan.

Everyone is playing their role. However, no one wants a real conflict. The Belarus regime, in risking a crisis, could find itself imperiled. Ukraine doesn’t want a setback on the frontline, as it prefers to continue its efforts at military modernization. Russia likes to toy with Europe and show that it can defend its former possessions.

That anyone from Moscow to Washington would want an actual conflict appears far-fetched. That the West would back such a conflict in the winter seems even more far-fetched. It’s entirely possible that the rumors of war are designed, by both sides, to distract and to deter. If that’s the case, it could just be bluster, but some can benefit from bluster.

The story of Turkey’s drones, for instance, is a way for Ankara to benefit from appearing to supply key military equipment to Ukraine, even if the drones are few in number and not actually doing much. Cool heads should prevail – but if they don’t, then a small incident somewhere on the border could lead to a larger crisis.