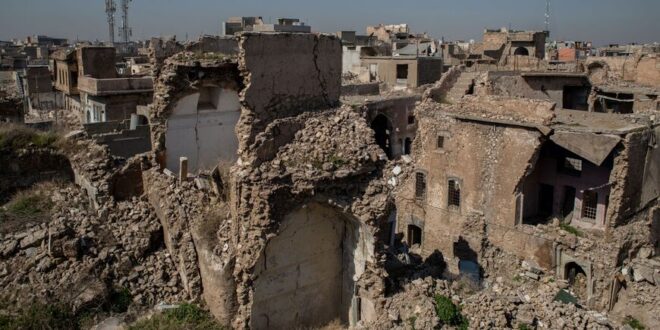 Civilians in the Iraqi city of Mosul complain about the power of the militias who freed them from the clutches of the Islamic terror group IS, but turned to occupier later on.

Cars form long queues in front of petrol stations in Iraq’s second largest city, Mosul — a city in an oil-producing country that suffers from petrol shortages. This is one of the consequences of the presence of Shiite militias in this Sunni-majority city, which they liberated from the Islamic State (IS) in 2017.

“It feels like a new occupation,” says engineer Muaamar Sameer Saadoon, who imports and installs electrical appliances in Mosul. His company only just survived the IS occupation, and the liberation hasn’t brought much relief. “Daesh demanded a percentage on the earnings of companies like mine,” he says, using the local abbreviation for IS. “With Daesh, that was ten percent. Now, we have to pay 14 to 15 percent to the militias.”

For IS, extortion was an important source of income, and Al-Qaeda engaged in it before them, as did the Iraqi security forces. The difference now, says Saadoon, is that before IS took over in 2014, the fear of being caught restrained civil servants. But when IS openly asked for money — in their vocabulary, “taxes” — for a host of things, that fear soon evaporated. “It got to the stage where IS teamed up with the civil servants, and took part of the extortion money.”

He has no choice but to pay, as otherwise he will be unable to get his goods past the checkpoints, which the militias also run, controlling access to the city. Which also explains how tankers full of petrol that Mosul receives from Iraq’s refineries can leave the city again, to be sold in the Kurdistan Region or even in Iran. And as the militias get rich, Mosul’s civilians queue.

Members of Brigade 30 — all fighters from the Shabak Shiite minority — have a monopoly in scrap metal, which is an important source of income after any war in Iraq. And, given the scale of the recent destruction here, especially in Mosul. As a result, scrap metal is piled high along the main road from Kurdistan to Mosul, which crosses Shabak territory. On top of the car wrecks and twisted metal, Shiite flags wave triumphally.

The Shabak are an ethnic group numbering over a quarter of a million members who have long lived in relative peace on the Nineveh Plain and in Mosul. During the battle against IS, its fighters became part of the Popular Mobilization Forces, or PMF, as did other militias. After the liberation, they stayed on to help the police and army secure the Sunni areas. Which is how, from a minority group, they managed to turn themselves into a powerful player.

Since Saadoon lost his company’s premises during the war against IS, he is looking for a new location. “Around the city, the local government dedicated special areas to industry. But the militias have cut these up and divided them amongst their own people and sold them for housing.”

To protest is not possible, says Saadoon. One would risk getting kidnapped. Or, like the successful Abu Leila restaurant in West Mosul which refused to pay the corrupt civil servants, you could become the victim of a bomb attack. The badly damaged restaurant has not reopened since.

Another source of income for the militias are the funds that arrive from Baghdad for rebuilding, and as a result, large parts of Mosul are still in ruins. The rebuilding that does take place is mainly from private loans secured by citizens and businessmen, and from aid from outside. “We should thank the international NGOs for the aid,” Saadoon says. But everyone knows even they have to pay a percentage of their aid money to the militias.

The unpopularity of the militias in Mosul is partly rooted in the city’s poor relationship with Iran. The neighboring country, which trains and pays the Iraqi militias, was Iraq’s main enemy for many years. And, with its military academies, Mosul has long been Iraq’s military capital; the army that fought the Iranians was trained here.

So silent anger rages in the Sunni city against the omnipresent green and red banners with images of the son-in-law and the grandson of the Prophet Mohammed—the men whom Shiites consider the Prophet’s only genuine successors. And against the posters of the Iranian general Qasem Soleimani and the Iraqi PMF leader Abu Mahdi al-Muhandis, who worked closely together and were killed by an American drone in 2020. For many Sunnis, they symbolize Iranian power in Iraq; the positive role they played in the battle against IS is long forgotten.

“Provocation, pure and simple,” the young politician Abdullah al-Nujaifi calls it. “Now we also have a Khomeini School! As a result, people are feeling more and more repressed. It’s as if they are no longer living in their own country.”

To Nujaifi, who was a candidate on a Sunni list in the Iraqi parliament elections this October but did not win a seat, it’s all about identity. The Sunni identity of his city has been made controversial by IS’ radical form of Sunnism. The Shiite militias exploit this notion, he says. “People are scared to talk about that. I see fear whenever I try to address it.”

Nujaifi’s father, Atheel, was the governor of Mosul before IS arrived, and his uncle Osama was chairman of the Iraqi parliament. The young Nujaifi worries about the growing power of the militias. They even dominate the Directorate of Health now, he says. As a result, none of the public hospitals in the city is being rebuilt, and the city’s 1.5 million inhabitants have to make do with a couple of emergency portacabins.

The Shabak Brigade 30 shares power with three other pro-Iranian militias: Kata’ib al-Imam Ali, Hezbollah, and Asaid al-Haq. Since 2018, they have ignored every order from Baghdad to return to base, and the capital’s decision to close the militias’ offices has had no effect either. The Christian Brigade 50, or Kata’ib Babiliyun, is also active here. Its leader, Rayan al-Khaldani, has been added to the American sanction lists, as has Abu Jaafar al-Shabaki of the Shabak brigade, mainly for the way their militias intimidate civilians with extortion, illegal arrests and kidnapping.

Businessman Muaamar Saadoon points out that, given the pressure, militia leaders are looking for ways to secure their economic and military power. That is why they ran for parliament in October, and even won seats. “They have to prevent the money they have been able to steal from being stolen from them in turn,” he says.

The fact that Iraq now has members of parliament against whom international sanctions are in place is an attack on the Iraqi state, Nujaifi says. “People who have lost their trust in the government see no other solution but to go directly to the militias to get their problems solved. That is where we have ended up.”