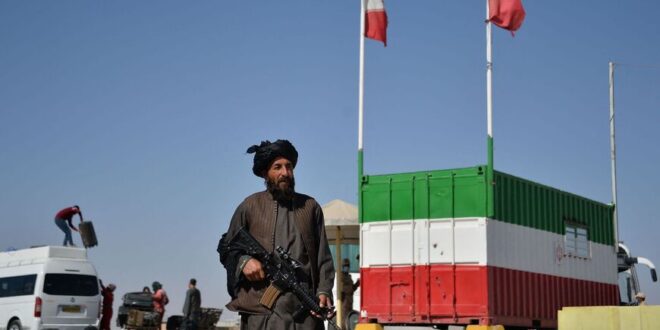 “The clashes ended and Iran is discussing the dispute over the border with the Taliban,” Reuters quoted the semi-official Tasnim news agency as saying. The Iranian news outlet also denied reports that the Taliban fighters had captured an Iranian border camp near Afghanistan’s Nimroz province.

Iran’s Mehr news agency described the clashes as between Iranian forces and “unknown armed men” who fired on Iranian farmers and punctured tires on their tractors. Citing a “source familiar with the matter,” Mehr also said reports that the Taliban seized control of multiple Iranian border checkpoints were false.

Iranian Foreign Ministry spokesperson Saeed Khatibzadeh said in a statement, “This evening, a dispute between people who reside on the border caused gunfire in the Sistan border area, which was handled and ended with the coordination of the border guards on both sides.”

Iran shares a 900-kilometer (560-mile) border with Afghanistan and hosts some 3.6 million Afghan refugees. Since the Taliban’s takeover in August, hundreds of thousands of Afghan civilians have escaped into neighboring Iran using informal border crossings.

The Shiite Islamic Republic has pledged to work with Afghanistan’s new Sunni extremist leaders despite their historically rocky relationship. Iran’s hard-line President Ebrahim Raisi has described the United States’ “military defeat” in Afghanistan as an opportunity for peace.

Post Views: 71
Previous How Mosul’s liberators became occupiers
Next HTS subsidizes bread in Idlib as part of attempt to govern