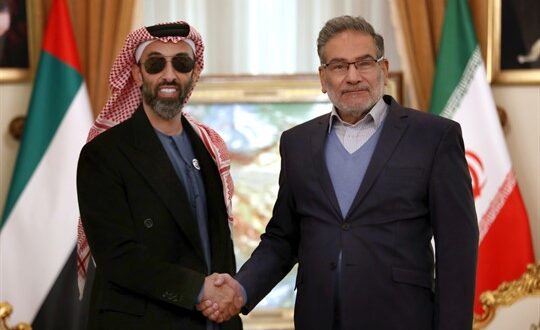 Diplomacy Is the Middle East’s Best Bet, but It’s Still a Long Shot

High-level diplomacy has intensified among competing Middle East regional powers, a flurry of bilateral talks that increasingly suggests what a “Plan B” would look like if, as seems likely, the U.S. and Iran fail to revive the deal that briefly constrained Tehran’s nuclear program.

The pace of contacts and meetings between the region’s prime movers has stepped up a notch in recent weeks, in a tangible sign that governments in the Middle East are responding to what they see as a clear downsizing of Washington’s role in the region.

The most visible example of this adjustment was a meeting that took place in Tehran this week between the top security officials of Iran and the United Arab Emirates. Sheikh Tahnoon bin Zayed Al Nahyan, the UAE’s national security adviser, met with Ali Shamkhani, the head of Iran’s Supreme National Security Council, as well as with Iranian President Ebrahim Raisi.

In other examples of regional diplomacy, Saudi Crown Prince Mohammad bin Salman on Monday began a tour of Arab states in the Persian Gulf, with plans to visit Oman, the UAE, Bahrain, Qatar and Kuwait, ahead of the Gulf Cooperation Council’s first summit since the end of the Saudi-Qatari rift. Several regional governments have upgraded diplomatic contacts with Bashar al-Assad’s government in Syria, and others long frustrated with Turkey’s destabilizing moves in the region have nonetheless thawed ties with Ankara.

I have expressed pessimism before about how much can be expected from intra-regional dialogue in the Middle East, given the heavily divergent interests dividing the different camps. Rich oil producers will never have the same economic priorities as their poorer, aid-dependent neighbors. Hereditary monarchs don’t, and likely will never, understand why their nonroyal but for the most part still-authoritarian peers feel the need to placate powerful constituencies—and both groups fear the precedent set by republics, revolutionaries and reformers across the region. Theocrats see a threat from all alternative forms of government, regardless of the system. And enduring geopolitical rivalries and webs of alliances continue to influence armed conflicts from Yemen to the Levant to Libya.

At the same time, Washington has clearly renounced its role as the region’s chief referee. The power of Pax Americana has sometimes been exaggerated, especially by those nostalgic for an imagined age when Washington could supposedly call the shots in Middle Eastern conflict zones. However, the U.S. did serve as a clarifying force in the region, playing a more dominant role than other outside powers by projecting influence through a massive military footprint as well as its deep financial ties to the region’s richest countries, particularly in the Persian Gulf. The United States was the default convener of diplomatic initiatives in the broader Middle East, and much of the region’s politics unfolded either in tandem with Washington’s priorities or in opposition to them.

None of this is to say that the U.S. unilaterally drove Middle Eastern politics or even defined the region’s interests. But by dint of its ubiquitous presence, for good and often for ill, Washington served as a unifying frame of reference, including for powers opposed to the United States—and as a shared platform when regional players desired one.

Gone is even that limited utility, which means that regional governments now have to navigate a complex two-level game. Internationally, they are cultivating and balancing relationships with the United States, China and Russia, all of which impact regional fortunes through markets, investment and military power. Regionally, Middle East governments must also reassess their own interests without the at times distorting prism of the U.S. security umbrella/bear hug, which in the past provided ample room for reckless escalation and moral hazard.

To listen to the most alarmist governments in the region, which also happen to be among the most destabilizing, just about everything is an existential threat. Israel raises red flags about everything from Iran’s nuclear program and Hezbollah’s rockets to Palestinian human rights groups. Saudi Arabia and the United Arab Emirates have plausibly claimed strategic threats from Iran and its proxies, especially the Houthis, and less plausibly from Qatar and the regional activities of the Muslim Brotherhood. Turkey has at various points over the past decade identified core national interests everywhere from Cairo and Syria to Qatar and Iraq, while nursing grudges against the United States, Russia, Saudi Arabia and others in the process. Tehran has simultaneously escalated conflicts around the region and invested in a growing cohort of proxy forces that successfully compete with state power, all the while accusing its adversaries of taking part in a sprawling U.S.-Israeli plot against Iran.

There are legitimate threats out there, not least among them the Islamic State, which continues to make a comeback in Iraq and will likely continue to be a problem for regional governments and the international community at large if it gains another foothold in the Middle East. There are also genuinely divergent interests that are hard to reconcile. Turkey, for instance, views the Kurdistan Workers Party, or PKK, as a terrorist separatist threat, while the United States and others view the same group as a vital partner in northeast Syria, one that is helping in the campaign against ISIS while providing leverage against Assad. Qatar is likely to continue to see the Muslim Brotherhood as an ideologically suitable ally and a practical tool to project power around the region, while the monarchies in the UAE and Saudi Arabia, for the time being, view the Brotherhood as posing a challenge to their political legitimacy and their regional interests.

The current round of intraregional diplomacy is the beginning of a course correction after the past two decades, when U.S. interventionism in the region exacerbated regional conflicts and at the same time enabled—in some cases even forced—regional powers to abdicate responsibility for providing stability, security and governance at home and in their neighborhood. During 20 years of peak U.S. military involvement in the Middle East, regional leaders could freely engage in threat escalation and bombast. Now they have the chance, and the responsibility, to identify their top priorities and find ways to deescalate, or reach compromises, on less urgent but significant matters.

Among other things, Washington’s reduced role in the region now means that the Gulf monarchies will have to reach some kind of modus vivendi with Iran, which has been the most flagrant of many regional actors using force and proxy violence in order to achieve their goals. Iran, Turkey, the UAE, Qatar, Saudi Arabia and Israel have all experimented with the use of military force to project power and intervene in regional conflicts. To some extent, they have all relied on the United States to ensure that those conflicts didn’t spiral out of control. But again, it’s long been clear that Washington no longer can or wants to serve as a regional guard rail.

The current high-level contacts between Middle East governments will allow them to explore where their priorities overlap, so they can search for substantive compromises on some core threats and interests. When are they willing to restrain militia proxies? Will they open channels for deescalating conflict among warring factions and reduce the use of rockets, drones and assassinations across borders? Can Tehran and Riyadh find a mix of deterrence and inducements that makes both sides more interested in political and economic collaboration than in military confrontation? The prospects remain slim with so many countries in the region so deeply invested in armed approaches. But with the region no longer able to count on Washington as a committed or credible outside arbiter, diplomacy represents the only hope.

Tunisia’s most powerful union, the Tunisian General Labor Union, or UGTT, called on Saturday for early elections, in a belated but important sign of disenchantment with President Kais Saied’s power grab. Saied suspended the constitution in July, ending Tunisia’s decade-long experiment with democracy. Major backers of Tunisia’s post-2010 democratic transition initially refrained from condemning the president’s coup, but the UGTT finally spoke out against Saied’s concentration of power in his own hands, saying it was concerned because he has not announced a timeline for the restoration of democracy. “We supported July 25 because it was an opportunity to save the country and implement reforms,” said UGTT Secretary-General Noureddine Taboubi. “But we have become afraid for Tunisians’ democratic gains because of the excessive reluctance to announce a roadmap.”

Two unrelated stories about Syria that delve into the meta-narratives of the conflict there are on my must-read list this week. Asser Khattab, a veteran Syrian journalist who reported for The Washington Post and The Financial Times, among other publications, writes in a ruminative first-person essay in NewLines Magazine about the personal toll of working as a lower-profile local hire for international outlets. Khattab writes with honesty and insight about the psychological impact of covering the war in his country for so many years, and how much of the harm surfaced only once he had reached the relative safety of asylum in France. He also discusses the de facto glass ceiling that restricts local reporters hailing from conflict zones from promotion to staff reporter jobs.

Meanwhile, in a different type of story from the same conflict, The New York Times published an investigation by Ben Hubbard and Hwaida Sa’ad into the captagon trade that has flourished in Syria’s conflict economy. According to the report, the Syrian Army’s Fourth Division, run by President Bashar al-Assad’s younger brother Maher, controls the Syrian market for the methamphetamine-like drug, which has unsurprisingly become a major revenue stream in an economy shattered by war and further stifled by Western sanctions.

Post Views: 148
Previous NATO’s Nuclear Deterrent Gets a Reprieve—for Now
Next A Leadership Shakeup in Mozambique Signals a New Approach to Security