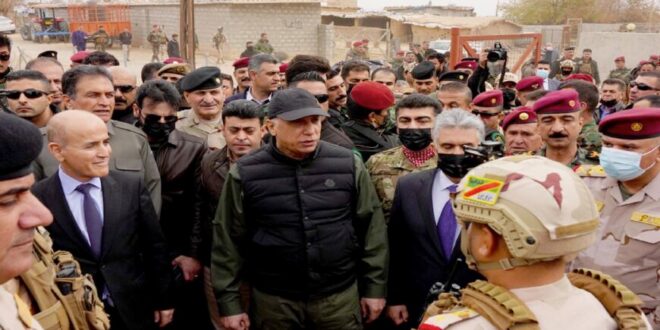 Iraqi Prime Minister Mustafa al-Kadhimi visited a northern village today that was recently attacked by the Islamic State (IS).

Kadhimi went to the village of Liheban in the Makhmour district to meet local residents, his office tweeted.

The Islamic State (IS) attacked peshmerga forces and civilians on Dec. 3 in Makhmour, killing several. Makhmour, located about an hour south of Erbil, is claimed by both the federal government and the Kurdistan Regional Government (KRG). Both Iraqi federal security forces and the KRG’s peshmerga forces have a presence in the area, and the population consists of Arab and Kurdish communities.

Iraqi forces, backed by a US-led coalition, defeated IS in 2017. But IS continues to carry out attacks, particularly in disputed territories like Makhmour. IS also attacked the peshmerga in northeast Diyala province three days in a row from Nov. 27-29.

The KRG has long called for greater coordination with federal forces to combat IS in the disputed territories.

“The Kurdistan Regional Government has repeatedly warned the federal government of security gaps in disputed territories, which is a hub of resurgent terrorism threatening locals,” the KRG said in a statement on Nov. 28 after the Diyala attacks. “The KRG reiterates the importance of reactivating joint coordination centers between peshmerga and Iraqi forces.”

The KRG was in full control of Makhmour until 2017 when Iraqi forces retook the area following Kurdistan’s independence referendum.

Kadhimi appeared open to more cooperation with Kurdistan Region officials during his visit. He also met with KRG Prime Minister Masrour Barzani and visited a peshmerga base. Kadhimi discussed the fight against terrorism with Barzani and peshmerga commanders, according to his office.