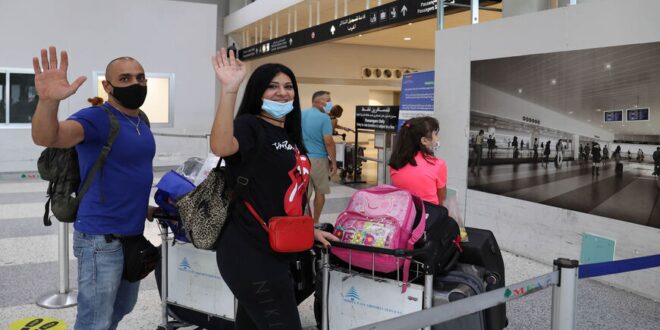 Lebanon is witnessing one of the biggest waves of emigration in its history as the country faces its worst socio-economic conditions amid a worsening political crisis; Turkey, Armenia and Georgia have become new destinations.

Western European countries, the United States, Australia and Gulf states have been Lebanese’s top migration destinations in the past. Following the Lebanese civil war in 1975 and up until 1991, Lebanon witnessed a huge wave of emigration. Over the years, emigration would increase depending on the security, political and economic conditions in Lebanon. The destinations seem to be changing today.

In the last couple of years, Lebanese youth have started exploring new countries, such as Turkey, Georgia, Armenia, and most recently Serbia.

“Following the Oct. 17 revolution in 2019, more people started leaving Lebanon, reaching 17,720 emigrants in 2020. Over the last 10 months, we recorded an increase of about 65,000 people,” Mohammed Sham al-Din, researcher at the Beirut-based Information International, told Al-Monitor.

Based on official data, Shams al-Din expected this number to double in 2022, especially since there has been a 150% increase in passport renewal requests as the Lebanese wish to flee Lebanon before more crises hit.

The great demand for passports prompted the Lebanese General Security to issue regulatory decisions about a month ago regarding the priority of issuing passports, postponing nonurgent renewal requests.

In order to obtain a new passport or renew an existing one, citizens need to present proof of a valid entry visa or residency in the foreign country they wish to travel to, as well as a plane ticket and hotel reservations.

“The General Security is trying to limit the number of passport renewals so that each public security center in Lebanon issues a maximum of 40 passports [a day] because there are 150,000 pending requests and it takes a long time and requires a big budget to print new passports. This crisis will continue until March 2022,” Sham al-Din noted, referring to the scheduled date for the parliamentary elections.

The recent emigration of Lebanese youth, which ranks as the third-largest emigration wave in Lebanon’s history according to the Crisis Observatory at the American University of Beirut, is no longer only targeting France, Germany, Sweden and other countries the Lebanese once migrated to.

“In 2021, at least 5,000 Lebanese emigrated to Turkey, 70% of whom are between 20 and 40 years old. A lot of Lebanese also chose Georgia and Armenia as their emigration destinations. Information International has no official figures yet since these countries do not provide statistics for young people, in particular, the majority of whom resort to these countries as a gateway to Western Europe,” Shams al-Din explained.

Lyne Jida, the official in charge of the Lebanese community dossier at Tulyp, a social association concerned with the affairs of the Lebanese in Turkey, told Al-Monitor, “Most Lebanese choose Turkey as their country of residence to escape living in Lebanon since they do not need entry visas and they can obtain an annual residency known as the tourist residency for $130 to $160. In addition, tickets to Turkey are cheaper than other destinations.”

Jida said, “There are currently about 10,000 Lebanese in Turkey. We had 5,500 Lebanese in 2020, 500 of whom have since left Turkey; some returned to Lebanon while others left for other countries. The majority of Lebanese in Turkey reside in Istanbul, Antalya, Mersin, Ankara, Adana, Izmir and Isparta. Over the last couple of months, more families have settled here.”

She noted, “Most Lebanese here are Muslims — Sunnis in particular. They come mainly from northern Lebanon, Beirut and other regions. Youth between 18 to 23 years old are students who come to study at private universities since foreigners do not have the right to study at public universities.”

Jida pointed out, “The Lebanese find jobs in private companies, restaurants and recreational enterprises, as they hold a tourist residency, but that is illegal. Some major companies are forced to get them work permits. Others prefer to open small businesses, such as bakeries, which have a high turnout. Those with larger capital mainly invest in the tourism sector, such as restaurants, hotels, and in import and export.”

In mid-2020, particularly after the Beirut port explosion on Aug. 4, 2020, and following the successive economic crises, unemployment, poverty and hunger, the devaluation of the Lebanese pound and the collapse of the political situation, a number of Lebanese and Lebanese Armenians left for Armenia.

Annie Aznavourian, a Lebanese Armenian who arrived in the capital, Yerevan, in early 2021, after leaving her job as a bank manager in Beirut, told Al-Monitor, “I arrived here about a year ago with my two sons after I lost hope in Lebanon. After 18 years of work, my end-of-service compensation no longer had any value since the Lebanese currency dramatically depreciated.”

Aznavourian is currently trying to start her own small business in Armenia. “Many Lebanese came here this year; there are at least 7,000 Lebanese residing in Armenia. Most come here to open small or large businesses. The only job opportunities are in customer service centers, especially night shifts, for $350 [a month],” she said.

She noted, “With $10,000, one can start a small business, and the state provides help for obtaining licenses from official departments, all of which is done electronically.”

Aznavourian continued, “Housing is expensive given the high demand, but the cost of food, services and medicine is very low. Many Lebanese investors, businessmen and factory owners opt for buying land, especially nut orchards alongside livestock and poultry farms.

Speaking about the residency permit, she said, “It is very easy to obtain residency in Armenia. Before the coronavirus pandemic, the Lebanese entered without a visa; today they can easily obtain it electronically. Those who have an Armenian mother obtain citizenship immediately; a man whose wife is Armenian pays $100 for the annual residency, while non-Armenian Lebanese pay $200.”

She added, “Many Lebanese students are applying to universities in Armenia, specifically the American University, as the fees are much lower than in Lebanon. For example, the same major costs between 8,000 to $12,000 in Lebanon, while it costs no more than $3,000 here and university housing is included.”

Aznavourian pointed out that “95% of the Lebanese in Armenia are Christians, and of course the largest proportion of them are Lebanese Armenians.”

“The Lebanese community in Georgia is the third-largest community after the Iraqi and Egyptian ones. The Lebanese presence began four years ago with the influx of students who came to study medicine and engineering since tuition fees are lower than in Lebanon. Studying medicine currently costs $6,000 annually here [Georgia]; much cheaper than in Lebanon,” Hassan Khadra, an official from the Arab Community of Georgia, told Al-Monitor.

“Before 2021, there were about 700 Lebanese here, most of whom are investors in the tourism sector in particular, and the rest are students. Most Lebanese in Georgia are Christians who would rather live here instead of in Turkey to have religious freedom,” he added.

“Today, there are over 1,500 Lebanese in Georgia, some of whom have recently arrived from Malaysia and Turkey, preferring to live and invest here, as it is cheaper in terms of living and more stable,” Khadra noted. “The Lebanese mainly reside in the capital, Tbilisi, especially students, and Batumi, which is preferred by investors since it is a tourist city.”

He said, “The capital required to start a small business is $10,000. Five years ago, one could purchase an apartment with this amount, but after Arabs rushed to Georgia prices rose.”

Khadra concluded, “Many Lebanese youth open barbershops, with a budget of around $15,000. Those with more capital resort to investing in Lebanese restaurants, which are very popular among tourists.”

Post Views: 161
Previous Turkey’s good relations with Qatar may not be enough for Erdogan
Next Turkey arrests dozens of foreign Islamic State suspects