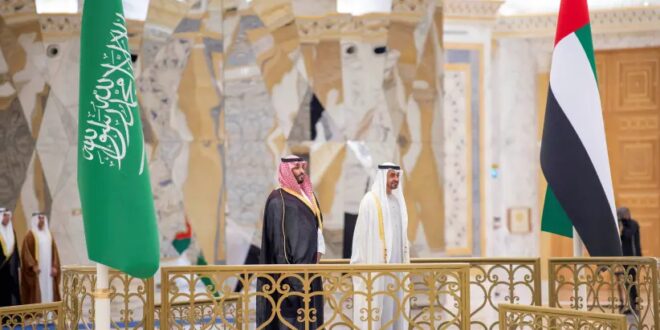 The UAE and Saudi Arabia warned against the “terrorist Hezbollah” in a joint statement on Tuesday.

The United Arab Emirates and Saudi Arabia stressed the need to ensure that Lebanon “will not be a starting point for any terrorist acts,” pointing specifically to Hezbollah, and expressed support for a Palestinian state with its capital in east Jerusalem, in a joint statement at the end of a visit by Saudi Crown Prince Mohammed bin Salman on Wednesday.

The two countries stated that they reviewed developments and issues of concern for them on the regional and international arenas, stressing the “coordination of their positions to serve their interests and support and enhance security and stability in the region and the world,” according to the official Saudi Press Agency.

“On the Lebanese issue, the two sides stressed the need to carry out comprehensive political and economic reforms to ensure that Lebanon can overcome its crises, limit arms to the legitimate state institutions, and that Lebanon will not be a starting point for any terrorist acts and a hub for organizations and groups that target the security and stability of the region such as the terrorist Hezbollah or to be a source of drug scourge that threatens the safety of societies in the region and the world,” read part of the joint statement.

The UAE and Saudi Arabia affirmed their “full support” for the rights of the Palestinian people “foremost of which is their right to establish an independent and sovereign Palestinian state on the borders of June 4, 1967, with East Al-Quds (Jerusalem) as its capital…in a way that achieves the aspirations of the fraternally Palestinian people.”
The statement did not make any references to Israel.

The two states also stressed the importance of dealing “seriously and effectively” with Iran’s nuclear and missile file in a way that contributes to achieving regional and international security and stability and sparing the region from “all destabilizing activities and interventions.”

The statement also pointed to deep coordination between the UAE and Saudi Arabia in a number of fields, including energy, technology, health, tourism, food security and human development, among others.

A diplomatic crisis exploded last month after Saudi Arabia expressed outrage against comments made by Lebanese Information Minister George Kordahi supporting the Iran-backed Houthi rebels in Yemen and criticising the military intervention led by Saudi Arabia, calling the war in the country “futile.”

Saudi Arabia and the UAE, along with other Gulf states, withdrew their diplomatic envoys and expelled Lebanese envoys in response to the comments. Saudi Arabia also designated the financial charity body Al-Qard Al-Hasan Association, which is linked to Hezbollah, as a terrorist entity, saying it “works on managing funds for the terrorist organization (Hezbollah) and its financing.”

While Kordahi is a Maronite Christian, he received strong support from the Hezbollah movement who expressed strong opposition against calls for the minister to resign. The movement claimed Saudi Arabia was “waging war” on Lebanon with its diplomatic measures issued in response to Kordahi’s statements.

Despite the support from Hezbollah, Kordahi resigned last week, saying that he was doing so “for the mere fact that Lebanon is more important than my position. I do not accept to be used as a reason to harm the Lebanese residing in Gulf countries because the interests of my country and my loved ones are way above my personal ones,” according to Lebanon’s National News Agency.

Kordahi claimed that France had requested that he resign before a planned visit by French President Emanuel Macron to Saudi Arabia.