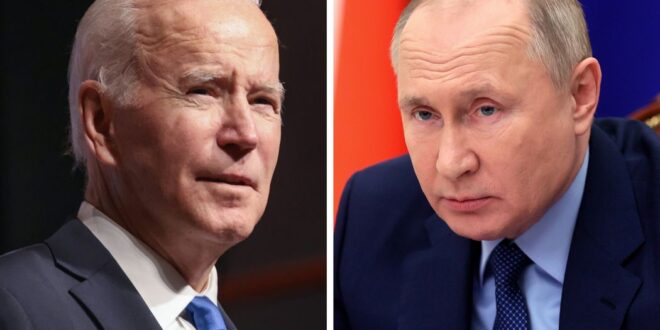 President Biden warned Russian President Vladimir Putin that the U.S. and its allies would meet a military invasion of Ukraine with strong economic penalties, moves to bolster Ukrainian defenses and fortify support for Eastern European nations.

For two hours Tuesday, the two leaders held a secure video call to address what the U.S. has described as large and unusual troop movements near Russia’s border with Ukraine in recent weeks.

Mr. Sullivan described the conversation as direct and straightforward. There was “a lot of give and take. No finger wagging. But the president was crystal clear about where the United States stands on all of these issues,” he said.

Mr. Biden also told Mr. Putin that the U.S. is prepared to provide additional defense assistance to Ukraine in the event that its sovereignty is violated, Mr. Sullivan said. He also warned about the potential for additional deployment of military supplies and capabilities to members of the North Atlantic Treaty Organization, particularly Baltic nations, Romania, Poland and others near Russia that “will be increasingly concerned about the security and territorial integrity of their countries.”

Yury Ushakov, a presidential aide to Mr. Putin, characterized the talks as frank and businesslike in tone. At the same time “there was a place for jokes, for the exchange of compliments,” he said.

The Kremlin said the talks focused on the Ukrainian crisis and the lack of progress in the 2015 diplomatic talks, known as the Minsk process, aimed at securing a peaceful settlement in Donbas. Mr. Putin expressed concern about what Moscow sees as provocative actions by Kyiv against Donbas and accused Ukraine of sabotaging the peace process, Mr. Ushakov said.

Mr. Biden has been working in tandem with members of NATO to defuse the increasingly tense developments in Eastern Europe. A Russian invasion of Ukraine would be one of the most significant military actions in Europe since the Cold War’s end, posing a security challenge for the European Union, Western European powers and NATO.

The European Union will also scale up and expand sanctions in response “to any further aggression including breaches of international law and any other malicious actions taken against us or our neighbors, including Ukraine,” European Commission President Ursula von der Leyen said in a statement.

Fears of a Russian invasion of Ukraine grew last week, with U.S. officials citing new intelligence reports about a troop buildup on the border. The expected total force of 175,000 troops Russia is planning to assemble would be roughly twice the size of a buildup in the spring, the officials said. The U.S. has shared that intelligence with allies, the senior U.S. official said.

Several Biden administration officials, including Mr. Sullivan and Central Intelligence Agency Director William Burns, said this week that the U.S. hasn’t determined whether Mr. Putin has decided to invade Ukraine. They point to his intensifying public rhetoric, coupled with troop movement near the border with Ukraine, as posturing for possible execution. Mr. Putin is assembling a potent military force and may see an opportunity to act this winter, Mr. Burns said.

In their call, Mr. Putin told Mr. Biden that Russia shouldn’t have to withdraw troops from its own territory when “they do not threaten anyone,” Mr. Ushakov said. “Putin said that you, the Americans, are worried about our battalions on Russian territory thousands of kilometers from the United States.”

After the call with Mr. Putin, Mr. Biden briefed the leaders of France, Germany, Italy and the U.K., the White House said, the second time this week they have discussed Russia’s military buildup. The five Western leaders agreed “on a coordinated and comprehensive approach,” the White House said.

Ukraine has become a flashpoint in deteriorating ties between Russia and the U.S. since Moscow annexed Ukraine’s Crimean Peninsula in 2014 and threw its support behind armed separatists in eastern Ukraine. The latest tensions have reached a boiling point, political analysts said. Mr. Putin has long believed that Russia has historic territorial claims over Ukraine and has seen any support by NATO allies for Ukraine’s pro-Western government as a direct challenge to those claims.

Strains within the Western alliance have complicated efforts to forge a common position over Russia. Chief among the issues is the Nord Stream 2 gas pipeline, which Germany and Russia are moving to complete and the Biden administration has begrudgingly accepted.

In July, the government of Angela Merkel, Germany’s outgoing chancellor, cosigned an agreement with the Biden administration committing to taking action against Russia should it “attempt to use energy as a weapon or commit further aggressive acts against Ukraine.”

Germany’s new chancellor, Olaf Scholz, will be sworn in on Wednesday, and it remains unclear how his government will proceed in this crisis. Mr. Sullivan said the administration has held “intensive discussions” with the outgoing and incoming German government on the issue.

Mr. Sullivan said discussions surrounding the pipeline are a priority.

Post Views: 79
Previous Here are five takeaways from the Biden-Putin call.
Next Biden Says Sending U.S. Troops to Ukraine ‘Not on the Cards’