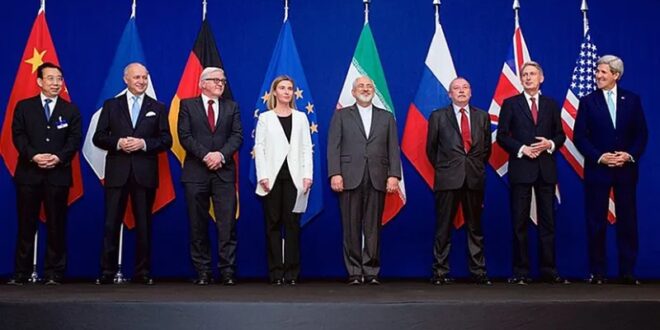 West Must Learn From Its Iran Nuclear Deal Mistakes – OpEd

The failure of the 2015 nuclear deal, known as the Joint Comprehensive Plan of Action, should have taught the US, France, Germany and the UK several lessons when it comes to dealing and negotiating with the Iranian regime. If the West wants to reach an enduring agreement with Tehran, it should show that it has learned from its mistakes.

This means that any nuclear deal with Tehran must not be transitory, which is what the Iranian regime wants it to be.
The primary objective of the nuclear talks was to halt Iran’s nuclear program permanently, hence eliminating the possibility of a nuclear arms race in the region and removing the strategic threat that a nuclear-armed Iran might pose in the region via its hegemonic ambitions, thereby shifting the balance of power and creating new alliances.

Unfortunately, the 2015 JCPOA, which the Biden administration, Germany, France and the UK are currently trying to revive, fundamentally moved away from this key goal. At the time, as the Obama administration attempted to add to its Middle Eastern achievements, the Iranian nuclear team managed to obtain an unprecedented number of compromises from the White House, removing crucial restrictions on Iran’s nuclear program, lifting sanctions and ensuring it had the ultimate legal right and international legitimacy to become a nuclear threshold state.

The objective of permanently halting Iran’s nuclear program unfortunately morphed into limiting Tehran’s nuclear ambitions for a set period, while removing sanctions and ultimately rewarding the theocratic regime with the sunset clauses.

The Biden administration has suggested extending the sunset clauses from 15 years to 25 years. But this would still be a transitory agreement that would allow the regime to resume enriching uranium at any level it chooses, spin as many advanced centrifuges as it wants, make its reactors fully operational, build new heavy water reactors, produce as much fuel as it desires for its reactors, and maintain higher uranium enrichment capability, with no restrictions after the period of the agreement. In other words, the sunset clauses will most likely ensure that Iran will be a nuclear state after the 15 or 25-year period, assuming that Tehran will not covertly violate the rules in the meantime. After the expiration of such an agreement, Iran would be rewarded with an unrestricted nuclear program.

Technologically speaking, after Iran becomes a nuclear threshold state, it takes only a matter of weeks to produce weapons-grade material. In fact, the regime hopes for such a temporary agreement, as it would allow Tehran to enrich uranium and be free of sanctions.

A second mistake that needs to be learned from is the decision to lift all sanctions against Iran on the first day of the agreement. When this happened in 2015, the West lost all leverage against the regime and Iran immediately rejoined the international community and increased its oil sales and trade revenue, strengthening the ruling clerics’ hold on power and eliminating the economic danger that had been causing potentially revolutionary domestic unrest.

In 2015, the Iranian regime received an extremely favorable deal from the P5+1 powers, as all four rounds of UN sanctions, which took decades and a significant amount of political capital to put in place, were lifted on day one of the nuclear deal. This move by the Obama administration, which led the negotiations, was a result of misguided diplomacy and was politically and strategically dangerous.

If all sanctions are lifted immediately and Iran later decides to breach the terms of the deal, it would be extremely difficult to again find consensus in the UN Security Council on imposing sanctions on Tehran.

Finally, Iran’s ballistic missile program is interconnected with the nuclear program. The international community witnessed how the Iranian regime expanded and launched far more ballistic missiles after the 2015 nuclear deal, despite UN Security Council Resolution 1929, which states: “Iran shall not undertake any activity related to ballistic missiles capable of delivering nuclear weapons, including launches using ballistic missile technology, and that states shall take all necessary measures to prevent the transfer of technology or technical assistance to Iran related to such activities.”

In conclusion, any new deal with the Iranian regime must permanently bring an end to its nuclear threats and defiance, allow for sanctions to be lifted gradually, and also restrict Tehran’s ballistic missile program.