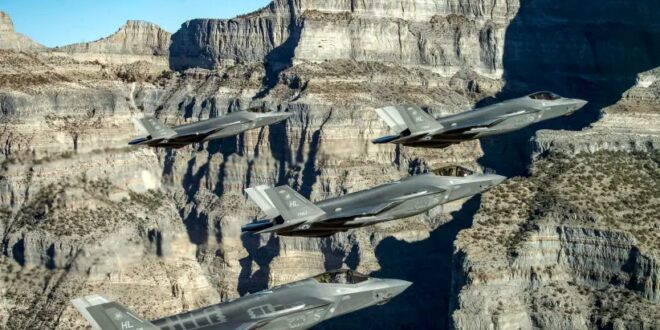 Would the UAE really walk away from prestigious F-35 deal? – analysis

The UAE wants the F-35s but not at a cost that would mean it can’t use them as it wants.

The United Arab Emirates is prepared to halt acquisition of advanced fifth-generation F-35 aircraft, according to reports published this week in The Wall Street Journal.

The prestigious and important deal was announced last year around the time of the Abraham Accords, raising eyebrows in the Middle East and Washington.

In late September 2020, the UAE submitted a formal request to purchase 50 of the aircraft. The deal would include 18 Reaper drones as well.

The US has often prevented sales of its advanced armed drones abroad, leading many countries to acquire Chinese and other drones instead.

It appeared the UAE acquisition would move forward quickly with White House approvals in October 2020, and other approvals from the State Department in November, fast-tracking the decision. However, there was grumbling and criticism of the deal.

A variety of voices claimed the deal was problematic. One argument was that large arms sales like this might fuel some kind of arms race in the region and stoke more Iran tensions.

This argument makes no sense because Iran and other countries are already racing forward with arms development, such as drones and missiles. There is already an arms race.

Another argument was that the deal would further entangle the US in a region that the US was trying to leave. The US wants to pivot to near-peer rivalry with China in Asia. Many commentators see the Middle East as a sunk cost.

The US waged 20 years of Global War on Terror in the region. Now, having fueled war and conflict, the US wants to leave, the argument says. And the US should walk away without bothering to secure friends and allies, this illogical argument states.

A further assertion was that the deal might erode Israel’s Qualitative Military Edge, a doctrine that says the US should supply Israel with advanced weaponry to keep it qualitatively above its adversaries. The UAE is not an adversary, and the Abraham Accords helped pave the way for this new reality.

After all, the US had considered selling F-35s to Turkey, and no one suggested at the time this would erode Israel’s edge. Turkey is more harshly opposed to Israel’s policies today than the UAE.

So what happened? The UAE reportedly told the US it could suspend discussions on the $23 billion deal. Reports on this, from the WSJ to other outlets, indicate there are a variety of reasons for the suspension and hurdles.

One issue, The South China Morning Post said, is that the deal had slowed over “Abu Dhabi’s relationship with China, including use of Huawei 5G technology in the country.”

The WSJ wrote that “technical requirements, sovereign operational restrictions, and cost/benefit analysis led to the reassessment,” according to a UAE official quoted in the piece.

The UAE is also buying other aircraft. A $15b. deal with France will see it acquire 18 Rafale warplanes. The Rafale is not a replacement for F-35s, so this purchase is not really an alternative, but it is important. The fact is that the US, UK, and France have been jockeying for some arms sales recently after the AUKUS announcement related to submarine sales to Australia.

The UAE and US are committed to each other. The UAE wants the F-35s but not at a cost that would mean it can’t use them as it wants, and there may be concerns and hurdles from the US side that makes the purchase too complex.

This may relate to the China issue, as the US has insisted to its partners in the region that other deals they make with China needed to have a kind of cordon sanitaire around them, making sure there is a wall between China’s role and important US technology in the region, or important strategic areas like ports and airports.

Chinese construction at Abu Dhabi port, for instance, has been one US concern. CNN reported on November 19 that construction was halted on a “secret project at Chinese port in UAE.”

US Pentagon Press Secretary John Kirby spoke to reporters on December 14. He was asked a number of times about the F-35s.

“I’ve seen the reporting,” he said. “The US partnership with the UAE is more strategic and more complex than any one weapons sale. We are committed to working with the UAE to address their and our questions with respect to this sale. We are always ready to discuss this sale and any potential sale with our Emirati partners.

He emphasized that “end-use requirements are typical for every foreign military sale, but they’re not all the same, because it depends on what you’re selling and how that item is going to be used. So again, I’d point you to the State Department, their Bureau of Political-Military Affairs. They run the foreign military sales program, and they are a much better source for you than the Department of Defense on this.

“But end-user requirements are not atypical; they are in fact standard, as you would expect them to be. We have obligations to the American people and to our own national security interests when we engage in the sale of weapons and systems.”

What this means is that a country acquiring US systems, platforms or munitions may face some hurdles in their use.
Nevertheless, the US State Department was said to be committed to the sales. “We are hopeful that we can work through any outstanding issues,” the official said, according to the WSJ report.

WHAT HAPPENS next is unclear. The UAE cares about the aircraft but wants to make sure its technical requirements are met, according to Al-Ain media in the UAE. There is a reference to “restrictions on operations,” in the Al-Ain report. This may be the “end-user” issue referred to in US media and the Kirby discussion. Many militaries would be concerned over requests that they have to ask permission for important operations using an aircraft.

US Secretary of State Antony Blinken was in Malaysia on Wednesday, and reports indicated that the State Department still backs the deal.

“We’ve wanted to make sure, for example, that our commitment to Israel’s qualitative military edge is assured, so we wanted to make sure that we could do a thorough review of any technologies that are sold or transferred to other partners in the region, including the UAE,” Blinken said.

The issue of Israel’s military edge appears to be less important than the “technologies” that are “sold or transferred” in this case. This appears to be a reference to concerns about China.

The issue here with the F-35s is multilayered. It comes as reports indicate Israel will have to wait years for the KC-46A tanker aircraft it has also sought from Washington. That aircraft is key to long-range missions. Israel procrastinated in its purchase of the aircraft. But the overall story is how slow procurement deals can be.

Consider the US decision to unravel Turkey from the F-35 program, after Turkey acquired Russia’s S-400s. A lot of lobbying by Ankara went into trying to get the US to let Turkey have S-400s from Russia and US F-35s. Turkey would constantly leak details about the US going back on its decision.

Another issue is drone sales. The US has often been reluctant to sell armed drones. Countries have been asking for them for decades. The US kept even key partners and allies waiting. So, many countries in the region turned to China. Turkey built its own armed drones. Meanwhile, India is also buying S-400s from Russia.

It should be remembered that there are voices from the region that oppose the UAE – critics who are ideologically closer to Turkey or Qatar. Throwing wrenches into any armed sales benefits them as well. However, in recent months UAE-Turkey ties have improved, and the Gulf countries are working with Qatar once again.

The US has a kind of Janus face on these deals. On the one hand, it is nonplussed to see countries that are US partners going to China and Russia for arms. On the other hand, the US is slow to provide options to sell. There simply are no Patriot systems that were ready to be sold going to Turkey or India.

According to recent reports, the US has also pulled air defense from Saudi Arabia, which is “pleading” for missile defense resupply from the US in the face of attacks from Iranian-backed Houthis in Yemen. This isn’t just an “end-user” issue; this is air defense, and key US partners like Riyadh are concerned.

However, US commentators who were once supportive of Saudi Arabia in the 1990s have turned on Riyadh in the last few years. While the anti-Saudi voices in DC today claim to care about human rights, they tended to like the kingdom a decade ago when it was accused of the same rights violations as it is today.

Their concerns relate to shifts in US global policy, fatigue with dealing with the Middle East and its “endless wars” or conflicts that “date back millennia,” as one president said, or wasting US forces on “ancient conflicts in faraway lands that many people have never heard of,” as another recent US president said.

Countries that wanted to be US allies and partners are left hearing that they are “not allies” from commentators at prestigious think tanks in Washington, while the same think tanks slam them for trading with China.

On the one hand, they are told they won’t get air defense and will be kept waiting for decades to get arms, drones or other systems, while their adversaries build up forces. On the other hand, they are told not to buy from others or risk the long-term deals they wanted.

They then look to France, Russia, China or anyone else that might be willing to meet their needs. These are the complex problems facing procurement plans throughout the Middle East and extending to neighboring regions.

While the UAE may work through its discussions with Washington, the larger story relates to tectonic shifts that stretch from India to Turkey.

The F-35 is a prestigious and unique aircraft. Its abilities cannot be simply swapped for French aircraft. It’s also an expensive aircraft, and its development has been critiqued in the US. Israel, however, has become a devoted user of the F-35 and appears to want more planes.

There are other advanced US aircraft, like F-15s and F-16s, but they, too, are not replacement options for the F-35 for countries like the UAE. According to recent data, there are more than 705 F-35s around the world today, flown by nine countries operating from 21 bases worldwide.

Users include the US, UK, Israel, Italy, Australia, Norway, Japan, South Korea, and the Netherlands. Singapore, Belgium and Poland have also procured the aircraft. Singapore has only purchased four of the planes.

The UAE might consider a scaled-down deal so as to be knitted into the strategic US program, but not lean so heavily on an aircraft that presents it with technical and end-user concerns. So far that doesn’t seem to be in the cards.

Post Views: 175
Previous ‘Entire Muslim world’ will recognize Israel if it withdraws to 67′ line
Next Blinken says US ready to move forward with sale of F-35s, drones to UAE