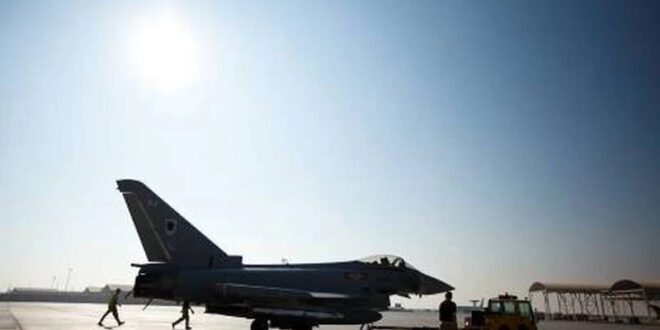 An anti-ISIS coalition shot down a terrorist drone near a base in southern Syria this week, military officials said.

Two RAF Typhoon FGR4s were patrolling over Syria and Iraq on Tuesday, as part of the global coalition against ISIS, and were ordered to investigate hostile drone activity near the Al Tanf military base.

The pilots identified a small hostile drone and shot it down using an advanced short range air-to-air missile.

Tanf is the only position with a significant American military presence in Syria outside the Kurdish-controlled north.

US Navy Capt Bill Urban, a spokesman for US Central Command, said two drones entered the Al Tanf garrison “deconfliction” zone on Tuesday and one of them was shot down as it moved closer to the base.

There were no casualties or damage to facilities, he said.

It was the first operational air-to-air engagement conducted by an RAF Typhoon, and the first air-to-air missile firing during Operation Shader, which is targeting the remnants of ISIS in Iraq and Syria.

The UK’s Defence Secretary Ben Wallace said: “This strike is an impressive demonstration of the RAF’s ability to take out hostile targets in the air that pose a threat to our forces.

“We continue to do everything we can alongside our coalition partners to stamp out the terrorist threat and protect our personnel and our partners.”

It was not immediately clear who was responsible for the drone, but Iran-backed forces have frequently attacked allied troops with drones and rockets in eastern Syria and Iraq.

In October, several drones were launched against the base, although there were no American casualties.

There is concern among US officials that Iranian-backed militia may increase attacks on troops in Iraq and Syria in the coming weeks, in part to mark the anniversary of the killing of top Iranian general Qassem Soleimani and Iraqi militia commander Abu Mahdi al-Muhandis.