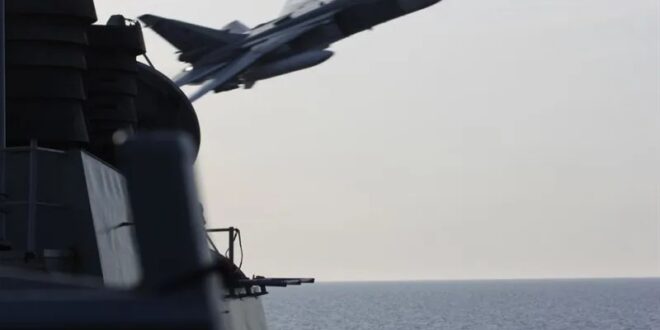 NATO has wrestled with how to defend its Baltic member states of Estonia, Latvia, and Lithuania ever since their accession to the Alliance in 2004. All three militarily weak countries sit uncomfortably close to NATO’s main adversary, Russia. Making matters even worse, they are tenuously connected to the rest of NATO by only two roads that run through a 100-km wide corridor, often referred to as the Suwałki Gap, between Lithuania and Poland. Should a conflict occur, Russia could sever the gap, leaving NATO with only one other route over which it could quickly send substantial reinforcements to its easternmost members: the Baltic Sea.

However, on the sea’s southern coast is Russia’s Kaliningrad Oblast, a Russian enclave which hosts sizable military forces that could easily interdict the transit of such NATO reinforcements. And, since the early 2010s, those forces have become ever more assertive throughout the region, mounting numerous aircraft incursions into the airspace of NATO’s Baltic member states, not to mention a submarine incursion into Swedish waters in 2014 and possibly another into Finnish waters in 2015. As a result, the larger trio of NATO countries along the Baltic Sea — Denmark, Germany, and Poland — have slowly started to rebuild their navies and prepare them for a fight across the sea if the need arises.

As maritime operating environments go, the Baltic Sea has always been a challenging one. During the winter, almost half of it freezes, restricting movement. And though it covers some 21,700 square kilometers, the sea’s most strategically important portion — stretching from the Kattegat Strait near Denmark to the Gulf of Riga near Estonia and Latvia — is little wider than 200 km, well within the range of most modern anti-ship missiles. That makes it difficult for any surface ship, whether transport or warship, to transit without coming under threat of missile attack. At the same time, the highly variable salinities of the waters themselves complicate anti-submarine warfare, making submarine attacks harder to prevent, despite the sea’s relatively shallow average depth.

No doubt, Russia has sought to capitalize on the strategic location of Kaliningrad Oblast. Along its coast, Russia has deployed at least one Bal mobile coastal defense battery and one K-300P Bastion-P mobile coastal defense battery. Given that the former is normally equipped with 32 Kh-35 (SS-N-25) anti-ship missiles and the latter with eight 3M54 Kalibr (SS-N-27) anti-ship missiles, together they could launch salvos of 40 missiles at NATO forces sailing across the Baltic Sea. Meanwhile, Russia has stationed in Kaliningrad at least two squadrons of Su-24 attack and Su-27 fighter aircraft, collectively capable of launching as many as three or four dozen more anti-ship missiles.[1]

Though much of Russia’s anti-access area denial capability in the Baltic Sea is clearly concentrated in its ground and air forces, one should not overlook the Russian Baltic Fleet. Since the late 2000s, the fleet has added one Project 11540 (Neustrashimy-class) frigate as well as four Project 20380 (Steregushchiy-class), three Project 22800 (Karakurt-class), and two Project 21631 (Buyan-M-class) corvettes — all of them armed with multiple Kh-35 or 3M54 missiles. Reportedly, it will soon add another three Karakurt-class corvettes as well as one Project 636.6 (Kilo-class) diesel-electric attack submarine to its order of battle. With so many new guided-missile warships, Russia’s Baltic Fleet may have actually grown stronger, despite the fact that its rapid retirement of older warships has left it smaller than it once was.

Responding to Russia’s new capabilities and assertive behavior in the Baltic Sea, NATO has had to reconsider its traditional maritime posture. During the Cold War, NATO’s naval forces in the region were largely arrayed to protect the eastern approaches to the Kattegat Strait. Today, however, they might be called upon to force a passage past Russia’s Kaliningrad Oblast to deliver reinforcements to Estonia, Latvia, and Lithuania. Hints of that shift have become visible in the naval procurement decisions of NATO countries around the Baltic Sea.

Denmark, for example, built three Iver Huitfeldt-class frigates with large vertical-launch magazines of SM2 and RIM-162 surface-to-air missiles that are capable of intercepting anti-ship missiles. Meanwhile, Germany has plans to add a second batch of five Braunschweig-class corvettes, which are also equipped with robust anti-missile defenses in the form of two Mk 49 launchers armed with 42 RIM-116 missiles, to its fleet of corvettes based at Warnemünde by the early 2020s. Plus, it intends to add two Type 212CD diesel-electric attack submarines, equipped with air-independent propulsion (AIP), to its six submarines based at Eckernförde. And, in perhaps the clearest sign that NATO is preparing for the reinforcement of its Baltic member states, Denmark and Germany have collaborated under their Ark Project to charter seven roll-on-roll-off transports to facilitate the fast sealift of cargo and troops.

NATO’s Eastern European members have also worked to bolster their navies. Poland expects to acquire two or three new diesel-electric attack submarines as well as three new multirole frigates under its Project Miezcnik. In the meantime, Estonia, Latvia, and Lithuania focused their naval efforts on mine warfare, both offensively to screen strategic chokepoints, like the Hari Kurk, Soela, Suur, and Väike Straits, and defensively to keep other passages open to seaborne reinforcement. Denmark, the Netherlands, Norway, and the United Kingdom have all helped, transferring a Lindormen-class minelayer and three Sandown-class minesweepers to Estonia; a Vidar-class minelayer and five Tripartite-class to Latvia, and a Vidar-class minelayer and two Hunt-class minesweepers to Lithuania.

Though Sweden and Finland are ostensibly neutral and neither country is a NATO member, both have maintained close ties to other Scandinavian countries that are. The two countries regularly join Denmark, Iceland, and Norway in military exercises. In fact, over the latter half of the 2010s, Sweden has edged closer to security coordination with NATO. And that is fortunate for the Alliance, because Swedish cooperation may be needed if NATO is to mount a successful relief mission to the Baltic region.

Concerned over Russia’s increasingly assertive behavior in the Baltic Sea, Sweden has also taken steps to strengthen its strategic position in the region. Starting in 2018, it began reactivating army and air defense units on the strategic island of Gotland in the Baltic Sea. It also committed itself to procuring more A26 AIP-equipped diesel-electric attack submarines as well as six new Visby-class guided-missile corvettes for its fleet. And while Finland practices a stricter sort of neutrality than Sweden, it has sought to beef up its navy too. In 2019, Helsinki shifted away from its typical acquisitions of fast attack craft and minelayers, and moved towards larger and more capable corvettes.

The potential for Russia to deny NATO access to the Baltic Sea long enough for Russian ground forces to seize Estonia, Latvia, and Lithuania is a serious concern for the security alliance. That is the reason why NATO has deployed “forward presence” battlegroups to its Baltic member states; supported Poland’s efforts to strengthen its army near the Suwałki Gap; and conducted cross-continent mobility exercises to practice the movement of large combat formations from Western Europe to the Baltic region. And at sea, it is the reason why NATO countries have devoted more attention to their navies in the Baltic Sea.

Certainly, recent NATO naval exercises have put greater focus on how to overcome Russian barriers in the region. Indeed, that was the overarching theme of the BALTOPS 2021 exercise: “Break into the Baltic.” Meanwhile, Sweden has gone so far as to invite several NATO countries to participate in its Baltic Sea exercises in 2020 and 2021. On the other hand, Russia has not stood idly by. In 2017, it held parts of its massive quadrennial Zapad military exercise in Kaliningrad Oblast. Two years later, the Russian navy staged its large-scale Ocean Shield 2019 exercise in its nearby waters. That exercise included not only 49 warships, but also live missile firings from its coastal defense batteries. With tensions rising in the Baltic Sea, a return to the tranquility that prevailed over its waters after the Cold War looks ever less likely.

*About the author: Felix K. Chang is a senior fellow at the Foreign Policy Research Institute. He is also the Chief Operating Officer of DecisionQ, a predictive analytics company, and an assistant professor at the Uniformed Services University of the Health Sciences.