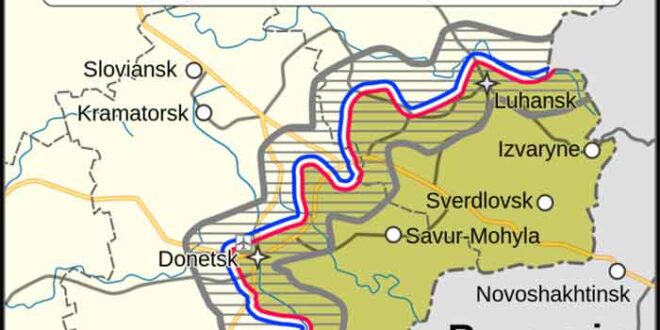 Spectre of war is haunting Europe

A fateful week is ending today for international security with the Russian Foreign Ministry releasing the two documents on security guarantees that Moscow had proposed to Washington as the basis for discussions to ease the tensions over NATO’s eastward expansion and to cease the alliance’s deployments close to Russia’s borders, including in Ukraine.

Out of the two documents, one is a draft treaty with the US which contains the following six provisions:

The second document is in the nature of a multilateral agreement with the member countries of the North Atlantic Treaty Organisation (NATO). It also contains 6 provisions, which are:

Russia’s proposals are true to its stated position spelt out in great detail and repeatedly in the recent months seeking security guarantees from the West against the backdrop of larges scale military deployments by the NATO countries in the countries of Central Europe and the Baltic states in the recent years, and, secondly, amidst the growing signs that NATO is preparing further eastward expansion that may include Ukraine, Georgia and Black Sea.

The latter part is crucial for Russia’s security as NATO (read the US) is almost certain to deploy nuclear missiles in Ukraine and Georgia, which would give it decisive tactical advantage to take Russia by surprise by launching a nuclear attack (since the flight time will be extremely short and Russia’s reaction time becomes correspondingly shortened, and, secondly, the tactical missiles of intermediate range would be in a position to hit deep inside Russian territory.

It was a foregone conclusion that the US will never agree to a security treaty of the kind Russia has proposed, because the NATO expansion — in contravention of the assurances given to Mikhail Gorbachev at the time of German unification that the alliance would not expand “an inch” beyond the Cold War era level in the late 1980s — is a long-term US strategy to gain unilateral advantage over Russia and tilt the global strategic balance in favour of the West, which would put Moscow on the defensive in its foreign and security policies.

In sum, the Western strategy is to dictate to Russia from a position of strength. Moscow has been protesting. But the NATO and the US chose to ignore Russia’s protests and kept expanding in stages since 1997. Today, an intolerable situation has arisen for Russia as the NATO forces are virtually at its gates. The developing situation is reminiscent of the 1962 Cuban Missile Crisis when Washington threatened to militarily stop Soviet missile deployments in Cuba.

The Biden administration’s strategy is to first weaken Russia’s global reach and strategic capability and thereupon tackle the challenge of China’s rise. The Biden Administration is taking a gambit that China will remain neutral in the upcoming confrontation between the West and Russia. But President Xi Jinping’s initiative to hold a virtual meeting with President Putin on Wednesday has signalled that Beijing is backing Russia.

The Chinese Foreign Ministry spokesman Wang Wenbin’s remarks in Beijing today point in such a direction. Interestingly, Ambassador Wang was responding to a pointed question from the Tass news agency. The relevant extracts are reproduced below:

TASS: “In his virtual meeting with Russian President Putin, President Xi Jinping said China will continue to carry out flexible and diverse cooperation with Russia and other member states of the Collective Security Treaty Organization to safeguard security and stability in the region. What challenges are China and Russia facing in this aspect? What can China and Russia do to safeguard regional security?”

Wang Wenbin: “On December 15, President Xi Jinping had a virtual meeting with Russian President Putin. The two head of states had an in-depth exchange of views on core and major issues of common concerns including safeguarding regional security, and achieved new, important consensus.

“The world is witnessing the combined forces of changes and a pandemic both unseen in a century against the backdrop of complex and profound changes in international and regional landscape. We believe that China and Russia, two permanent members of the UN Security Council, take on important mission in defending regional peace and stability and promoting development and revitalization of all countries. For some time, certain countries have been drawing ideological lines, building new military blocs and stoking regional tensions, which have all brought grave threats and challenges to regional peace and stability and global strategic stability. China and Russia firmly reject this. We will continue to follow the two leaders’ consensus, take up responsibility, unite all forces that love peace and support peace, and make active contribution to realizing sustained, universal and common security in the region and the wider world.”

The release of the two documents in Moscow earlier today implies that Moscow is under no illusions that the US strategy is about cornering Russia and browbeat it on the global stage.

A grave crisis is developing in international security, since from this point, Moscow’s options are narrowing down to“coercive diplomacy” in the pursuit of its security needs. In sum, there is real danger of military confrontation with the NATO powers, since the US, Britain, France, etc. have already deployed special forces on Ukrainian soil, which will act as “trip wires”.

In a series of highly provocative remarks on Thursday, NATO Secretary-General Jens Stoltenberg has asserted the alliance’s prerogative to intervene in Ukraine and bluntly rejected Moscow’s notions that it could have a say on the alliance’s future expansion plans.

Stoltenberg spoke with the prior approval of the Biden Administration. Moscow’s decisions to release the security documents has come a day later. The White House spokesperson Jen Psaki has since reacted, virtually endorsing Stoltenberg’s tough line.