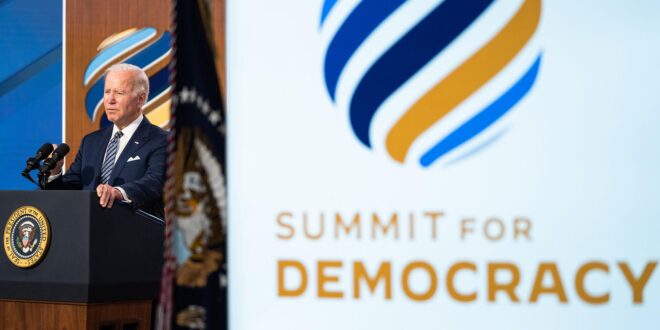 Last week’s Summit for Democracy hosted by President Biden was a call to action. The first-ever international convening of its kind, it offered democratic leaders an opportunity to announce political commitments to reform over the coming year, and to begin to share experiences and learn from each other in a more deliberate way than has been the case to date. Given the unprecedented threats facing democratic systems worldwide, it was an important and timely step. What is less clear is what the summit entails for a particular subset of aspiring democracies: countries currently or recently affected by civil war that are transitioning to democracy.

Much of the attention and media coverage of the summit focused on how it relates to strategic competition between the United States and Russia and China. Neither China nor Russia received an invitation, but Taiwan — over which China claims sovereignty — did. In protest, the Chinese and Russian ambassadors to the U.N. decried the event in a joint statement, while Beijing hosted a dialogue of its own, touting its political system as superior to Western democracy.

Beyond geostrategic rivalry, how does the summit address the growing number of countries — including many emerging democracies — that are experiencing or recovering from armed conflict around the world? The question is relevant because their trajectory is also key to managing international peace and security. As civil wars have increased worldwide and become increasingly complex, so has the risk that major powers like the United States will become embroiled in a regional conflict. There are now more internationalized wars than at any time since World War II. More of these conflicts are providing safe-havens for terrorist networks and as the International Rescue Committee warned this week, they have resulted in an unprecedented 84 million people forced from their homes and 20 million people facing famine.

The good news is that the summit agenda focuses on several of the governance challenges that are critical to supporting pathways out of fragility and conflict. First among these is anticorruption, which the administration proposes to address through an ambitious new global strategy. Anticorruption can help increase confidence in public institutions — and is particularly important in divided societies where the state’s administrative capacity is weak. Anticorruption can restrict flows of illicit funds to the armed groups, predatory elites and criminal networks that often act as violence entrepreneurs. Supporting public financial management in conflict-affected states is critical to curtailing corruption in these countries and to helping them generate tax revenue, without which countries lack the resources to deliver for citizens. This can perpetuate protracted cycles of violence.

In short, combatting corruption is critical not only to prevent the diversion of billions of dollars that could otherwise be spent on economic development every year, but it is also crucial to defunding the violent groups that sponsor and prolong civil wars. The Biden administration’s truly pathbreaking proposal for tackling the challenge globally will be a game changer if the United States can lead a global effort to implement it.

Another area that is key to supporting fragile states is bolstering democratic reformers inside and outside government. Recent research shows that one reason transitions out of fragility go off track is that reform-minded political leaders lack the training and management skills to see their reform agendas through. Providing these leaders with the skills and other support they need to navigate delicate political openings that are ripe for reform is critical. Ensuring women’s participation post-conflict recovery programs can help to secure stable peace. In addition, supporting independent media and journalists in situations of fragility can improve the impact of diplomacy, mediation efforts and assistance programs by increasing policymakers’ understanding of the situation on the ground. And supporting broad coalitions of citizen movements that seek to engage in nonviolent action is an effective tool both to promote political reform and to prevent crises.

Many of the world’s unstable and post-conflict countries were left off the summit invitation list and won’t benefit from the foreign assistance or collaboration that were announced last week. Their omission is not entirely surprising, given that conflict is associated with fragility and governance failures, which means many didn’t make the cut. Yet despite the growing number of conflicts worldwide, of the 111 countries that were invited, only 18 are conflict-affected. Several countries that rank in the top 100 in terms of their performance on governance indices, but are fragile, did not receive an invitation. This includes states still emerging from devastating civil wars, like Sri Lanka and Sierra Leone, as well as countries in the midst of war or insurgency, such as Burkina Faso.

There have no doubt been democratic reversals in these countries in recent years, such as in Tunisia, where President Kais Saied recently dismissed the elected government and has suspended the parliament. But a U.S. approach that appears to hold fragile states to a higher democratic standard than other countries makes little sense. As a groundbreaking World Bank and U.N. report on conflict prevention underscores, “a society’s pathway moves through a variety of situations that present risks and opportunities for maintaining a peaceful path … These pathways are never linear.”

Because civil wars are increasingly shaped by global trends and transnational actors over which domestic leaders have limited influence, there is a strong case for being more rather than less inclusive of fragile states when it comes to working multilaterally to uphold democracy and promote difficult reforms. Their participation is not merely symbolic. Fragile states stand to benefit most from the peer-to-peer engagement that democratic leaders have pledged to take part in over the coming year, and which was already on display during last week’s meeting. For example, government representatives from fragile states would have particularly benefited from a briefing by Ghanaian President Nana Akufo-Addo about how his country has successfully — and democratically — navigated the COVID pandemic.

The initiatives and new funding that were announced last week are significant, yet the summit was a missed opportunity to demonstrate that the administration intends to take a well-tailored approach to supporting democratic transitions in fragile states. The risk that well-intended efforts backfire is higher in these contexts, a lesson the international community learned at great cost in Afghanistan. Supporting reforms requires a different approach, starting with more rigorous conflict analysis than U.S. agencies currently apply. Poorly-designed anticorruption efforts can destabilize fragile peace processes. Premature elections can pull countries right back into war. And security sector governance has an outsized impact, since the sector can be both a trigger for grievances and an instrument for predatory elites to stay in power. This is an area in which the United States has a lot of leverage as the world’s leading provider of assistance in this sector, yet this aid is not fit-for-purpose, in part because it tends to undermine democracy and human rights, particularly in fragile contexts.

Some programs will certainly yield results in fragile states, such as for example the new flexible assistance that will allow the State Department and USAID to surge support for reformers. But adaptive approaches that are designed specifically for fragile contexts, for example by building on the achievements and shortcomings of the Office of Transition Initiatives (OTI) program, are largely missing from the otherwise strong package of initiatives that the administration announced last week.

The jury is still out as to what the summit and next year’s follow-on meeting will ultimately deliver for citizens around the world, including here in the United States, but last week’s meeting was a promising start. To have real impact in the world’s fragile countries, additional U.S. commitments over the coming year could include enhancing U.S. analytical capabilities so agencies can not only better understand how corruption undermines the prospects for democratic governance, but also how graft and patronage networks fuel conflict, and how to design conflict-sensitive anticorruption programs. Committing to mainstream conflict-sensitivity across the $425 million pledged to support democratic governance would go a long way toward ensuring that U.S. aid is dual-purposed to build democracies that are resilient to shocks, including from instability. This is particularly important in the security sector, as others have argued.

The State Department should also engage with more leaders in fragile states over the coming year to encourage them to join this important multilateral effort. Unlike with other countries that have the capacity to reform, the emphasis should be on how the international community can better support their democratic transitions. The United States should explore a new initiative designed specifically for these countries that prioritizes administrative capacity building and leadership training, or that builds on and extends short-term OTI programs over a longer time-horizon, perhaps using funds made available to the administration under the Global Fragility Act. The administration could also use those funds to support the establishment of a new multilateral forum that is specifically designed to enable peer-to-peer learning among democratic reformers in fragile states. Such a platform could be embedded in the Open Government Partnership (OGP), for example, but would need substantially more donor support than the OGP receives.

These and other measures will be needed to ensure that the democracy summit and follow-on efforts deliver for the world’s most vulnerable citizens, for whom democracy remains mostly out of reach.