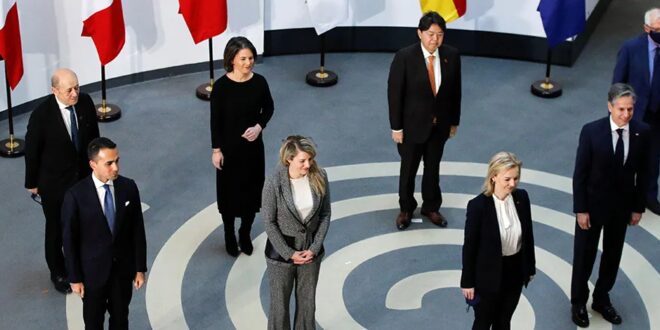 The G7 talk of severe sanctions against Russia hides an inconvenient truth. To be effective, sanctions must hurt Western economies too.

As Russian military assets mass on the border with Ukraine and tensions rise between the Kremlin and Western allies, ‘economic measures’ are emerging as one of the West’s biggest threats aimed at deterring military advances and inflicting ‘severe consequences’ on the Russian economy.

The UK’s foreign secretary, Liz Truss, has cautioned Russia that it ‘would face massive consequences for which there would be severe cost’; US Secretary of State Anthony Blinken has also recently warned that the US response would include ‘a range of high impact economic measures that we have refrained from using in the past’; and President Joe Biden said that a move on Ukraine by Vladimir Putin would result in ‘devastating’ economic consequences. While talk from Brussels has been less hostile, with Russia-related sanctions activity currently focused on placing restrictive measures on the Russian private military company Wagner as a result of alleged human rights abuses in Ukraine, Syria and Libya, the EU has some of the most influential cards to play, notably control over the future of the Nord Stream 2 gas pipeline between Russia and Germany.

Bark but No Bite

From Washington to London and Brussels, sanctions have become a staple of Western foreign policy. New regimes addressing human rights abuses, corruption and cybercrime are increasingly being introduced by allied and likeminded capitals across the globe.

The objectives are mixed and often muddled, yet in most cases, although sanctions are meant to apply financial and other pressures to their targets, those that are subject to these designations have little meaningful economic connection with Western allies. And when there is an economic connection, as in the case of Belarus, the benefit of the trading relationship is one-sided, and thus severing relations has little meaningful blowback on the issuer of sanctions.

To date, the use of sanctions by the West against Russia has been timid and fallen short of what many who support human rights and anti-corruption activists in the country have called for. Even the sanctions deployed against Russia following the Kremlin’s annexation of Crimea and belligerence in Eastern Ukraine in 2014 and its use of a chemical weapon in 2018 on the streets of Salisbury, a town in rural England, were hesitant.

There may be many reasons for this caution, but economics must surely play a part. In contrast to most targets of Western sanctions, Russia presents Western leaders with a conundrum. Despite the Kremlin’s distrust of and animosity towards the West, economic ties are close and wide-ranging. From energy to financial services and chemicals, trade between Russia and those countries seeking to deter Russian aggression is considerable. Russia is the EU’s fifth biggest trading partner; and the UK and Russia have long-standing trade and investment relationships worth £12 billion in 2021. Companies large and small have operations in Russia, covering sales, marketing and manufacturing, as well as a strong retail presence.

Will This Time be Different?

No one can be under any illusion that those designing sanctions in London, Washington and Brussels have been let off the leash. This time, we are led to believe by the robust public messages from capitals that sanctions are being prepared to target financial and economic infrastructure that has previously been spared. Details are naturally limited, but these targets might include ending Russian banking access to all forms of international funding and capital markets; the oft-mooted but thus far off-limits severing of Russian access to SWIFT, the international messaging system that underpins global financial transactions; material disruption of Russia’s access to foreign trade with the West; and suspending the certification of the Nord Stream 2 gas pipeline, something many in the US have long called for.

But there is an inconvenient truth within all of this that – at least publicly – has not been aired. Sanctions issued by Western countries rarely include the need to accept any meaningful self-harm. The case of Russia is clearly different. While there is no doubt that the imposition of ‘unprecedented sanctions’ on Russia will inflict damage on their target, the impact on the economies of the issuers – particularly in the EU – may be significant. At a time when Western economies are struggling to recover from the coronavirus pandemic, are allies prepared for the economic blowback such sanctions might trigger? Furthermore, the difference in negative impact at home varies considerably, from the US, which is relatively isolated from the Russian economy, to the EU, which has – in parts – a high dependency and close links. Creating allied consensus to develop truly coercive sanctions may well prove easier said than done.

If the West really wants to inflict on Russia the ‘massive strategic consequences’ that it threatens, then it needs to prepare its own populations and businesses for the inevitable corollary, ranging from significant energy disruption and possible power shortages through to financial market turmoil and the severing of trade relations, with the resulting detrimental impact on those businesses and livelihoods that rely on these connections. Western governments should be actively preparing for what will inevitably be a very turbulent period in the depths of winter, when their economies are as fragile as they have been for decades.

In recent times, sanctions use has become a means by which the West can demonstrate its role as what former UK Foreign Secretary Dominic Raab was fond of calling ‘a force for good’, calling out the corrupt and human rights abusers who operate beyond the reach of Western law enforcement and justice. But their use had no impact on the sanctions issuer, and thus the consequences at home of those particular sanctions need not be considered.

The current situation presents a very different scenario. If the West’s response to Russian aggression in Ukraine is to be effective, economic consequences at home – particularly in the EU – will certainly be meaningful. This is not an argument for holding back. But if the threat from Western allies is to be taken seriously – which is itself open to question, given that previous egregious acts by the Kremlin have gone relatively unpunished – then the West will need to be willing to commit self-harm, alongside the harm it is committed to inflicting on Russia.

Post Views: 105
Previous The Afghan Debacle Should Prompt China to Revise its South Asia Policy
Next How Russia’s Black Sea Fleet Could Change the Equation in Ukraine