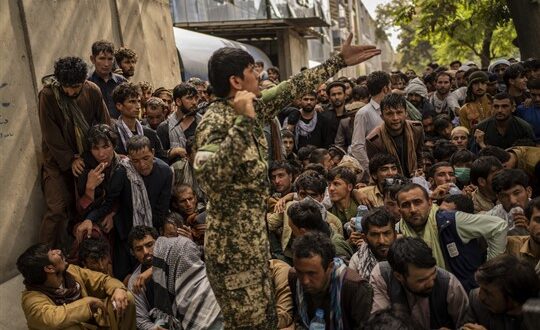 U.S. Sanctions Might Be Easy, but They’re Not Cheap

As 2021 comes to a close, the international community faces several emerging humanitarian and security catastrophes—even beyond the global pandemic that has gripped the world for two years. Ethiopia is undergoing a complex and multifaceted civil war that has spurred a humanitarian disaster of monumental proportions, with nearly 1 million people now living in conditions approaching famine. Meanwhile, Russia has been building up its military presence on its border with Ukraine, increasing tensions with the West and prompting fears that there will be yet another attack on Ukrainian sovereignty. And in the Taliban’s Afghanistan, more children are expected to die this winter from starvation than total civilians killed in the past two decades of war.

Each of these crises is vastly different from the others—but the U.S. has responded to all of them with the same political tool: economic sanctions. In the case of Ethiopia, President Joe Biden has threatened to impose sanctions on members of both sides of the conflict, despite doubts about whether doing so would substantially affect either side. With Russia, Biden announced in early December that he was considering additional sanctions against members of Russian President Vladimir Putin’s inner circle, in an attempt to prevent an invasion of Ukraine. And with regard to Afghanistan, the Taliban takeover in mid-August prompted an immediate withdrawal of billions in foreign aid and the implementation of U.S. sanctions against the Taliban government, paralyzing the economy and pushing the country to the brink of collapse. Indeed, as Charli Carpenter wrote in her WPR column last week, there is a case to be made that sanctions by the U.S. and its allies have condemned many millions of Afghans to starvation.

Across the board, imposing sanctions has become an exceedingly common U.S. foreign policy response to acute and chronic repression, violence, corruption and anti-democratic behavior even beyond these prominent emerging crises. Last week, the U.S. imposed sanctions on individuals from Iran, Syria and Uganda for various human rights abuses; this week, it announced sweeping sanctions against Chinese officials, organizations and individuals associated with the potential genocide of Uyghurs and other Turkic minorities in Xinjiang province. That announcement came mere days after the U.S., United Kingdom and Canada imposed an initial round of sanctions on officials and entities in China, Myanmar, North Korea and Bangladesh.

As that last example demonstrates, the expansive use of sanctions is not unique to U.S. foreign policy. On Dec. 8, the European Union announced that it would pursue new measures to allow the European Commission to impose sanctions on behalf of the bloc and its members. The proposal is designed to allow the EU to defend itself against economic coercion from outside actors, including recently by China and by Belarusian President Alexander Lukashenko, who himself is already subject to separate U.S. and EU sanctions. The EU has also signaled its intent to join the U.S and U.K. in imposing strong sanctions on Russia if it engages in aggression against Ukraine.

Given their broad use, it’s worth asking whether these sanctions are functioning as intended.

It is difficult to make broad statements about whether or not sanctions “work,” but many experts nevertheless express doubts about their efficacy. The aim of these measures is to impose economic, reputational and political costs on both the targets and anyone caught working with them. Sanctions certainly do have economic consequences. The loss of access to the U.S. market and banking system has the potential to immediately inflict calamitous economic losses on almost any country in the world, and substantial damage to individuals and corporations.

However, those same economic impacts also worsen humanitarian crises on the ground and impede progress on issues that require worldwide cooperation, such as combating the COVID-19 pandemic. For instance, Iran, North Korea and Venezuela each struggled to contain massive outbreaks of the virus in part because they could not easily obtain adequate food and health supplies—a problem intimately linked to U.S. sanctions.

Of course, sanctions vary widely in terms of their severity, targets and effects. Early sanctions regimes were largely “blanket” sanctions against entire countries. A prominent example is the sanctions regime imposed by the United Nations against Iraq in the 1990s. The policy enforced a near-total ban on trade with Iraq for U.N. members, with few exceptions; for a time, the ban even extended to food shipments, provoking widespread starvation.

The inordinately severe humanitarian consequences famously led the U.N. to launch the disastrous “oil-for-food” program, which allowed Iraq to sell just enough oil to feed its population. It backfired. The program’s implementation was rife with corruption, and Saddam Hussein’s regime even used it to evade sanctions, exploiting the incoming funds to build up the country’s military. In light of this legacy, blanket bans have become increasingly rare in recent years. Nevertheless, broad sanctions regimes are still occasionally implemented, including in Afghanistan today.

These days, most sanctions tend to be narrower, targeting specific corporations, elites or even private organizations. Recent EU sanctions, for example, targeted the Wagner Group, a Russian military contractor whose mercenaries have been accused of committing atrocities around the globe, especially across the African continent and in Ukraine.

The move toward selective targeting is in part an acknowledgement of the profound and devastating effects blanket sanctions have on innocent populations. Indeed, in October, Biden ordered a review of U.S. sanctions policy in an effort to mitigate its unintended consequences—including harm to populations that are already suffering. Washington’s use of sanctions is being reevaluated in many other contexts, too, perhaps most prominently as Biden weighs renegotiating the Iran nuclear deal. All the same, sanctions of all shapes and sizes are continually implemented across a variety of geopolitical contexts.

Even setting aside sanctions’ humanitarian impact, both blanket and targeted sanctions have a history of failing to elicit meaningful policy change from the targeted government, and have commonly prompted backlash and strategic consequences. Earlier this week, Nicaragua reestablished ties with China and severed them with its long-time partner, Taiwan. The decision came in the aftermath of harsh sanctions imposed by the U.S. against Nicaraguan President Daniel Ortega and his aides, after Ortega secured a fourth term amid allegations of electoral fraud and repression of opposition figures.

China has a history of using U.S. sanctions as an opportunity to strengthen its relationships with the targeted countries, providing them with urgently needed economic support. Chinese debt relief is rarely conditioned on recipient countries improving governance or human rights conditions at home—an enticing prospect for regimes struggling under the economic costs of U.S. sanctions. Sanctions regimes, therefore, may actually undermine U.S. influence in the targeted country.

Sanctions may also alter market incentive structures and expand informal and black-market economies in targeted countries. This may serve to increase government corruption by deepening the relationship between these regimes and transnational money laundering and criminal networks. Sanctions can incentivize governments to turn inward, strengthening the relationship between capitalist oligarchs and the public sector. And they can also bear economic costs for U.S. allies; most of the impact of U.S. secondary sanctions on Russia and Iran, for instance, was felt by European businesses. Targeted politicians, meanwhile, may suffer some negative political consequences from sanctions, but studies suggest these consequences are comparatively weak.

Given sanctions’ history of catalyzing widespread human rights violations and famine, potentially increasing corruption in targeted states and jeopardizing U.S. relationships with key partners, why are they so common? Among the U.S. and its allies, implementing sanctions appears almost instinctual. They are often treated as a cheap, infinitely adaptable policy instrument and widely seen as a more publicly palatable response to foreign aggression than military intervention. They are relatively easy to implement and have demonstrable economic effects.

But their unintended consequences and the limited evidence that they influence the targeted regimes’ behavior should give policy officials pause. Sanctions may be easy, but—as Afghanistan’s current catastrophe shows—they are not cheap.