The Great Military Rivalry: China vs the U.S.

A quarter-century ago, China conducted what it called “missile tests” bracketing the island of Taiwan to deter it from a move toward independence by demonstrating that it could cut its ocean lifelines. In response, in a show of superiority that forced China to back down, the U.S. deployed two aircraft carriers to Taiwan’s adjacent waters. Were China to repeat the same missile tests today, it is highly unlikely that the U.S. would respond as it did in 1996. The reason why is that if U.S. carriers moved that close to the Chinese mainland, they could now be sunk by the DF-21 and DF-26 missiles that China has since developed and deployed.

About the military rivalry between China and the United States in this century, our three major findings are these. First, the era of U.S. military primacy is over: dead, buried, and gone— except in the minds of some political leaders and policy analysts who have not examined the hard facts. As former Secretary of Defense General James Mattis put it starkly in his 2018 National Defense Strategy, “For decades the U.S. has enjoyed uncontested or dominant superiority in every operating domain. We could generally deploy our forces when we wanted, assemble them where we wanted, and operate how we wanted.” But that was then.

“Today,” Mattis warned, “every domain is contested—air, land, sea, space, and cyberspace.” As a result, in the past two decades, the United States has been forced to retreat from a strategy based on primacy and dominance to one of deterrence. As President Biden’s National Security Advisor Jake Sullivan and his National Security Council (NSC) colleague Kurt Campbell acknowledged in 2019, “The United States must accept that military primacy will be difficult to restore, given the reach of China’s weapons, and instead focus on deterring China from interfering with its freedom of maneuver and from physically coercing U.S. allies and partners.” One of the architects of the Trump Administration’s 2018 National Defense Strategy put it less diplomatically and more succinctly: “The era of untrammeled U.S. military superiority is over.”

Second, while America’s position as a global military superpower remains unique—with power projection capabilities no one can match, more than 50 allies bound by collective defense arrangements, and a network of bases on almost every continent—both China and Russia are now serious military rivals and even peers in particular domains. Russia’s nuclear arsenal has long been recognized as essentially equivalent to America’s, and, while China’s nuclear arsenal is much smaller, Beijing has nonetheless deployed a fleet of survivable nuclear forces sufficient to ensure mutually assured destruction (MAD). The Defense Department’s designation of China and Russia as “great power competitors” recognizes that they now have the power to deny U.S. dominance along their borders and in adjacent seas.

Third, if in the near future there is a “limited war” over Taiwan or along China’s periphery, the U.S. would likely lose—or have to choose between losing and stepping up the escalation ladder to a wider war. Deputy Secretary of Defense Kathleen Hicks and her fellow members of the National Defense Strategy Commission provided a vivid scenario of a war over Taiwan that the U.S. could lose. If in response to a provocative move by Taiwan, or in a moment of hubris, China were to launch a military attack to take control of Taiwan, it would likely succeed before the U.S. military could move enough assets into the region to matter. If the U.S. attempted to come to the defense of Taiwan with the forces now in the area or that could arrive during the Chinese assault, they would not be able to materially affect the outcome. As former Vice Chairman of the Joint Chiefs of Staff Admiral James Winnefeld and former CIA Acting Director Michael Morell wrote last year, China has the capability to deliver a fait accompli to Taiwan before Washington would be able to decide how to respond. The National Defense Strategy Commission reached a similar conclusion: the United States “might struggle to win, or perhaps lose, a war against China.”

Beyond these findings, we begin with three further bottom lines up front:

Given the secrecy that surrounds some aspects of this topic, the clamor of claims by advocates seeking to persuade Congress to fund their budgets, and a press that tends to hype the China threat, it is often difficult to assess the realities. Thus, for example, this Report does not include a discussion of the China-U.S. cyber rivalry because we concluded that so many of the public claims are misleading. Nonetheless, by focusing on the hard facts that are publicly available about most of the races, and listening carefully to the best expert judgments about them, it is clear that in the military rivalry with China, the U.S. has entered a grave new world.

Should recognition of ugly military realities in this new world be cause for alarm? Yes. But the path between realistic recognition of the facts, on the one hand, and alarmist hype, on the other, is narrow. Moreover, in the current climate, with American political dynamics fueling increasing hostility toward China, some have argued that talking publicly about such inconvenient truths could reveal secrets or even encourage an adversary. But as former U.S. military and civilian Defense Department leaders have observed, China’s leaders are more aware of these brute facts than are most members of the American political class and policy community. Members of Congress, political leaders, and thought leaders have not kept up with the pace of change and continue repeating claims that may have made sense in a period of American primacy but which are dangerously unrealistic today. As a number of retired senior military officers have said pointedly, ignorance of military realities has been a source of many civilians’ enthusiasm for sending U.S. troops into recent winless wars. 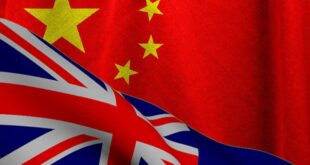 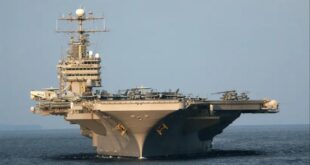 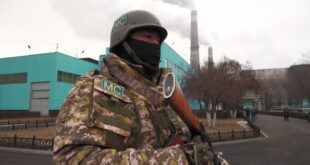 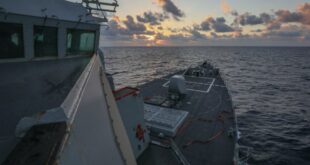 Barbs Traded After US Warship Sails In China-Claimed Territorial Sea