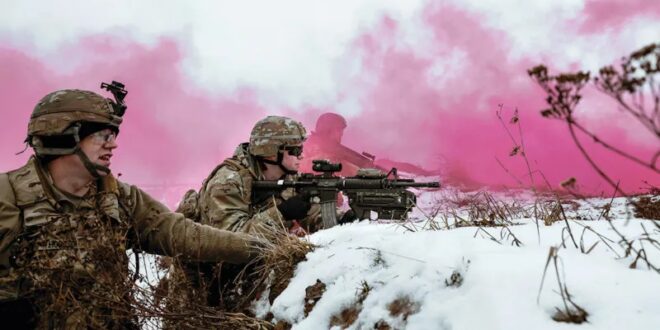 Poland’s defense budget, currently over two percent of the country’s GDP, is apparently set to grow further. In October 2021, Polish Deputy Prime Minister Jarosław Kaczyński announced that his government intended to raise defense spending to “significantly higher” levels. Its headline aim was to double the strength of Poland’s armed forces to 250,000 personnel and expand the ranks of its Territorial Defense Force (Wojska Obrony Terytorialnej or WOT) to 50,000. But little of that was actually new. Most of those troop increases had already been outlined in Poland’s Armed Forces Development Program that was released in 2018.[1]

More noteworthy is Poland’s intention to accelerate the modernization of its military hardware. Indeed, the Polish military has long recognized its need to replace the 30- to 40-year-old combat systems that make up much of its equipment. That is particularly true of the Polish army and air force, which still operate Soviet-era T-72 and PT-91 (a T-72 variant) main battle tanks (MBT) and MiG-29 and Su-22 aircraft. Hence, in 2012, Polish defense planners laid out a structured roadmap for their country’s military procurement programs in the Armed Forces Technical Modernization Plan (Plan Modernizacji Technicznej or PMT). Since then, the plan has made some good, but uneven progress in acquiring new equipment. Broadly speaking, the PMT’s programs for the Polish air force have fared better than those for its army and navy.

Among Poland’s armed forces, the army has grown the most in terms of personnel, boosting its strength by a third over the last half-decade. It recently reached a major milestone when its force structure expanded from three to four divisions after its new 18th Mechanized Division became operational in June 2021. The division is one of several formations that Poland plans to array on its northern border with Russia’s Kaliningrad Oblast and eastern border with Russia’s ally, Belarus. But to contend with Russian forces stationed there, those Polish formations need hundreds of additional modern armored vehicles, particularly MBTs.

Unfortunately for the Polish army, it has been slow to acquire them. In fact, Poland took five years to just upgrade its 142 Leopard 2A4 MBTs to the newer Leopard 2PL standard and has not added any new Leopard 2A5 MBTs to its inventory of 105 since 2015. Perhaps impatient with that tepid pace, Warsaw decided to procure 250 American M1A2 MBTs in July 2021. And though it came as little surprise that the army intends to assign the new tanks to the 18th Mechanized Division, it was interesting that the purchase occurred outside of the normal defense budget and was not part of the PMT.[2]

Beyond its tanks, the Polish army must replace many other obsolete pieces of equipment, including roughly 1,200 BMP-1 infantry fighting vehicles and 300 BRDM-2 reconnaissance vehicles, not to mention artillery, bridging equipment, and various munitions. While a few dozen new Krab 155-mm self-propelled howitzers and Rak 120-mm self-propelled mortar systems have reached Polish army units, far more is needed—especially considering the fact that outfitting the WOT’s 17 new light infantry brigades will surely add to Poland’s military procurement burden, if those brigades are to become fully operational, as planned, by 2025.

With its fleet rapidly aging, the Polish navy also needs to hasten its PMT programs—the most important of which is undoubtedly its Orka program, which envisages the acquisition of three attack submarines. That program has been repeatedly delayed and only reached its analytical-conceptual stage in 2020, even as the navy was about to retire the last of its Type 207 diesel-electric attack submarines. Hence, there has been speculation that Poland might procure two former Swedish navy Södermanland-class diesel-electric attack submarines to fill the gap until the Orka program moves forward. Doing so would surely allow the Polish navy to gain experience with the submarines’ air-independent propulsion system, a critical technology that the navy wants in its future submarines. But doing so also suggests that the Orka program remains far from completion.

Fortunately for the navy, its Miecznik program, which seeks to procure three guided-missile frigates, recently gained some traction. In July 2021, Warsaw selected a consortium led by the Polish Armaments Group (Polska Grupa Zbrojeniowa) to be the shipbuilder for those frigates. Then in December 2021, the government announced that it had begun to review designs for the frigates and would begin construction on them in 2022. But until the frigates are commissioned, the Polish navy’s best sea denial capability may rest ashore in its two coastal defense batteries that were acquired in 2015. The batteries currently cover Poland’s central coastline with their 48 Norwegian Kongsberg Naval Strike Missiles.

Like its navy counterpart, the Polish air force found itself in a tough spot. Despite Russia’s increased air activity in the nearby Baltic region, the number of Poland’s operational combat aircraft declined from 128 to 98 through the 2010s. But fortunately for the air force, its two biggest PMT programs have shown tangible progress. Indeed, the air force might have turned a corner with Warsaw’s long-awaited $4.6-billion agreement to procure 32 American F-35A Joint Strike Fighter aircraft in 2020. After the first F-35As are delivered in 2024, Poland might even extend their capabilities by purchasing unmanned aerial vehicles (UAV) to act as loyal wingmen for the fighters in the future.

Meanwhile, Warsaw decided to buy two batteries of American MIM-104 Patriot air and missile defense systems to revitalize its ground-based air defenses under the PMT’s Wisła program. However, the acquisition took a long time to come to full fruition. The Polish air force’s initial desire to have the batteries configured with the latest command and radar systems delayed the program for years and drove up costs. Poland eventually closed the $4.8-billion deal in 2018, after it chose a less-ambitious command system and the Patriot’s manufacturer agreed to locally build its missile launchers. The first Patriot missile battery is expected to be delivered in 2022.

More recently, Poland’s desire to accelerate its arms procurement could be seen in other PMT programs for the air force. One in particular was the Gryf program which sought to acquire medium-range UAVs. In late 2020, the program reportedly just entered its analytical-conceptual phase. Hence, it seemed that a procurement decision was not imminent. But in May 2021, Warsaw suddenly announced its purchase of 24 Turkish medium-range TB2 UAVs for the program. That purchase, like Poland’s M1A2 purchase two months later, was made without a tender.
Faster (and Looser)

There is no question that Poland wants to build a larger, more modern military as fast as it can. The PMT was supposed to have facilitated that by setting consistent military procurement processes. But Polish leaders have been all too willing to circumvent such processes. Indeed, that is apparently what happened to Poland’s utility helicopter program in the mid-2010s. Successive Polish governments interjected themselves into the program’s selection process—first to pick a winning bidder, and then to unpick it—without considerable attention to the program’s technical requirements. The net result was not only programmatic confusion, but also a decade-long delay before Poland can replace its Soviet-era Mi-2 and Mi-8/17 utility helicopters.

Moreover, Polish leaders have, at times, skirted the PMT’s procurement processes altogether, like in their recent acquisition of M1A2 MBTs. Unfortunately, that can cause other problems. While the tanks themselves are undoubtedly first-rate, their introduction into the Polish army means the army will simultaneously operate three very different tank families: the American M1A2, the German Leopard 2PL/2A5, and the Soviet T-72/PT-91. Their differences in size, weight, and mechanics mean that each tank family may need its own armored recovery vehicles, bridging equipment, and supply chains. All of which have consequences: raising the Polish army’s maintenance costs in peacetime and reducing its interoperability and mobility in combat.

So far, Poland has generally been more successful at expanding its armed forces than outfitting them. Certainly, many of the PMT’s programs have proceeded slower than Polish leaders would like. If they are to get the most out of their military investments, they should find ways to make the PMT work better rather than work around it. By doing so, Warsaw can be more confident that the new money it is funneling into defense will be well spent.

Post Views: 102
Previous Russian Troop Strength In North Caucasus Still Comparable To That At Peak Of Russo-Circassian War
Next Iran’s Regional Diplomatic Push: Is A Breakthrough With Riyadh Possible? – Analysis