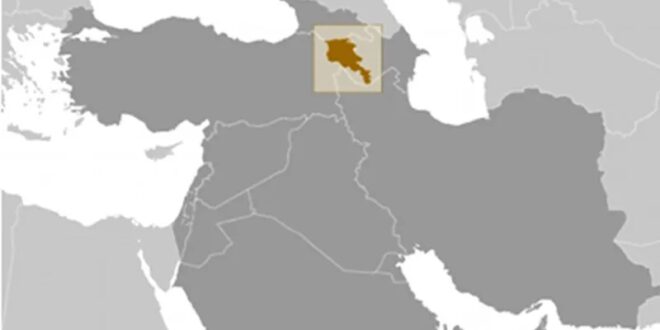 When the USSR disintegrated in December 1991, Turkey recognised Armenia, but they never went on to establish official diplomatic ties. The reasons for this were Turkish diplomatic (but not military) support for Azerbaijan in the First Karabakh War from 1988-1994. Former foreign policy advisor Gerard Libaridian said that in 1992-1993, Iran, Greece and Russia all opposed rapprochement with Armenia.

Armenia’s victory in the First Karabakh War war led to its occupation of a fifth of Azerbaijani territory until 2020. Throughout this period Armenians opposed reconciliation with Turkey. Dashnaks, the country’s largest political force, who dominate the Armenian diaspora, have always been virulently opposed to reconciliation with Turkey and have harboured territorial claims against eastern Turkey.

Nearly three decades on the situation is different. Armenia was defeated in the Second Karabakh War and had to withdraw from Azerbaijani territories. A small enclave remains in Karabakh centred on Stepanakert which is supposedly protected by a Russian “peacekeeping” force. Armenia continues to demand “self-determination” for “Artsakh” while Baku rejects granting it autonomous status. Since February 1988, the Armenian nationalist demand for miatsum, the unification of Nagorno-Karabakh with Armenia, has been presented as an act of self-determination when in fact it represents territorial irredentism.

The extent of the depth of these irredentist feelings were found in a survey conducted on the eve of the Second Karabakh War. The survey found the Armenian vision of “Nagorno Karabakh” to be far larger than that of the Soviet era Nagorno Karabakh Autonomous Oblast (NKAO) which existed within Azerbaijan from 1923-1991. When asked in the survey how they understood “Nagorno Karabakh” only 15% associated it with the NKAO while a whopping 84% defined it as all lands which held Armenian Churches (i.e., greater Armenia).

Perhaps the way to explain how reconciliation is easier with Turkey than with Azerbaijan is the factor of time. Armenians populated eastern Turkey a century ago and many of those descendants are long living in the diaspora while many (or most?) of the Churches that had existed there are long destroyed. Meanwhile, east of Armenia there are still Churches, and the memory of living there is fresher in the minds of the current generation.

Armenian Prime Minister Nikol Pashinyan is negotiating with Azerbaijan from a position of weakness because of the country’s defeat. In addition, Pashinyan is finding it impossible to pursue reconciliation with Azerbaijan through a peace treaty because of strong domestic opposition from the Ministry of Foreign Affairs, where the Dashnyak-dominated diaspora is highly influential, and the Ministry of Defence, which is under strong Russian influence. Much of Armenia’s civil society and political parties are critical of Pashinyan, seeing him as weak in defending the country’s national security and critical of his timid responses to Azerbaijani border provocations.

This is coupled with widespread public trauma from the defeat. As Farid Shafiyev wrote, “the main challenge is not the status of Armenians in Nagorno- Karabakh, but the lack of will of Armenians to live with Azerbaijanis—either in Azerbaijan or even in Armenia.”

And this leads to the next obstacle – Russia’s so-called “peacekeepers”. CIS (in reality, Russian) “peacekeepers” have a very poor record in Moldova’s Transniestr and Georgia’s Abkhazia and South Ossetia where they have been biased, sided separatists and have never sought to resolve the conflicts. The Kremlin views Georgia’s two frozen conflicts and the war in the Donbas region of eastern Ukraine to prevent both countries joining NATO and the EU.

Russia has the means to pressure Armenia to sign a peace treaty recognising Soviet internal boundaries as post-Soviet international frontiers; after all, Armenia is – like Belarus – a Russian satellite state. This was clearly seen when Armenian forces joined Belarus in the Russian-led “peacekeeping” force in Kazakhstan under the fig leaf of the Collective Security Treaty Organisation (everybody had seemingly forgotten Armenia was a founding member of the CSTO).

Armenia’s economy – like that of Belarus – is also completely dependent on Russia in terms of trade and remittances from migrant workers. There are 2.5 million Armenians living in Russia which is only slightly less than the 3 million population of Armenia. Large numbers of Armenians continue to leave the country with a spike in numbers after defeat in the Second Karabakh War. Russia tacitly encourages Armenia to continue to insist on the “self-determination” of Nagorno-Karabakh because it leads to Armenia’s continued isolation and lack of an independent foreign and economic policy.

The Kremlin’s multi-vector strategy reflects current Russian geopolitics in the South Caucasus. It is no coincidence that Turkish-Armenian talks will be held in Moscow, with the first round beginning on 14 June. “We expect that as a result of the process, diplomatic relations will be established between Armenia and Turkey and the border between the two countries, which was unilaterally closed by Turkey in the early 1990s, will be opened,” the Armenian Foreign Ministry spokesman Vahan Hunanian said.

On 26 November 2021, the presidents of Azerbaijan, Armenia, and Russia, met in Sochi and signed a new statement on the delimitation and demarcation of state borders, strengthening of regional communications, and restoration of peace and trust between the Armenian and Azerbaijani people. This, like thousands of other documents signed within the CIS since 1991, is unlikely to be implemented. Not mentioned at the summit was the final status of Karabakh, which Russia sees as a separate question to a border agreement, and the irrelevance of the OSCE Minsk Group. The US has been absent from the South Caucasus for over a decade while France has been discredited as an impartial co-chair of the OSCE Minsk peace process because of its open pro-Armenian bias. The Minsk process itself has been superseded by military developments on the ground and, as Vasif Huseynov writes, should be reformed or disbanded.

Three sticking points are Azerbaijan’s insistence on control over the Lachin corridor linking Armenia with Karabakh; the Zangezur (Syunik) corridor between Azerbaijan and Nakichevan which Armenia demands be not called a “corridor” and Armenia’s acceptance of Azerbaijani sovereignty over Karabakh and demilitarisation of Armenian forces in Stepanakert. Armenia continues, with the connivance of Russian “peacekeepers,” to resupply and rotate its forces in Karabakh from Armenia using the Lachin corridor. Baku has protested Russian “peacekeeping forces” providing “basic training” for Armenians living in Stepanakert. Delimitation, based on maps from the former USSR, will be followed by demarcation which, as we know from other former Soviet republics will take time. Turkey is a dissident member of NATO and President Recep Tayyip Erdogan plays off the West against Russia. Turkey is not pro-Russian as it, for example, ignores Russian protests when it sells drones to Ukraine; in fact, Turkey and Russia are best described as “frenemies.” Israel, which nobody accuses of being pro-Russian, does not sell drones to Ukraine because it does not want to have poor relations with Russia which is militarily supporting Assad in Syria. Nevertheless, the Soviet and Russian Kremlin have always supported promoting divisions in NATO and the EU and the Kremlin sees Turkey as a useful tool towards this goal.

The Kremlin has no interest in Armenia’s reconciliation with Azerbaijan as this would end the rationale for it to base “peacekeepers” in the South Caucasus. If Armenia and Azerbaijan signed a peace treaty that recognised the Soviet internal boundary as their border and Armenian enclave in Stepanakert accepted Azerbaijani sovereignty, Yerevan and Baku would have no need to renew Russia’s “peacekeeping” mandate in three years’ time. That Russia is disinterested in this kind of resolution of the Armenian-Azerbaijani conflict was revealed by Russian Foreign Minister Sergei Lavrov who said the delimitation of the Armenian-Azerbaijani border “does not apply to Karabakh and the problems of the region.” In other words, the Kremlin is saying go ahead and sort your border dispute out but because this does not apply to Karabakh our “peacekeepers” will be staying indefinitely. Lavrov re-affirmed what Russian President Vladimir Putin said in November 2002 that “Karabakh’s final status has not yet been settled. We agreed that the status quo will be maintained and what happens next will be determined by future leaders, future participants in this process.” Not surprisingly therefore, Karabakh was not raised at the Sochi meeting last November.

Lavrov’s statement will be music to the ears of Armenian opponents of the 2020 ceasefire agreement because it means the Armenian enclave in Stepanakert can continue to remain as the frozen conflict “Artsakh Republic.” This will not though be acceptable to Baku because it has always stated Karabakh, including Stepanakert, are part of its sovereign territory where the Azerbaijani constitution and laws should apply. The 2020 ceasefire agreement called for the withdrawal of “Armenian troops” which should have withdrawn during the deployment of Russian “peacekeepers.” With Russia continuing to protect the Stepanakert “Republic of Artsakh” it is being allowed to continue to pretend it has a functioning government with its own law enforcement forces.

The Kremlin’s playbook is not unique to the South Caucasus. Russia seeks a “peace agreement” in the Donbas region of eastern Ukraine whereby the 35,000-strong proxy forces it has weaponised would become a local security force in an autonomous Donbas. Ukraine and Azerbaijan would not agree to a Kremlin playbook that creates Russian Trojan horses inside their territories.

Reconciliation between Armenia and its Turkish and Azerbaijani neighbours would benefit all three countries. For Armenia it would dramatically improve its dire economic situation, reduce the outflow of migrants, and reduce its dependency on Russia. It is therefore little wonder Russia is opposed to reconciliation between Armenia and Azerbaijan and uses its so-called “peacekeeping forces” to indefinitely drag out a resolution of Karabakh – just as it has done in Georgia and Moldova and is attempting to do so in Ukraine.