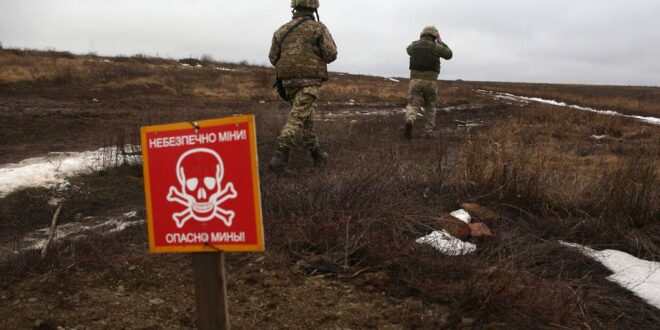 Officials in Berlin have rejected a renewed request by Ukraine for lethal, defensive equipment in the face of Russia’s massive troop buildup, effectively testing the restrictive arms-export policy enshrined in the government’s coalition agreement.

Ukraine’s ambassador to Germany, Andriy Melnyk, told German press agency DPA on Wednesday his country is seeking warships to help defend its Black Sea and the Sea of Asov coasts in the event of a Russian invasion. Germany’s ships, he was quoted as saying, “are among the best in the world.”

But a government spokesman reiterated Germany’s unwillingness the same day, noting how Chancellor Olaf Scholz and Foreign Minister Annalena Baerbock had rejected similar asks earlier this week, local media reported. During a visit to Kyiv, Baerbock cited historical reasons as playing a role in Germany’s position, a reference to the Nazi regime’s atrocities against the Soviet Union during World War II.

Ukraine and the West worry another Russian move into Ukraine is imminent, following Moscow’s 2014 annexation of Crimea and ongoing fighting in the country’s east since then. Diplomacy so far has failed to calm tensions, with NATO pushing back against Russia’s demand that Ukraine never be admitted into the alliance.

That leaves the military option of supporting Ukraine with weapons in hopes of deterring a Russian invasion or, if that fails, making the fighting costly enough for Russia to reconsider. Earlier this week, for example, the British sent short-range, anti-tank weapons with that calculus in mind. The U.S. government also has a $200 million package of defensive military aid pending, the Associated Press reported.

The Russian government has said there are no plans to invade Ukraine, describing its massive troop buildup on the border as a “sovereign right.”

Germany’s new government has made overhauling its arms-export policies to be more restrained an explicit objective of its defense agenda, including on a European Union level. Resistance is forming within the coalition ranks, however, in the case of Ukraine, with some politicians arguing the prospect of preventing a war there should factor into the decision.

A new Ukrainian military assessment sees preparations for war continuing on the Russian side, Military Times reported, citing the positioning of medium-range Iskander missiles near the border, some within striking distance of Kyiv.

Post Views: 84
Previous Russia and Iran Put on a Show of Unity — Against the U.S.
Next New DARPA research could make night vision goggles smaller