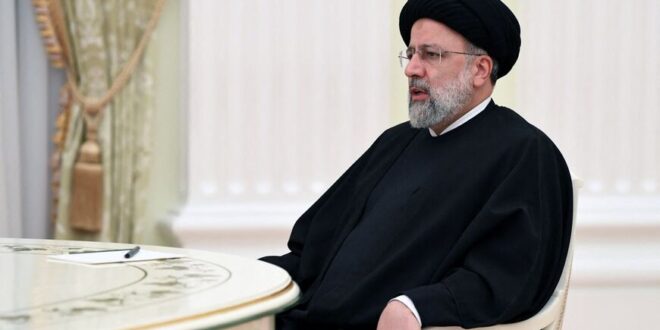 The Iranian president addressed Russian lawmakers on the second day of his visit to Moscow, a “landmark” trip at a critical juncture for the revival of the Iran nuclear deal.

Iran’s President Ebrahim Raisi defended his country’s nuclear activities as legal and renewed strong criticism against the American sanctions regime that has battered the Iranian economy.

“We are not seeking a nuclear bomb, and it has no place in our defense strategy,” Raisi declared in a speech at Russia’s lower parliament Jan. 20, as he refenced a 2003 fatwa, or religious decree, issued by Supreme Leader Ayatollah Ali Khamenei in prohibition of atomic weapons.

While expressing readiness for “maximum engagement” with the world, Raisi vowed “not to back off” in his fight against the US, which “seeks to violate our nation’s rights.” The Iranian president announced his government is serious about reviving the 2015 nuclear deal, but only “if the other parties are also serious for a genuine and effective relief of sanctions.”

Raisi’s latest stance on Iran’s nuclear program was made as an eighth round of talks on resurrecting the accord was underway in Vienna with reported slow progress.

The United States, which is indirectly engaged in the talks, has warned that the clock is ticking on a new deal, and failure will make Washington choose from among other options.

The Iranian president was in Moscow as part of a two-day visit that earlier took him to a socially distanced meeting with his Russian counterpart Vladimir Putin at the Kremlin.

The “landmark” visit, as hailed by the Islamic Republic and its media, fell within the “look to east” policy promoted by the country’s supreme leader, a strategy that prioritizes ties with China and Russia over Western powers.

Raisi told a meeting of Iranian economic actors in Moscow on Thursday that preliminary work has already started on drafting a 20-year Iran-Russia partnership deal, but provided no further details. The two sides have also agreed on opening a $5 billion credit line, which Tehran badly needs following years-long and crippling international banking restrictions.

Despite the applause from government loyalists, Raisi’s Russia trip has also fueled worries among his critics that Tehran could cede too much to Moscow. They have specifically highlighted the potential 20-year accord, which remains largely shrouded in secrecy.

The hard-line paper Kayhan — close to Khamenei’s office — threw a signature diatribe at those critics, describing them as “stooges of America.”

“It is understandable that the US would not enjoy Iran’s affinity with Russia and China … because when powers like China, Russia and Iran stand together, it would not benefit the West,” the paper wrote. “But the Reformists [at home] need to answer why they are moving against Iran’s national interests and stay aligned with those of the United States.”

In the wake of the Raisi visit, some Reformists have dug into the history of Iran and Russia ties, highlighting the latter’s “backstabbing.” They have also questioned the Islamic Republic’s failure to comply with its original revolutionary conviction of strict independence, famously embodied in the motto of “no to east, no to west.”

“The sign ‘neither east, nor west’ on the entrance of the Foreign Ministry premises has become irrelevant long ago,” tweeted political scientist and outspoken critic Sadegh Zibakalm. “When back from Moscow, the foreign minister would better take the sign down and send it to the basement storage in Kayhan [newspaper’s building].”