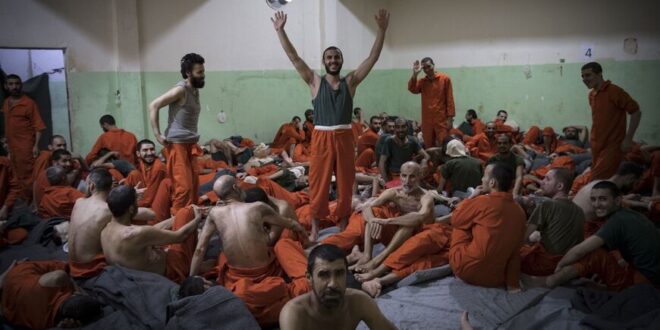 Detention facilities under US-backed Kurdish-led Syrian Democratic Forces were hit by a major attack attempting to free the thousands within.

Mosque loudspeakers urged residents of Hasakah to stay inside in the early morning hours of Jan. 21 after an attempted jailbreak at detention facilities housing thousands of Syrian and Iraqi men suspected of being in the Islamic State.

The attack started around 10:30 PM on Thursday and the situation was still not under control as of late the next morning. Locals reported civilians fleeing from nearby areas due to clashes between IS fighters and the SDF.

This journalist was sent a cellphone video allegedly from inside the prison walls Friday morning showing men under a grey sky yelling “Allahu Akbar” and shooting machine guns.

The attack on the prison reportedly involved the detonation of both a car bomb and a motorcycle loaded with explosives near the prison, followed by clashes with security forces at the perimeter of the prison as well as an attack on a fuel depot nearby, where they were said to have “blown up three tankers in an attempt to take advantage of the rising smoke to prevent aircraft from following their movements.”

At the same time, rioting was reported in the prison. Initial reports from media outlets close to the SDF of between “15 and 20” prisoners having escaped were later retracted for unclear reasons.

Some locals claimed that “dozens” of suspected IS affiliates had escaped.

Coalition aircraft meanwhile carried out at least one but possibly more strikes against targets near the prison, located in the Gweiran neighbor in the western part of the city in northeastern Syria. The city is one of the 10 largest in Syria and has a mixed Kurdish and Arab population.

“In defense of the SDF, coalition aerial assets quickly began supporting operations to stabilize the situation through a coordinated strike against the hostile forces,” read a coalition statement sent in the early morning hours of Friday after a request for information. “According to coalition forces, SDF casualties ensued during the attack.”

It was not immediately apparent whether and how many of those detained had actually escaped.

Due to it being an ongoing situation, “it will take time to sort out” this question, a source close to the ongoing operations said Friday morning.

It will likely prove equally as difficult to understand who those men were, given the uncontrolled nature of the facilities themselves.

As Al-Monitor reported in November after a plan to attack the same prison had been thwarted, these facilities hold “several thousand IS operatives and is known to only occasionally be subjected to sweep-up operations by the Kurdish-led Syrian Democratic Forces. The SDF has repeatedly lamented a lack of funding and personnel to do more than simply allow the prisoners to effectively run their own affairs within the prison.”

Language difficulties abound in the area, with several Kurdish dialects and Kurdish fighters from foreign countries including Iran and Turkey who do not understand Arabic but who are operating on the ground in northeastern Syria, creating friction with the local Syrian Arab population.

Even for those who do speak Arabic, dialectal differences can make things complicated. One Syrian this journalist knows originally from Deir ez-Zor initially had his asylum request rejected in Germany because interviewers had claimed that his accent was Iraqi. He later provided proof that he was actually from Deir ez-Zor.

A number of fighters from the Kurdistan Workers Party (PKK) — most of whom have Turkish nationality — have been killed in the area by Turkish airstrikes in recent years, including a PKK leader killed on a road near Hasakah.

Sources have been claiming as far back as 2019 that SDF commanders in some Arab areas were foreigners who did not speak Arabic at all.

Many of the IS detainees were arrested in the operation to retake the last territory held by IS in Syria, which ended in March 2019, or before. It is still unclear who many of those men are. Syrian sources from Deir ez-Zor have claimed in recent months that there are key IS affiliates and former commanders among them.

Iraq has been repatriating some of its nationals among them over the past year to investigate and put them on trial. The most recent batch of 50 IS suspects arrived on Jan. 8.

On Jan. 17, only a few days prior to the latest attack, this journalist had reported that the man the SDF arrested for the previous attack was known by locals not to have been the main person behind them and that festering security concerns about potential breakouts from this prison were not being properly addressed.

Syrian sources had claimed in recent weeks that the IS cells that had been prepped for the planned attack in November were still in the city and that local security forces were aware of their presence but that they were presumably waiting to gather more information before taking action.

Anger over the SDF’s longstanding discriminatory treatment of the Arab population, with alleged arbitrary arrests, conflicts over resources, corruption, forced conscription and the resulting further impoverishment of the local Arab community — already suffering from over a decade of war and many years under IS occupation alongside a major massacre by IS against a tribe that attempted to rise up against the group — continue to create a lack of the trust on the ground needed for local Arabs to cooperate fully with the Kurdish-led forces.

Such cooperation would be essential in situations such as the present one if a number of detainees have actually escaped.

Protests have been held for years by the local Arab population in SDF-held areas, as this journalist reported in 2019 and 2020 from eastern Deir ez-Zor province, where the population is almost entirely Arab, but little progress has been made.

There is also concern that any prison escapees may attempt to cross into Iraqi territory.

Unofficial border crossings not far from the Iraqi city of Sinjar are “roughly 90 kilometers [56 miles] away but it takes three hours of driving, usually due to the dirt roads,” a Syrian who has used that route told Al-Monitor.

Fighters affiliated with the PKK have long used this route to get to the Sinjar area but so have men wanted by the authorities on both sides of the border for IS affiliation.