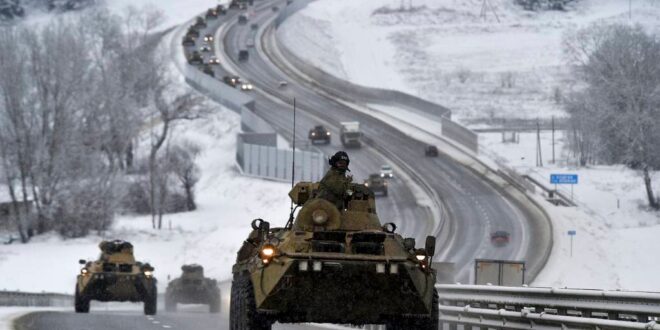 President Joe Biden is not planning to answer a further Russian invasion of Ukraine by sending combat troops. But he could pursue a range of less dramatic yet still risky military options, including supporting a post-invasion Ukrainian resistance.

The rationale for not directly joining a Russia-Ukraine war is simple. The United States has no treaty obligation to Ukraine, and war with Russia would be an enormous gamble, given its potential for expanding in Europe, destabilizing the region, and escalating to the frightening point of risking a nuclear exchange.

Doing too little has its risks, too. It might suggest an acquiescence to future Russian moves against other countries in eastern Europe, such as the Baltic states of Estonia, Latvia and Lithuania, although as NATO members those three have security assurances from the United States and the rest of the alliance.

Secretary of State Antony Blinken, who is in Europe this week to speak with officials in Ukraine, consult NATO allies and then meet Friday with his Russian counterpart, has asserted “an unshakable U.S. commitment to Ukraine’s sovereignty and territorial integrity.” But he has not publicly defined the limits of that commitment.

How far, then, might the United States and its allies go to help Ukraine defend itself if the buildup of Russian forces along Ukraine’s borders leads to an invasion?

Why not contest a Russian invasion?

Going to war against Russia in Ukraine could tie up U.S. forces and resources for years and take a heavy toll in lives with an uncertain outcome at a time when the Biden administration is trying to focus on China as the chief security threat.

On Wednesday, Biden said it was his “guess” that Russian President Vladimir Putin will end up sending forces into Ukraine, although he also said he doesn’t think Putin wants all-out war. Biden did not address the possibility of putting U.S. ground troops in Ukraine to stop an invasion, but he previously had ruled that out.

Biden said he is uncertain how Putin will use the forces he has assembled near Ukraine’s border, but the United States and NATO have rejected what Moscow calls its main demand — a guarantee that the Western alliance will not expand further eastward. Russia annexed the Crimean Peninsula from Ukraine in 2014 after the ouster of Ukraine’s Moscow-friendly leader and also intervened in eastern Ukraine that year to support a separatist insurgency. More than 14,000 people have been killed in nearly eight years of fighting there.

The stakes in Ukraine are high — militarily and politically. Lawmakers have intensified their criticism of Biden’s approach to Putin. Sen. James Inhofe of Oklahoma, the ranking Republican on the Senate Armed Services Committee, accused Biden of “handwringing and appeasement,” but he has not urged sending combat troops. Rep. Jim Himes, a Connecticut Democrat who sits on the House Intelligence Committee, called for an urgent “nonstop airlift” of military equipment and trainers into Ukraine.

Philip Breedlove, a retired Air Force general who served as the top NATO commander in Europe from 2013 to 2016, said in an interview he does not expect or recommend that the United States send combat troops into Ukraine. Instead, Washington and its allies should be looking for ways to help Ukraine defend its own airspace and territorial waters, where it faces overwhelming Russian superiority, he said.

“Those are things we should be considering as an alliance and as a nation,” he said. “If Mr. Putin is allowed to invade Ukraine and there were to be little or no consequence, we will see more of the same.”

What are Biden’s other options?

Given its clear military inferiority, Ukraine could not prevent Russian forces from invading. But with help from the United States and others, Ukraine might deter Putin from acting if he were convinced that the costs would be too high.

“The key to thwarting Russian ambitions is to prevent Moscow from having a quick victory and to raise the economic, political, and military costs by imposing economic sanctions, ensuring political isolation from the West, and raising the prospect of a prolonged insurgency that grinds away the Russian military,” Seth Jones, a political scientist, and Philip Wasielewski, a former CIA paramilitary officer, wrote in a Jan. 13 analysis for the Center for Strategic and International Studies.

The Biden administration has suggested it is thinking along similar lines.

How is the US supporting Ukraine’s military now?

Pentagon press secretary John Kirby says there are about 200 National Guard soldiers in Ukraine to train and advise local forces, and on Tuesday he said there are no plans to augment their number. There also are an undisclosed number of U.S. special operations troops providing training in Ukraine. Kirby wouldn’t say whether the U.S. soldiers would pull out in the event of a Russian invasion, but he said the Pentagon would “make all the appropriate and proper decisions to make sure our people are safe in any event.”

The administration said Wednesday it is providing a further $200 million in defensive military aid to Ukraine. Since 2014 the United States has provided Ukraine with about $2.5 billion in defense assistance, including anti-tank missiles and radars.

How might the US help Ukraine after an invasion?

It’s not clear. National security adviser Jake Sullivan said last week that the U.S. would “dramatically ramp up” support for Ukraine’s “territorial integrity and sovereignty.” But he did not spell out how that might be done.

The administration says it also is open to sending military reinforcements to NATO allies on the eastern front who want American reassurance.

Jones and Wasielewski say that in addition to implementing severe sanctions against Russia in the event of an invasion, the United States should provide Ukraine with a broad range of military assistance at no cost. This would include air defense, anti-tank and anti-ship systems; electronic warfare and cyber defense systems; small arms and artillery ammunition, and other items.

“The United States and NATO should be prepared to offer long-term support to Ukraine’s resistance no matter what form it ends up taking,” they wrote. This aid could be delivered overtly with the help of U.S. troops, including special operations forces, or it could be a CIA-led covert action authorized by President Biden, they added.

That would carry the risk of putting U.S. personnel in the line of fire — and drawing the United States into the very combat it’s determined to avoid.

Post Views: 98
Previous NATO should shut the door, but not because Russia said so
Next EU agency seeks clearer rules on balancing borders, rights