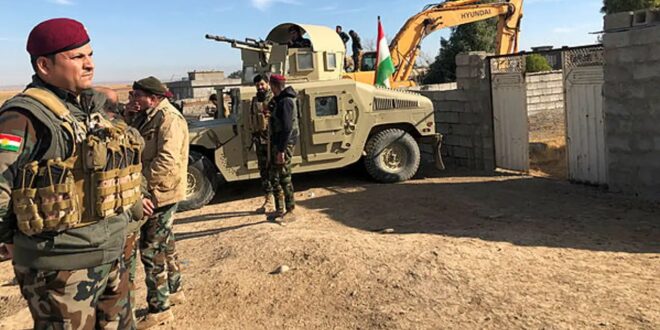 Though little has remained of the Islamic State, which once ruled a third of both Syria and Iraq, two major offensives that left scores dead put forces in both countries on high alert

Kurdish-led Syrian Democratic Forces (SDF) troops aided by U.S. troops tightened their siege of a prison housing Islamic State suspects after inmates took over the facility, residents and officials said on Sunday, in what local officials described as one of the Islamist group’s most serious attacks in months.

Across the border in Iraq, authorities have announced a massive military operation targeting remaining ISIS hideouts, after gunmen killed 11 soldiers north of Baghdad – similarly, the deadliest attack in months on Iraq’s military.

The bold assaults suggest ISIS militants have been revitalized after maintaining a low-level insurgency in Iraq and Syria over the past few years, prompting alert among the Iraqi and Syrian militaries, as well as Kurdish and other local forces fighting the group.

The group’s territorial control in Iraq and Syria was crushed by a years-long U.S.-backed campaign, but its fighters continued with sleeper cells that have increasingly killed scores of Iraqis and Syrians in past months.

ISIS fighters stormed the barracks in Iraq’s mountainous al-Azim district outside the town of Baqouba at around 3 A.M. on Friday, according to security officials, while the soldiers inside were sleeping. The killed a guard, shot dead other soldiers and fled.
Iraqi Prime Minister Mustafa al-Kadhimi vowed the attack on the barracks “will not go without decisive punishment,” saying the Iraqi military had to duty “to prevent the repeat of these violations and to hunt down the terrorists.”

At least 70 inmates were killed in the attack on the prison in northeastern Syria, which began on Thursday. Militants detonated a car bomb near the prison gates, helping dozens of inmates and flee to the neighboring Gweiran district of Hassakeh, witnesses and officials said.

The SDF initially said it had thwarted the breakout and arrested 89 militants sheltering nearby, but later acknowledged that inmates had taken over parts of the facility.

It said on Sunday that 17 of its forces were killed in the deadliest rioting in detention centers holding thousands of suspected militants arrested after they were defeated with U.S. support in north and east Syria.

The Kurdish forces said militants staged a new attack on the prison Sunday in an attempt to break the security cordon and support inmates who are still in control of parts of the prison, where clashes continue, according to local media.

Hassakeh Governor Ghassan Khalil told Syrian state media that some 4,000 civilians have fled to areas controlled by Syrian government forces in the city and its suburbs. He told state TV that authorities set up three shelters for the displaced and mosques were also asked to open their doors for those who were forced to leave their homes.

The Pentagon confirmed the U.S.-led coalition had carried out air strikes in support of the SDF as it sought to end the prison break.
The Britain-based Syrian Observatory for Human Rights, an opposition war monitor, said that since Thursday night, some 123 people were killed, including 77 ISIS gunmen, 39 Kurdish fighters and prison guards and five civilians.

Arab tribal figures in touch with residents in the area said U.S. coalition troops had taken over positions around the prison and planes were seen flying overhead.

Gweiran Prison is the largest of around a dozen facilities run by U.S.-backed Syrian Kurdish forces holding suspected ISIS fighters.

Gweiran holds more than 3,000 inmates, including ISIS commanders and figures considered among the most dangerous.

The relatives of many inmates say they are young children and others arrested on flimsy charges or for resisting the SDF’s forced conscription.

Most Arab inmates have been held without charges or trial, fueling resentment by tribal members who accuse the Kurdish forces of racial discrimination, a charged denied by the Kurdish led forces.
The U.S.-based Human Rights Watch says the SDF holds about 12,000 men and boys suspected of Islamic State affiliation, including 2,000 to 4,000 foreigners from almost 50 countries.

Thousands of others are held in secret detention centers where torture is rife, civic groups say. The Syrian Kurdish forces deny the accusations.

The inmates are held in overcrowded prisons where conditions are inhumane in many cases, according to Human Rights Watch and other rights groups.

Some Arabs, who form a majority of the inhabitants of the areas under the control of the Syrian Kurdish YPG militia, accuse the Kurds of discrimination, an allegation rejected by Kurdish officials.
‘Most sleeper cells’ mobilized.

Local elders say support for Islamic State, which has resorted to guerrilla attacks since losing its last significant piece of territory in Syria in 2019, has grown with rising local resentment against the Kurdish-led rule.

At its height, the Islamic State group’s self-styled caliphate covered a third of both of Iraq and Syria. The ensuing war against them lasted several years, killed thousands, and left large parts of the two neighboring countries in ruins. It also left U.S.-allied Kurdish authorities in control of eastern and northeastern Syria, with a small presence of several hundred American forces still deployed.

Despite their defeat in Syria nearly three years ago, ISIS sleeper cells have carried out deadly attacks against SDF as well as government forces on the west bank of the Tigris River in eastern Syria.

On Friday, the SDF’s top military commander, Mazloum Abadi, said ISIS mobilized “most of its sleeper cells” to organize the prison break.

The militants, armed with heavy machine guns and vehicles rigged with explosives, attacked Thursday evening, aiming to free their comrades.