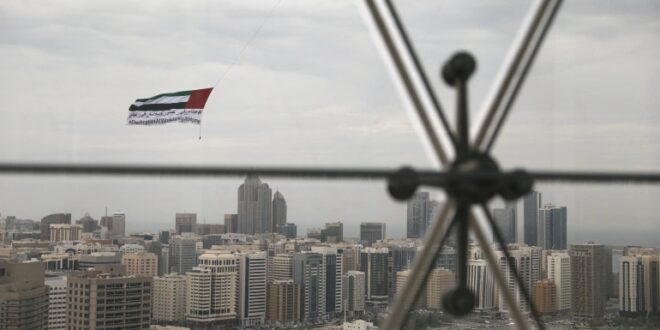 Iraqi militia attack on UAE a ‘message from Iran’

Analysts say drone strikes intended to put the UAE on notice for its involvement in Yemen and normalisation of ties with Israel.

The drone attack by a little-known armed group in Iraq on the United Arab Emirates (UAE) this week has raised questions about Baghdad’s involvement in regional tensions between Iran-backed Houthi rebels in Yemen and the Saudi-led coalition.

Alwiyat al-Waad al-Haq (AWH), or the True Promise Brigades, claimed responsibility for the strike on the UAE on Wednesday, saying in a statement it launched “four drones targeting vital facilities in Abu Dhabi” in retaliation for the Emirates’ policies in Iraq and Yemen.

Several analysts linked the strikes to a shadowy militia Kataib Hezbollah (KH), a powerful Iran-backed Shia armed group in Iraq that has been listed by the United States as a “terrorist organisation”.

The incident brought to light that the UAE was now being targeted from its north and south, after three recent attacks launched by Houthi rebels in Yemen.

Following the drone strikes, Iraqi Shia leader Muqtada al-Sadr condemned the attack in a statement, saying some “terrorist outlaws” have dragged Iraq into a “dangerous regional war” by targeting a Gulf state.

Although al-Sadr called for an end to the war in Yemen and the normalisation of ties with Israel, he denounced violence as a means to these ends.

While the attack from Iraq was a significant development, analysts said it did not indicate that Baghdad was being pulled deeper into regional tensions between Iran – which is aligned with Yemen’s Houthis – and Saudi Arabia, which has fought with the UAE in Yemen since 2015 against the rebels.

“Iraq has already been involved in this conflict, with the Hashd [paramilitary factions] and associated Shia jihadist groups having close ties to the Houthis,” said Talha Abdulrazaq, an Iraq expert and researcher at the University of Exeter’s Strategy and Security Institute.

“Previous strikes against Saudi official complexes and oil facilities have been launched from Iraqi territory,” he added.

Before Wednesday’s incident, Alwiyat al-Waad al-Haq claimed a drone attack targeting the Yamama Palace in the Saudi capital, Riyadh, in January 2021, saying it was retaliation for a suicide bombing claimed by the ISIL (ISIS) group in a Baghdad shopping district two days earlier.

Lahib Higel, a senior Iraq analyst at the International Crisis Group, said Iraq is “already part of Saudi-Iran tensions and will forever be a part of them as long as they exist”.

“The attack does not necessarily mean that Iraq will be dragged further, but it’s a strong indication that the divide in Iraq [between pro-Iran and pro-Saudi factions] … even within the so-called Shia house will continue,” said Higel.

The rivalry between US ally Saudi Arabia and Iran, which is on an opposing side to Riyadh and Washington in multiple Middle East conflicts, has long played out in Iraq.

While some Iraqi groups, including the current government, pivot towards Riyadh, many powerful Shia paramilitary groups and resistance factions, including Kataib Hezbollah, support Tehran. Also, as home to powerful Iranian-backed militias, Iraq has been used as a battleground between Iran and the US.

In January 2020, a US drone strike killed Iran’s revered general Qassem Soleimani and Iraqi militia commander Abu Mahdi al-Muhandis, pushing Washington and Tehran to the brink of war. Iran and affiliated Iraqi militias have since targeted several US diplomatic sites and military bases where US troops were stationed.

Higel said if the attack was consented by Iran it was likely a two-pronged message that “it can strike from different places, and not just Yemen [and] it does not approve of the recent visit by the Israeli president to the UAE”, or more broadly normalistaion between Israel and several Arab states.

Israeli President Isaac Herzog made his first visit to the UAE last week, a month after Naftali Bennett became the first Israeli prime minister to visit the Gulf country.

The warming of diplomatic ties came after the Emirates normalised ties with Israel in September 2020. Three other Arab countries – Bahrain, Sudan and Morocco – also forged diplomatic relations with Israel under the so-called Abraham Accords brokered by the United States.

Tamer Badawi, an Iraq analyst and doctoral researcher at the University of Kent, referred to AWH as either a “façade or actual surrogate that operates on behalf of KH”, saying in addition to its rejection of normalisation with Israel, the attack had an additional “message from Iran” ahead of soon-to-be-held talks with Saudi Arabia in Baghdad.

“The recent attack from pro-resistance groups in Iraq on Abu Dhabi has its drivers in Iraq and it likely reflects Tehran’s approval.

“It is unclear if the attack would help Iran build leverage prior to talks or undermine its position, but increasing attacks on Abu Dhabi whether from Iraq or from Yemen certainly warn Saudi against developing ties with Israel,” said Badawi.

According to Badawi, the AWH’s attack on the Emirates also reflects domestic politics and internal tensions in Iraq, after Iran-backed paramilitary groups and their political wings lost a significant number of seats in Iraq’s parliamentary elections on October 10.

“KH and other groups are politically frustrated by the outcome of the elections and the continuous attempts made by Muqtada al-Sadr to minimise their political stakes in the upcoming government,” said Badawi.

“Such an attack on Abu Dhabi satisfies their [pro-Iran groups’] supporters and constituencies, but also sends a menacing message to political adversaries such as al-Sadr himself.”

Since his strong election showing in the October vote, al-Sadr has reiterated his commitment to form a “national majority government”, which would essentially sideline powerful pro-Iran groups and figures that suffered devastating losses in the elections. These include former Prime Minister Nouri al-Maliki and the Fatah alliance, the political bloc that houses the Popular Mobilisation Forces.

Iraq has seen worsening violence since the vote with a number of attacks hitting Baghdad, including explosions that targeted banks associated with Kurdish politicians, grenades that landed on Sunni party headquarters and offices, and rockets that fell onto the US embassy in the Green Zone.

“The political gains of al-Halbusi and his ‘frenemy’ al-Khanjar are perceived to have been thanks to the political engineering of Abu Dhabi and Ankara,” said Badawi.

“Their [militias’] thinking could be that if their [Sunni factions] regional interlocutor can be bombarded, they can be coerced more easily to realign away from Sadr.”