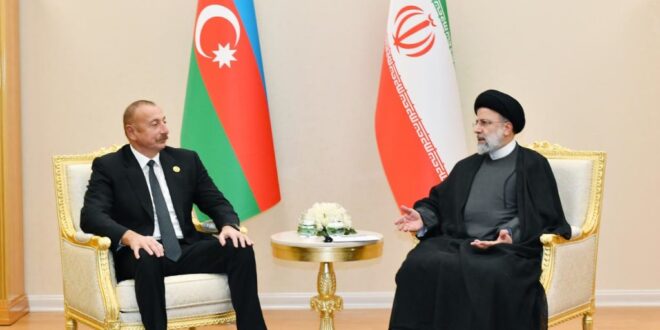 Tensions Deescalate Between Iran and Republic of Azerbaijan

Relations between Iran and the Republic of Azerbaijan underwent acute conflict and tension in September–October 2021. However, since mid-October, the two countries have endeavored to manage the frictions and reduce the disagreements in their relationship. Recently, on January 26, 2022, Azerbaijani Defense Minister Zakir Hasanov visited Tehran and met with his Iranian counterpart, Mohammad Reza Ashtiani, as well as President Ibrahim Raisi (Caspian News, January 26). At least five factors appear to drive this bilateral effort at rapprochement:

First, Iran is motivated by security and geopolitical considerations. Last autumn, the Islamic Republic held the largest military exercises, on its northwestern border, since the collapse of the Soviet Union (see EDM, October 6, 2021). The maneuvers were demonstrative by design, to showcase to Baku Tehran’s sensitivity to what it perceived as the Azerbaijani side crossing several “red lines.” Those critical considerations for Iran include preserving the geopolitical balance in the South Caucasus; safeguarding international borders in this region (especially the 38-kilometer border between Iran and Armenia after the implementation of the so-called Zangezur corridor—see EDM, January 28, 2022); as well as preventing Israeli, terrorist or proxy forces from massing anywhere near Iran’s borders. However, Tehran realized that limiting itself to a purely military show of force could push the Republic of Azerbaijan even closer toward Turkey and Israel, which would definitely not be in Iran’s national interest.

Second, pursuit of a de-confliction-oriented “Neighborhood Policy” (or “Neighbors First Policy”) is one of the main priorities of the government of President Raisi, who came to power in August 2021 (Tehran Times, September 6, 2021). Under this policy, the top three goals for Iran are to resolve its disputes with Tajikistan and Turkmenistan, continue the tension-easing negotiations with Saudi Arabia in Baghdad, and reduce the strain in relations with the United Arab Emirates. Last fall’s sudden, simultaneous escalation in tensions between Iran and the Republic of Azerbaijan, thus, threatened to hamper the Raisi government’s other “Neighborhood Policy”–related objectives. For this reason, Tehran sought to approach its relations with Baku with a form of “strategic patience” and “lack of direct reaction.”

Third, the Raisi administration’s other stated foreign policy priority is “Economic Diplomacy,” which is closely linked to the “Neighborhood Policy.” Since more than 50 percent of Iran’s trade volume with the South Caucasus region is with the Republic of Azerbaijan, this country naturally enjoys an important role and position in both Tehran’s “Neighborhood Policy” and “Economic Diplomacy.” In this regard, Iran, Azerbaijan and Turkmenistan’s signing of an enhanced trilateral natural gas swap deal back in November (Fars News Agency, November 27, 2021) clearly underscored Tehran’s strategic economic considerations toward Baku. One particularly crucial economic facet of the Republic of Azerbaijan for Iran is its position astride several trans-regional transit routes, including ones linking Iran to the increasingly important markets of Russia and the Eurasian Economic Union (EEU) (see EDM, June 3, 2021). Overland corridors via Azerbaijan, especially the Astara–Baku highway, are in better condition compared to Armenian roads. As for railways, Iran is trying to complete the only remaining section of rail directly connecting Iran, Azerbaijan and Russia. Baku loaned Tehran $500 million in credit for the Rasht–Astara railway line, which will become part of another key overland transit link with the EEU. The operation of these transportation routes, naturally, requires a reduction in tensions and a “de-securitization” of the Iranian-Azerbaijani shared border.

Fourth, Baku has its own motivations and interests when it comes to managing and reducing bilateral tensions. From the point of view of the Republic of Azerbaijan, worsening relations with Iran could push the latter into a closer partnership with Armenia. This fear was seemingly illustrated on October 4, 2021, at the height of the Iranian-Azerbaijani dispute, when Armenian Foreign Minister Ararat Mirzoyan visited Tehran (ILNA, October 4, 2021). Moreover, after the Azerbaijani government began enforcing a $130 toll on Iranian trucks traveling via the Goris–Gapan highway (which dips into Azerbaijani territory), Iran and Armenia proceeded to endorse the development of an alternative transit route, the Tatev–Aghvani highway, which would avoid Azerbaijan altogether (see EDM, October 27, 2021). Finally, at the end of 2021, the Iranian government approved the construction of a new Islamic Republic consulate in Gapan, Armenia (Mehrnews, December 29, 2021).

The Nakhchivan exclave is another vital concern for Azerbaijan. Other than Armenia, Iran is the only country that borders both mainland Azerbaijan and Nakhchivan; and after the First Karabakh War, citizens and trucks traveling between both parts of Azerbaijan would routinely drive across Iranian territory. Additionally, Iranian gas swaps play an important role in supplying energy to Nakhchivan. Thus, at least until the implementation of the “Zangezur corridor” across southern Armenia (which will more directly connect mainland Azerbaijan and Nakhchivan) and the completion of the Iğdır gas pipeline between Turkey and Nakhchivan, Azerbaijan’s economic dependence on Iran in these spheres will remain a key consideration for Baku’s foreign policy.

The fifth noteworthy driver of Iranian-Azerbaijani rapprochement has been Russia’s indirect role in the process. Moscow has been focused on advancing the 3 + 3 (Azerbaijan, Armenia, Georgia, plus Russia, Turkey, Iran) negotiation format for cooperation in the South Caucasus, and it hosted the first meeting in this diplomatic configuration on December 9, 2021. The 3 + 3 talks specifically seek to ensure the full implementation of the Second Karabakh War ceasefire agreement (signed by Armenia, Azerbaijan and Russia on November 9, 2020), especially its ninth clause—to remove roadblocks and revive the derelict Soviet-era railways that cross the southern Caucasus. That goal, naturally, requires stability in the region. In addition, Moscow also seeks to augment the land and rail routes via linking Russia, Azerbaijan and Iran in order to increase trade between Russia (and the EEU) and Iran. Russia’s interest in reducing tensions between Tehran and Baku was clearly demonstrated during Iranian Foreign Minister Hossein Amir-Abdollahian’s visit to Moscow on October 6, 2021 (Iran International, October 24, 2021).

The combination of military-security, geopolitical, foreign policy and economic considerations have helped to pull Iran and Azerbaijan back from the brink of more serious conflict at the end of last year. And now, both sides are looking to pacify and heal the relationship with those strategic issues in mind. It remains to be seen how far this reconciliation can go, but clearly the trend lines at the moment point toward a desire in Tehran and Baku for a more neighborly and mutually beneficial relationship.