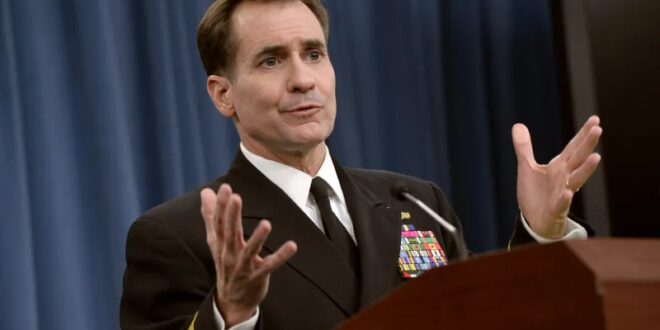 After the US government reported in January 2022 that the Russian government had planted spies and saboteurs in Ukraine for a potential false-flag attack as a means to invade the country, US officials have now reported discovering a plot to create a “graphic propaganda video” that could be used as a pretext to invade Ukraine.

Pentagon Spokesperson John Kirby had announced that they uncovered information that the Russians were to hire actors who would be mourning after an attack on Russian territory, with casualties to Russian civilians. The Russian government was prepared to use corpses in the fake video and the actors to play the mourners.

“We believe that Russia would produce a very graphic propaganda video, which would include corpses and actors that would be depicting mourners and images of destroyed locations, as well as military equipment at the hands of Ukraine or the West, even to the point where some of this equipment was to be made to look like it was western-supplied,” said Kirby.

Kirby stated that these propaganda videos were not new tactics by the Russians, as the Kremlin allegedly used misdirection and disinformation to invade Crimea in 2014. “We’ve seen these kinds of activity by the Russians in the past, and we believe it’s important when we see it like this that we can call it out,” the Pentagon spokesperson said.

In an interview with CNN, US Ambassador to NATO Julie Smith also stated that these false-flag attacks are quite common for Russia’s military playbook stating, “So what you heard today is just another piece of information where Russia is clearly laying the groundwork to destabilize Ukraine from within and find a pretext to take action using the military forces that it’s built up around the border.”

State Department Spokesperson Ned Price, who also spoke about the alleged video, shared Kirby’s statements about Russian false-flag attacks, stating that these videos are “one of a number of options that the Russian government is developing as a fake pretext to initiate and potentially justify military aggression against Ukraine.”

However, several journalists were pressing the US officials for evidence of the Russians’ fake video. Neither Kirby nor Ned Price, State Department Spokesperson, were prepared to offer further evidence.

In a heated exchange with Associated Press reporter Matt Lee, Price could not provide any solid evidence for the Russian propaganda video. Lee pushed Price for answers, “It’s an action that you say they have taken, but you have shown no evidence to confirm that,” and described the report by Price as “Alex Jones territory you’re getting into now.”

The journalist continues with his line of questioning, “What evidence do you have to support the idea that there is some propaganda film in the making?” said Lee.

“Matt, this is derived from information known to the US government, intelligence information that we have declassified,” Price replied.

“Okay, but where is this information?” Lee continued.

“I just delivered it,” Price answered.

“That’s not evidence, Ned. That’s you saying it. That’s not evidence. I’m sorry… I would like to see some proof that you can show that shows the Russians are doing it. Ned, I’ve been doing this for a long time,” an irate Lee replied.

These propaganda claims are being made after a series of failed diplomatic talks between the United States, the United Kingdom, Ukraine, and Russia, making the situation much tenser amid troops building up around the Ukrainian-Russian border.

The British government has said that it agreed with the United States’ information and intelligence reports. They are part of the Five Eyes network, an intelligence alliance comprising the US, UK, Australia, Canada, and New Zealand.

“This is clear and shocking evidence of Russia’s unprovoked aggression and underhand activity to destabilize Ukraine,” said British Secretary of State Liz Truss in a Twitter post.

As for the Kremlin, they vehemently deny the accusations of a false-flag attack and escalate the tensions on the border. They also have denied any intentions of invading Ukraine, according to interviews done with Russian Spokesperson Dmitri Peskov.

“It’s obvious that these are not steps aimed at de-escalating tensions, but on the contrary, they are actions that lead to increasing tensions,” Peskov referring to the additional 3,000 US troops being sent to Poland and Romania.

The Soviets used a false flag operation in its war with Finland in 1939 when they used their own artillery to shell the Russian village of Mainila and blamed the Finns for it.

The Nazis also began WWII with the invasion of Poland using a similar pretext, staging a whole series of attacks on civilian installations in Germany by Nazi SS and SD members dressed in Polish Army uniforms. Concentration camp prisoners were killed by lethal injection, dressed in Polish army uniforms, and then shot for effect were left at the scene as evidence.

Post Views: 276
Previous Tensions Deescalate Between Iran and Republic of Azerbaijan
Next US Say Russia Has 70% Of The Troops Needed For ‘Imminent’ Invasion Of Ukraine