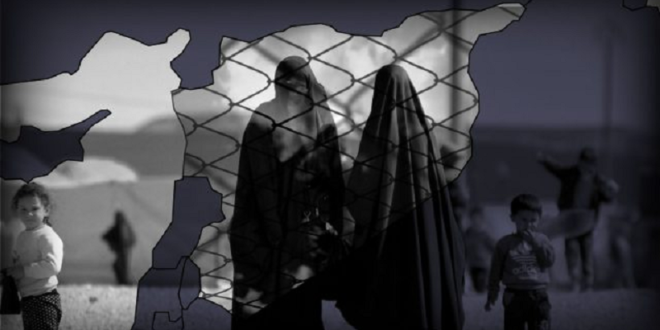 More than two dozen Serbian women remain trapped in refugee camps in Syria, waiting so far in vain to be repatriated by the Serbian state. Whispered messages via banned mobile phones provide a chilling glimpse of their day-to-day plight.

The messages are whispered, but the fear comes over loud and clear.

“Every woman in this jail cries like a baby every day,” says Aiba [not her real name], a Serbian woman lured to live under the Islamic State and who has been held in a Kurdish-run camp in Syria since 2017.

In a world in which the smartphone is ubiquitous, for most in Camp Roj possession of one is considered a violation of camp rules for which the guilty party can be beaten, threatened, and sent to solitary confinement.

But for Aiba, her phone is her only link to the outside world. When someone informed on her, she says she was threatened with electric shocks in front of her children and confined in the camp jail for four months.

“They took me into a small room with space for only one mattress and you cannot move. It was as cold as an icebox; they didn’t give me a blanket and I had bronchitis,” Aiba described in a voicemail message to a friend in Serbia from April 2021, one of a series of voice and text messages BIRN was given access to.

“There was a camera inside, filming everything. When I ran out of air I would wave at the camera, banging on the door and crying so they could release some air. Once, when I had heart and breathing problems, I gave a silver ring I had with me to a guard so she could take me outside for a bit.”

The last message reviewed by BIRN, sent by text, reads: “I cannot talk anymore. I am afraid to be caught again. They would take my head off.”

According to data compiled by NGOs, some 26 women from Serbia are being held along with their young children in refugee camps in Syria, their rights violated on a daily basis.

Most are paying the price of having followed the promises of their male partners of a better life under an Islamic State caliphate that took in swathes of Iraq and Syria, only to see the militant group routed in March 2019.

But while some states in the Balkans have sought to repatriate and reintegrate their citizens from such camps, Serbia has yet to heed the calls of international organisations, including the United Nations, to come to the aid of its own citizens still trapped in Syria.

Such women suffer from the stigma of having lived under the Islamic State, making them ‘Islamic fundamentalists’ and accomplices in ‘terrorism’ in the eyes of many. Experts speculate that authorities in predominantly Orthodox Christian Serbia might do more were those in question not members of a Muslim Bosniak minority that lives in a pocket of southwestern Serbia on the border with Montenegro.

“When I heard their stories I could not sleep,” said Dzeneta Agovic, who runs the NGO Impuls in Tutin, southwestern Serbia, one of the only organisations providing any support for the women. “Even today, after so many years, when they ask me is there any news from state institutions I feel bad because there is none.”

“Those women are Serbian citizens facing horrible conditions in a foreign country and the state is supposed to do everything to return them,” Agovic told BIRN. “The state doesn’t view this as a priority, but I think they would put more effort in if they were of Serb ethnicity.”

Neither the Serbian government nor the embassy covering Syria – currently located in neighbouring Lebanon – responded to requests for comment for this story.

‘Imagine it’s your child’
Faiza’s daughter had just turned 18 when she left for Syria in 2014, lured by a man she met online who sent her money for the journey.

Such accounts are common. Experts have dubbed it the ‘lover boy’ method of indoctrination, in which a religiously fanatical partner persuades a young girl to join him in the ‘promised land’ where they can freely and fully practice their religion. For many, the dream is quickly shattered.

“They just get hooked on the story of better life and purer faith, but as soon she crossed she realized it was all a hoax,” Faiza [not her real name] told BIRN.

The relationship lasted only a few months but, given women could not remain single under the Islamic State, Faiza’s daughter married another man from the same Sandzak region of southwestern Serbia. They had a boy in 2017 and a girl the following year, but the younger child died when three projectiles struck the house they were living in.

After a failed attempt to escape to Turkey, Faiza’s daughter and grandson, now four years old, were taken to Camp Roj. It is not known what happened to the husband.

“For almost four years they are in that camp where there is no proper food or water,” said Faiza. “She has asthma, back pain and they are not providing her with proper medicine. The food prices are skyrocketing and sometimes we can’t get money to her through an intermediary.”

“Imagine it’s your child. Just imagine. How would you feel in my shoes?”

Such pleas, however, have largely fallen on deaf ears in Serbia. Their only real support comes from NGOs such Agovic’s Impuls or Belgrade-based ASTRA, which works with victims of human trafficking.

“I help them as a sort of psychological counselling and working on the empowerment of those women,” said Agovic. “We spent so much time together.”

Serbia has historically viewed Islam with suspicion and Agovic worries that the Islamic State stigma attached to the women is preventing the state from doing what it can to bring them back.

Agovic nevertheless expressed hope, citing a February 2 between families of the women and Gordana Comic, Serbia’s minister for human and minority rights.

“She told us she will do everything she can to push this issue within the state, but also with international human rights organisations,” Agovic told BIRN. Comic has not commented publicly on the issue.

While a part of the Serbian public views such women as fanatics and criminals, experts at ASTRA say there is clear evidence they are victims of “coercion to commit crimes” exerted by their male partners and other Islamic State fighters around them.

Turn back the clock

Samira’s sister left for the former Islamic State stronghold of Raqqa in Syria in 2017, joining her husband who had departed a year earlier and told her stories of a ‘true sharia life’ dedicated to prayer and spirituality. She is also now trapped in Camp Roj.

“If she could go back in time she would have never left,” Samira [not her real name] told BIRN. “That’s what she constantly repeats to me.”

Like Aiba, Samira’s sister was also put in the camp jail for four months after she was caught using a mobile phone. But she refused to discuss conditions inside the cell, Samira said.

“I then realised from other women what is going on in the jail and the stories were horrible,” she said. “But the situation in the camp is bad enough already. No basic living conditions. My sister now weighs 50 kilos.”

“It is freezing there now in the winter. There are often fires and it can happen that during the winter women and children get burned since several tents catch fire and there is no chance for them to be saved.”

Faiza, who has yet to meet her four-year-old grandson, said no one could dispute that the children bear no blame; every year that passes, she said, is a lost year in terms of their education and socialisation. Women in the camps say male children are removed from their mothers when they turn 10 years old.

“The kids do not know anything, they are running around on the streets and in the dirt without conditions for education,” she said. “In a way, they don’t know most of the things from the ‘outside’ world.”

“I really beg for help to get those children back. Nothing is their fault.”

Agovic, of Impuls, told BIRN: “The repatriation of children together with their primary caregivers is an angle we are taking.”

In one of the voicemails this reporter heard, Aiba said that camp guards threatened to take her children away if she ever spoke out about her experience in the camp jail. But still she speaks.

“What we experienced here, it cannot even be put to words,” she says. “Both physical and psychological torture. It is time to get out of this madhouse; four years is too much.”