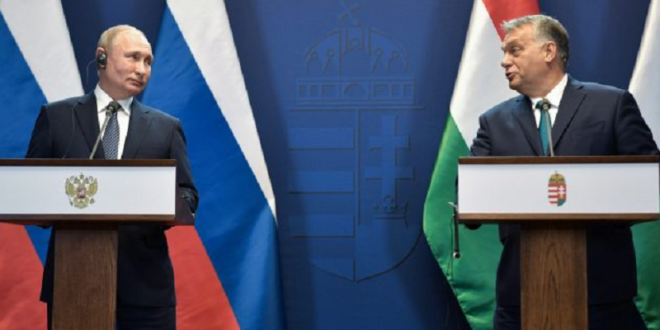 Hungary’s flirtation with the Russian president did not start with Orban, but it is the current premier who has turned it into an unequal marriage. How did a politician who launched his career on the back of anti-Russian slogans end up becoming Putin’s main ally in the EU?

In June 1989, a barely 26-year-old law student – unshaven, shaggy hair – catapulted himself to global fame with a speech on Budapest Heroes’ Square demanding that the government start immediate talks about the withdrawal of Russian troops from Hungary.

At a time of delicate political transition, when Hungary was on its way to gradually freeing itself from Soviet dominance but with no guarantee of success, Viktor Orban became an instant symbol of courage and freedom for many. Even though it later turned out that Soviet troops were already headed out of the country and Orban was fully aware of that, he grasped the political momentum masterfully to build his legacy as a no-holds-barred freedom fighter in Central Europe.

For almost two decades, Orban remained faithful to his pro-European, anti-Kremlin stance. Yet in February 2022, 32 years after his ground-breaking speech on Heroes’ Square, the same Orban – though with visibly less hair and a few extra pounds – stood idly by as Russian President Vladimir Putin lambasted the West and fantasised about turning back the clock to 1997, labelling NATO’s Central European enlargement a provocation towards Moscow.

Memories must have haunted Orban at that moment. It was the Hungarian prime minister who signed Hungary’s NATO accession in 1999 and who, during Russia’s invasion of Georgia in 2008, called it an “imperialistic action of pure power politics” – a sentence he would much rather use to describe Brussels these days.

Times change, politicians too, but few have gone through such a fundamental transformation as Viktor Orban.

“During Orban’s first government, between 1998 and 2002, Hungary’s relations with Russia were at an all-time low,” explains Geza Jeszenszky, a former Hungharian foreign minister who also served as US ambassador during the first Orban government, in a phone interview with BIRN.

Orban was the exception among Hungary’s political leaders at the time, being the only one who did not strive to maintain good relations with Russia. “During the 1999 Kosovo crisis, when Russia sent a humanitarian convoy to Serbia, Orban forbade its entry into Hungary,” Jeszenszky recalls.

That ban escalated into a serious diplomatic spat, with both Hungary and Russia summoning home their ambassadors. And the anti-Russia policy was upheld when Orban’s Fidesz party found itself in opposition during the 2000s. Fidesz condemned the socialist-liberal governing coalition for forging closer links with Putin’s regime and increasing the country’s energy dependence on Russia. “We don’t want to be the happiest barracks of Gazprom,” Orban quipped in 2007.

By contrast, Hungary’s then prime minister, the socialist Ferenc Gyurcsany, welcomed Putin to his private home in Budapest and published photos of him cuddling his dog, Toto.

“It was a general trend in Central Europe that leftist governments held close relations with Moscow and conservatives were rather critical. But this trend broke after 2010,” Andras Deak, an energy expert at the Institute for Strategic and Defense Studies (ISDS) of the National University for Public Service in Budapest, tells BIRN.

In the case of Orban, the seamless shift from Russophobe to Russophile was so abrupt that many even in his Fidesz party found it hard to explain. Analysts date it back to November 2009, when Orban, as opposition leader, was invited to St Petersburg to meet Putin at the congress of the Kremlin-backed United Russia party. They argue Orban clearly went on a mission to put bilateral relations on a new footing, and while it is unknown what exactly happened behind closed doors, Orban heard enough to drastically change his attitude towards Russia and Putin himself.

“Since then, Orban has not made any critical statement of Putin whatsoever,” Andras Racz, an expert at the German Council on Foreign Relations (DGAP), tells BIRN.

Orban, who had previously fought vigorously for energy diversification and to lessen the country’s energy dependence on Russia, practically promised Putin on the spot that Russia would build Hungary’s new nuclear power plant at Paks. The contract, which contained a 10-billion-euro Russian credit line, was signed only five years later but the deal was struck earlier. Critics say the nuclear power plant would further cement Hungary’s dependence on Russia rather than lessen it.

Rise of the East, decline of the West

What exactly made Orban perform such an abrupt about-turn over Russia is impossible to know for sure. Conspiracy theories about Putin holding sensitive kompromat on Orban are part of the rumour mill in Budapest, but no evidence of a secret dossier has ever been shown.

The investigative news site Direkt36 published an article about Orban’s “Russian Game” in 2018, claiming it was his economic guru, Gyorgy Matolcsy (now the governor of the Hungarian National Bank), who convinced him that the 2008 global financial crisis would lead to a complex transformation of the world economy with the rise of the East and the decline of the West.

Following his advice, Orban quickly paid a visit to Putin and Xi Jinping, then vice president and presumed heir to Hu Jintao as paramount leader, and the Hungarian government embarked on its Eastern Opening policy, with the grand ambition to see a third of exports headed toward the East. Unfortunately for Fidesz it was a complete failure, with Hungary’s non-EU trade actually falling from 23 per cent to 19 per cent between 2013 and 2019.

Others more sympathetic to the government argue it merely reflected geopolitical reality and it was the responsibility of the government to mend fences with Russia. “There was no fundamental shift, perhaps only some accents changed,” Zsolt Nemeth, a founding member of Fidesz, former state secretary at the Foreign Ministry and former chair of the Foreign Affairs Committee, tells BIRN. “You have to align your economic reality with your security interests, even if you are an EU and NATO member.”

And Hungary was no exception in this: major EU economies like Germany and France enjoy strong business ties with Russia. But from being a pragmatic and reliable business partner, Putin’s Russia has gradually grown into becoming something much more for Hungary – a close political ally for Orban.

In the summer of 2014, in his now infamous speech about “illiberal democracy” at Baile Tusnad, Orban described Russia – along with China and Turkey – as a model state for Hungary. As criticism against his nationalist-populist government and its illiberal tendencies has intensified in Brussels, travelling to Moscow meant less confrontation, less difficult questions about media freedom or democratic backsliding. It also meant less ideology, more pragmatism.

“Orban likes the Central Asian system where politicians run their countries like a family enterprise,” the former foreign minister Jeszenszky says, adding that Orban also developed a penchant for countries where entrepreneurs are not autonomous but heavily dependent on the political system. A system he was about to adopt in Hungary.

Rolling out the red carpet for Putin

From 2015 onwards, Orban increasingly found himself labelled as Putin’s Trojan Horse in the EU. Experts in Budapest recall that when Putin visited Budapest in February 2015, Ukrainian soldiers were fighting their deadliest battles against Russia’s proxy army in Debalceve, in eastern Ukraine.

There was absolutely no reason for the Hungarian government to roll out the red carpet for Putin; on the contrary, there was an EU-wide consensus about freezing bilateral talks with Putin after the pro-Russian militants’ downing of the Malaysian airliner MH17 over occupied eastern Ukraine in June 2014. The visit proved an affront to Brussels.

It is hard not to see a parallel with Orban’s recent meeting with Putin in Moscow on 1 February. Amid high international tensions, it was again Orban who stood side-by-side with Putin. Trying to sell his summit with Putin first as merely an opportunity for economic discussions, then as a peace mission, convinced few. “Judging from the outcome, there was absolutely no reason that could justify Orban’s journey to Moscow at this point, as not a single agreement was signed,” Andras Racz tells BIRN.

But former state secretary Nemeth disagrees. “Our relationship with Russia is rather complex, but we do not think politics based on sanctions is effective. A dialogue is needed, this is why French President Macron also visited Putin in Moscow, after Orban,” Nemeth explains.

He adds that Hungary takes the concerns of its Central European and Baltic partners seriously, and argues a long-term conflict between Europe and Russia is in nobody’s interests.

The Hungarian government is often quick to underline that Hungary has not vetoed any EU sanctions against Russia, though it is difficult to say what Orban’s position would be if the “robust and comprehensive” sanctions described by EU Commission President Ursula von der Leyen are unleashed on Russia in the event of an invasion.

Ultimately, though, Jeszenszky believes Orban’s Russia strategy weakens Hungary. “Sitting on the fence is never a good strategy in diplomacy – you can easily fall off and end up on the wrong side,” he warns. “As a solid member of the EU and NATO, Hungary would be more valuable. Russians do not appreciate servility.”

A long-term advocate of Central European cooperation, Jeszenszky admits he follows with anxiety the destiny of the Visegrad Four regional grouping. “If there is a country which can break this unity, it is Hungary,” he warns.

Paradoxically, Hungary, pushed to the sidelines in the EU for its maverick position on Russia, does not get much in exchange, most experts agree. Energy expert Andras Deak disputes the idea that Hungary will get Russian gas at a fraction of the market price, as claimed by Putin.

“He must have mistaken Hungary with Belarus,” Deak says, referring to Putin’s statement that Hungary gets Russian gas at one-fifth of the European price. “The long-term gas contract signed last year was the result of five-years-long tough negotiations. The discussions about the Paks nuclear power station are not going much more smoothly either. In energy questions, I see no sign of a love affair.”

Details of the Gazprom contract have not been made public, but speculation in the market is that Hungary is paying roughly the same as average European prices.

The real benefits of Hungary’s policy towards Russia are, inevitably, reaped by others in the system, say critics.

The mega-deals signed behind closed doors – the Belgrade-Budapest railway with China, and the Paks contract and just-announced 2-billion-euro freight train project, both using Russian credit lines – will all enable government-connected business people to make exorbitant profits on the overpriced, opaque projects.

Ultimately, then, Hungarian-Russian relations are probably less about illiberalism, conservative brotherhood or balancing the West and East, than about huge money transfers and profits to government-loyal ‘entrepreneurs’ at the expense of the Hungarian taxpayer.