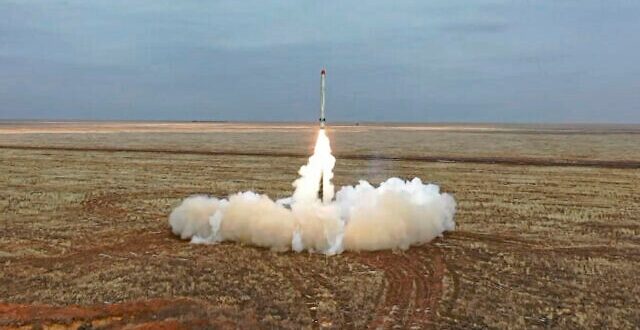 US defense chief says Russian forces moving into positions ‘to be able to conduct an attack’; Ukrainian soldier killed amid ‘dramatic increase’ in clashes with separatists

Russia test-fired nuclear-capable missiles on Saturday as Russian President Vladimir Putin oversaw a dramatic military exercise and as the United States again warned that it believes Moscow plans to invade Ukraine within days.

Ukrainian President Volodymyr Zelensky meanwhile arrived in Germany to shore up support among Western allies, despite a significant increase in shelling in the country’s east in which a Ukrainian soldier was killed.

The fierce US warnings and the evacuation of civilians from Russian-backed rebel regions in Ukraine have brought fears of a major conflict in Europe to their highest level after weeks of tensions.

The Kremlin insists it has no plans to attack its neighbor, which has angered Moscow by seeking closer ties with NATO and the European Union.

But Moscow is doing nothing to reduce fears, with state media accusing Kyiv of plotting an assault on the rebel-held pro-Russia enclave in eastern Ukraine.

Russian television showed images of Putin and Belarusian leader Alexander Lukashenko sitting at a round table in the Kremlin situation room, in front of a bank of screens showing military commanders as they test-fired their latest hypersonic, cruise and nuclear-capable ballistic missiles.

“All the missiles hit their targets, confirming their performance objectives,” the Kremlin said, adding that the drills included Tu-95 bombers and submarines.

Earlier, Kremlin spokesman Dmitry Peskov had made a reference to nuclear launch codes.

“Such test launches, of course, are impossible without the head of state. You know about the famous black suitcase and the red button,” he said.
‘Poised to strike’

Russia’s defense ministry said the exercise involved nearly all branches of the armed forces, including its strategic rocket forces, as well the Northern and Black Sea fleets, which have nuclear-armed submarines.

The US insists that, with some 150,000 Russian troops on Ukraine’s borders — as many as 190,000, when including the Russian-backed separatist forces in the east — Moscow has already made up its mind to invade.

Some of the Russian forces, around 30,000 troops, are in Belarus for an exercise which is due to end on Sunday. Moscow has said that these forces will return to barracks, but US intelligence is concerned that they could take part in an invasion of Ukraine.

US President Joe Biden said Friday that he was sure Putin had made the call to invade, regardless of warnings that it would trigger huge Western sanctions, and the attack could come in the next few days with targets that would include the capital Kyiv.

On Saturday, visiting NATO ally Lithuania, US Secretary of Defense Lloyd Austin said Russian forces “are now poised to strike” and “moving into the right kinds of positions to be able to conduct an attack.”

Russia has announced a series of withdrawals of its forces from near Ukraine in recent days, saying they were taking part in regular military exercises and accusing the West of “hysteria” with claims of an invasion plan.

But Putin has also stepped up his rhetoric, demanding written guarantees that Ukraine will never be allowed to join NATO and that the US-led military alliance roll back deployments in eastern Europe to positions from decades ago.
‘Dramatic increase’ in clashes

The volatile frontline between Ukraine’s army and separatists in the Moscow-backed breakaway regions of Donetsk and Luhansk has seen a “dramatic increase” in ceasefire violations, international monitors from the OSCE said.

Hundreds of artillery and mortar attacks were reported in recent days, in a conflict that has rumbled on for eight years and claimed the lives of more than 14,000 people.

Ukraine’s armed forces accused the rebels of a huge new wave of attacks on Saturday, saying there had been dozens of exchanges of fire by 7:00 a.m. local time, with one soldier dying from shrapnel wounds.

The soldier, a captain in an intelligence unit, was the fourth Ukrainian soldier to die in the first seven weeks of this year. At least 66 were killed in 2021, according to official sources.

The rebels, who also accused Ukrainian forces of new attacks on Saturday, declared general mobilizations in the two regions, calling up men to fight even as they announced mass evacuations of women and children into Russia.

The governor of the neighboring Russian region of Rostov declared a state of emergency as the first busloads of several thousand crossed the border, followed by Russian state media camera crews.

Moscow and the rebels have accused Kyiv of planning an assault to retake the regions, claims fiercely denied by Ukraine and dismissed by the West as part of Russian efforts to manufacture a pretext for war.

Russia’s Investigative Committee, which probes major crimes, said it had opened an investigation into media reports that a shell fired by Ukrainian forces exploded about a kilometer across the border in Russia’s Rostov region.

Russian news agencies earlier quoted anonymous sources as saying the shell had landed in the region, but had not caused any injuries or damage.

Despite the invasion warnings, Zelensky’s office said he would not change plans to personally attend Saturday’s Munich Security Conference.

“Volodymyr Zelensky expects concrete agreements concerning the delivery to our country of additional military and financial support,” his office said, adding that he would return to Kyiv later Saturday.

Post Views: 95
Previous Ukraine-Russia crisis: What to know as the tension grinds on
Next US veep meets Zelensky, warns Russia, says world at ‘decisive moment in history’