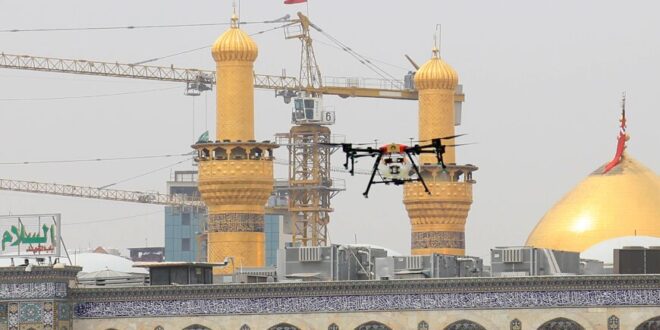 In addition to the challenges Iraqi security forces have faced over the years, they now also strive to get control of the new security challenges caused by drones.

The Babil Police Command announced Feb. 18 the seizure of nine drones as well as legal measures being taken against the drones’ operators in Babil governorate.

“Within the framework of the security plan prepared to track and reconnaissance the possession and use of illegal drones, the anti-crime detachments were able to seize [eight] drones of different types and arrested two of their [operators] in the city of Hilla,” the command statement read.

On Feb. 13, Shafaq News quoted a source in the US-led coalition as saying that a drone was shot down after it entered the border at Erbil, the capital of the Kurdistan Region of Iraq.

Shafaq reported the source as saying that “the Iraqi aerial defenses detected on Feb. 13, late at night, a number of unmanned aerial vehicles flying at a low altitude, heading from the eastern border area of ​​Iraq to the west. One of them was shot down at the Erbil border.”

A day earlier, the Wasit province Police Command held a meeting focusing on the illegal use of drones and warned that it would be made punishable.

A spokesperson for the Iraqi Joint Operations Command, Tahsin al-Khafaji, told Al-Monitor, “There are actually drones that are illegally flying the skies,” without explaining what measures the Iraqi forces are taking in this regard or who owns them.

Speaking to Al-Monitor on condition of anonymity, another high-ranking security source said, “Every armed faction in Iraq has drones. Dozens of drones are flying over Baghdad every day. Every faction has its own reconnaissance force.”

He added, “Some of these drones flew over the headquarters of the National Intelligence Service in Baghdad’s Mansour district several times.”

It is known that the pro-Iran armed factions possess drones, as showcased in the Popular Mobilization Units’ military parade in July 2021 in Diyala province. Yet the point here is that these drones are utilized separately from any coordination with Iraqi authorities.

Babil’s Police Command installed on Feb. 11 drone jammers against those operating “without a legal license,” it said in a statement.

Over the past few days, citizens of the central Euphrates provinces, mainly Karbala and Najaf, circulated information about the presence of drones roaming their skies. Some citizens used machine guns to fire at these drones but failed to shoot them down.

Speaking on condition of anonymity, a member of an armed faction close to Iran told Al-Monitor, “We have our own drones that we use when needed, and there is no coordination between us and the Iraqi government.”

He added, “Washington controls the Iraqi skies, so why does it not protect them? Why does no one object to the US drones when they fly over?”

The pro-Iran factions are accused of using drones for reconnaissance and spying purposes on Iraqi forces and convoys carrying logistical aid from the US-led coalition.

On Feb. 12, the Al-Abbas Combat Division, which is affiliated with Atabat units close to Grand Ayatollah Ali al-Sistani, deployed technical detachments after receiving information on the presence of drones. It said in a statement that “they consist of reconnaissance drones, not fighter drones.”

Fadel Abu Ragheef, a security analyst close to the Iraqi Intelligence Service, told Al-Monitor that “drones are being operated, and they are flying illegally. These drones pose a threat to security and stability.”

“Iraq needs to have legislation that regulates the use, possession and even purchase of these drones. These drones pose a major danger and consist of a new challenge for the Iraqi forces,” he said.

The use of drones is not limited to regular forces, armed groups and the Islamic State. Iraqi tribes, which are known to have light and medium weapons, are using drones in their conflicts.

Nasser Eidani, a member of the Basra provincial council, said in a press release that “some tribes are using drones in tribal clashes.”

Some livestock thieves in central and southern Iraq also use drones to surveil their targets.

In the past few months, drones have played a major role in the works of forces opposed to US-led coalition forces who relied on Katyusha missiles in their attacks south of Salahuddin province. On Feb. 15, the government-linked Iraqi Security Media Cell announced the thwarting of a drone attack on Balad air base in Salahuddin province.

It said that “the force tasked with protecting the external towers was able to see the drones with its naked eye and to make sure that they are hostile. The force opened fire at the drones before they flew away.”

The drones’ targets include the airports of Baghdad and Erbil and the Iraqi bases where the US-led coalition is stationed.

On Jan. 3, a drone was shot down on approach to the Victoria base at Baghdad International Airport where US and Iraqi forces are based. This video, which was posted by the Security Media Cell, shows the moment the drone was shot down as it attempted to attack Ain al-Asad air base in Anbar province, where the US-led coalition’s forces are stationed.

The groups carrying out attacks against Iraqi facilities and US interests have intensified attacks using drones. This is the most effective and sophisticated way to carry out attacks. At the same time, it allows them to shift suspicions away from themselves and reduce their human and material losses.

The attack that targeted the house of Iraqi Prime Minister Mustafa al-Kadhimi in November 2021 is the most prominent drone attack in Iraq to date.