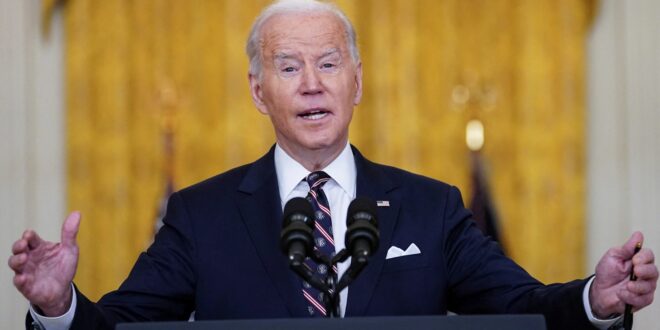 President Biden announced several new economic sanctions against Russia on Tuesday, one day after the Kremlin moved to formally invade two separatist regions of Eastern Ukraine that have long been under the control of its proxies.

“This is the beginning of a Russian invasion of Ukraine,” Biden said. “I’m going to begin to impose sanctions in response, far beyond the steps we and our allies and partners imposed in 2014. If Russia goes further with this invasion we stand prepared to go further.”

In what he referred to as the “first tranche” of expected sanctions, Biden announced the “full blocking” of Russia’s VEB bank and the country’s military bank, as well as sanctions on Russian sovereign debt, which Biden said would help cut Russia off from western financing. Biden continued that the U.S. will begin on Wednesday to sanction members of Russia’s elite and their family members.

“Because of Russia’s actions we worked with Germany to ensure Nord Stream 2 will not, as I promised, will not move forward,” Biden added

Meanwhile, the president authorized additional deployments of U.S. forces to the Baltic nations of Estonia, Lithuania, and Latvia, because of the continued presence of Russian troops in neighboring Belarus. Biden emphasized that the deployments were purely defensive in nature.

“We still believe that Russia is poised to go much further in launching a massive military attack against Ukraine. I hope I am wrong about that,” Biden warned.

A senior administration official initially declined to specify whether Russia’s movement of troops into eastern Ukraine constituted an invasion that would trigger major sanctions, in comments to reporters on Monday. Instead, President Biden signed an executive order prohibiting Americans from trading and investing in Donetsk and Luhansk, the separatist regions of eastern Ukraine that have now been formally occupied.

German chancellor Olaf Scholz announced on Tuesday that his country would freeze the approval process of the Nord Stream 2 pipeline, which was built to supply European nations with natural gas from Russia.

Biden threatened earlier this month to “bring an end” to Nord Stream 2 in a joint press conference with Scholz, although the German chancellor did not repeat Biden’s threat at the time.

“If Russia invades, that means tanks or troops crossing the border of Ukraine, again, then there will be no longer Nord Stream 2. We will bring an end to it,” Biden said at a press conference with German chancellor Olaf Scholz, without specifying how he would “end” the pipeline.

Putin set out three demands to resolve the disputes between Russia and Ukraine, saying that Ukraine must recognize Russian sovereignty over the Crimean peninsula, renounce its attempt to join the North Atlantic Treaty Organization, and partially demilitarize.

The Russian president recognized the independence of Ukraine’s separatist enclaves on Monday evening. In a televised speech that lasted for over an hour, Putin claimed that Russia and Ukraine share a cultural and historical unity, and that Ukraine could never be truly independent.

“Ukraine is not just a neighboring country to us, it is an inherent part of our own history, cultural, spiritual space,” Putin said, with comments translated live on the Russian state-owned network RT. “The modern Ukraine was completely created by Russia. To be more exact, by Bolshevik communist Russia.