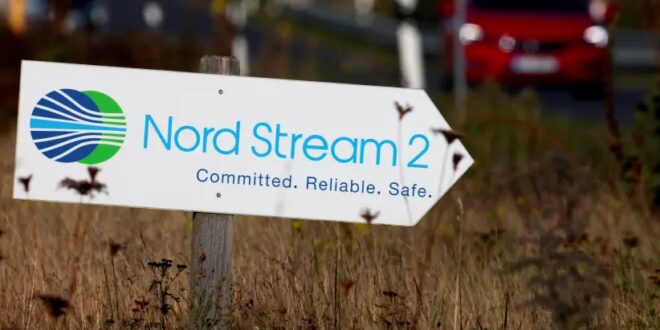 Europe’s most divisive energy project, worth $11 billion, was finished in September.

Europe’s most divisive energy project, worth $11 billion, was finished in September, but has stood idle pending certification by Germany and the European Union.

The pipeline had been set to ease the pressure on European consumers facing record energy prices amid a wider post-pandemic cost of living crisis, and on governments that have already forked out billions to try to cushion the impact on consumers.

But on Tuesday the European benchmark gas price, currently the Dutch March contract, was up 10% to 79.28 euros per megawatt hour (MWh) at 1416 GMT, much like the price for the fourth quarter, when Nord Stream 2 had been expected to start.

Dmitry Medvedev, Russia’s former president and now deputy chairman of its Security Council, tried to rub salt in that wound.

“Welcome to the new world where Europeans will soon have to pay 2,000 euros per thousand cubic meters!” he tweeted – suggesting prices were set to double.

President Vladimir Putin did pledge, however, that Russia would not interrupt any of its existing gas supplies.

Germany gets half its gas from Russia and had argued that Nord Stream 2 was primarily a commercial project to diversify energy supplies for Europe.

But despite the potential benefits, the pipeline had faced opposition within the European Union and from the United States on the grounds that it would increase Europe’s energy dependence on Russia as well as denying transit fees to Ukraine, host to another Russian gas pipeline, and making it more vulnerable to Russian invasion.

“It suggests that Germany is actually serious about imposing tough costs on Russia.”
‘TRUE LEADERSHIP’

Washington welcomed Scholz’s announcement, saying it had been in close consultation with the German government overnight.

“This is a morally, politically and practically correct step in the current circumstances,” he said. “True leadership means tough decisions in difficult times. Germany’s move proves just that.”

German Chancellor Olaf Scholz said he had asked the economy ministry to make sure certification could not take place now.

“The appropriate departments … will make a new assessment of the security of our supply in light of what has changed in last few days,” he said.

But he told journalists in Duesseldorf that prices were indeed likely to rise further in the short term.

The Russian state-owned gas giant Gazprom owns half the pipeline, and the rest is split between Shell, Austria’s OMV, France’s Engie, Germany’s Uniper and Wintershall DEA.

Analysts had expected it to pick up the procedure in mid-year after the operator did as requested.