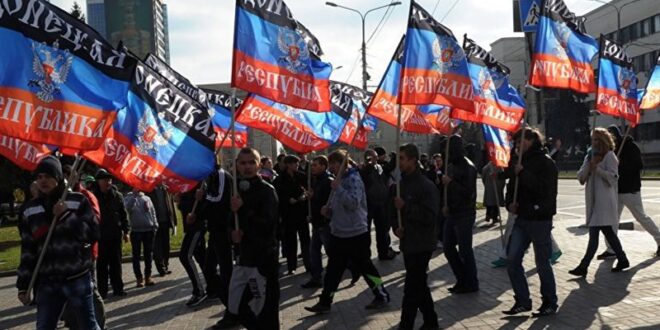 Why Putin Recognized The Russia-Backed Separatists In Ukraine – Analysis

At the end of a bitter and bellicose speech in which he took aggressive aim at Kyiv and the West, Russian President Vladimir Putin said he was recognizing the Moscow-backed separatist entities that control parts of eastern Ukraine as independent countries — and quickly signed a decree making it official.

For years, and even in recent months, it was widely believed that Putin would refrain from making such a move. After all, it would put a potentially powerful lever of influence over Kyiv — the Minsk accords, agreements aimed to end the war that has killed more than 13,200 people in the Donbas since 2014 and resolve the conflict between the separatists and Ukraine’s government — out of reach.

So, why did he do it? Here are some possible reasons.

Signed in February 2015, the agreement known as Minsk 2 was seen by Moscow as a way to gain strong sway over Ukrainian policy — domestic and foreign — by handing a large measure of autonomy to the Russia-backed forces who had held parts of the Donetsk and Luhansk regions — the Donbas — since the spring of 2014.

But Russia and Ukraine have fundamental disagreements over key aspects of the pact, including the sequencing of the confidence-building steps it calls for. And Putin may have given up hope that the agreement would ever be implemented on Moscow’s terms.

Avoid A Wider War – Or Just Postpone It?

Listening to Putin’s address to the nation late on February 21, one might be excused for thinking he was about to announce what the United States has said could come at any moment, with more than 130,00 Russian troops massed near Ukraine’s borders: a large-scale military assault on the neighboring nation.

It still could: Putin’s litany of complaints about Ukraine echoed previous harangues about a country he suggested was a fabrication of the Bolshevik leader Vladimir Lenin, hinting at ambitions that could hardly be satisfied by declaring two chunks of the country independent.

And several analysts predicted that recognition would only be the first step toward what could be a major military campaign aimed at bringing down the government in Kyiv.

But at least for now, Putin may have seen recognition as a way to extract something he can claim as a win while avoiding two extremes — a massive new invasion and the bloodshed that would ensue, on the one hand, and the appearance of a climbdown in the face of Ukrainian and Western resolve on the other.

At the same time, Russia will presumably be able to continue exerting military pressure on Ukraine. In the Donbas itself, that pressure may loom larger than ever: The separatists claim the Donetsk and Luhansk regions in their entirety, not just the smaller chunks of territory that they hold, so recognition carries the implicit threat of a push to take over the rest of the two provinces.

Putin may have hinted at that possibility when he suggested in his speech that some parts of Ukraine should rightfully belong to Russia. Another form of pressure, in fact, is the suggestion that Russia could formally absorb the two territories, something that two of Putin’s top lieutenants hinted at — ostensibly by mistake — in the closely choreographed and national televised Kremlin Security Council meeting that preceded his address and the recognition decrees.

Putin’s speech sounded like its aim could have been to prepare Russians for a more aggressive effort to subjugate Ukraine at some point in the future. But while a persistent and unprecedented clampdown on civil society and dissent has weakened the opposition and sapped the people’s potential to protest, Putin may understand that for most Russians – struggling with the COVID pandemic and economic straits — recognition of the Moscow-backed separatists is far more palatable than a major war with a neighbor few see in quite the same light as his repeated remarks about Ukraine suggest he does.
Weaken Kyiv…

In the eyes of the Kremlin, the recognition decree takes a bite out of Ukraine, excising a chunk of its territory eight years after Russia seized control of the Crimean Peninsula.

Putin may hope that this will weaken Ukrainian President Volodymyr Zelenskiy. He won election easily in 2019 after a campaign in which one of the main platforms was a pledge to end the war in the Donbas — but not by surrendering territory.

…And Divide The West

A full-fledged invasion would be likely to increase unity in the West, bolstering the resolve of the United States and the European Union to present a common front.

Putin could be calculating that recognition will leave Western countries struggling to agree on how to respond and on what kind of sanctions to impose, particularly if Russia and the separatists do not seek to push into government-held territory in the Donbas and if Moscow begins to pull forces back from the borders — though so far there has been no indication that the latter would happen soon.

Putin’s recognition decrees indicated that Russia would send military forces into the Donbas very soon, at least for a limited period of time — something it has denied doing throughout nearly eight years of war there, despite evidence of substantial involvement of Russia troops and officers.

Putin may hope to prompt a military response that could serve as a pretext for the further use of force to achieve his aims in Ukraine.

“Main takeaway from that barnburner of a speech is that Russia now has given itself a pretext to respond to ‘attacks’ on [the separatists] with no need to conceal its direct military involvement,” Samuel Charap, a senior political scientist at the RAND Corporation think tank, wrote on Twitter.

Until now, “Russia didn’t have a justification for overt military intervention even under its own laws, now it will,” Charap wrote. “This is an important element of the narrative that was missing.”