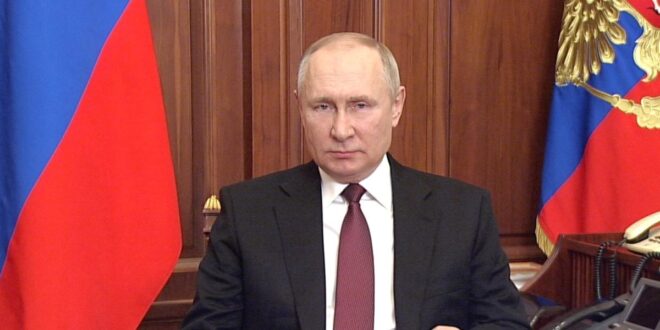 Russia’s strategic concerns regarding the post-Cold War European security architecture, as expressed in the two treaty drafts published by Moscow in December 2021, may be seen as legitimate, or at least deserving to be heard and taken seriously. The new lines of argument expressed in Vladimir Putin’s Feb. 21 and Feb. 24 speeches, however, have irrevocably strayed from those initial concerns.

For a long time, the Kremlin was able to strike a balance between Russia’s pragmatic strategic interests and its more ideologically loaded constructs inspired by different brands of conservative and/or nationalist thinking. This balance now seems to have been lost, a sign of the ascent of an increasingly rigid ideology in the Kremlin. This week’s speeches have confirmed this dramatic turn, with the construction of a narrative legitimizing the military intervention in Ukraine along three key ideological lines: a historical one, an ethnic one and a political one.

The Historical Line: Ukraine as a Bolshevik Creation

The Russian president started his Feb. 21 speech with long statements on the historical unjustness behind the creation of the current Ukrainian state. Ukraine is presented as part of Russia’s longue durée imperial history, with no history of its own as a fully independent state. Putin argued that the Bolsheviks created the Ukrainian state at the expense of the Russian heartland. Not only did the Ukrainians have the Bolsheviks—and then Stalin and Khrushchev—to thank for having established their artificial statehood, Putin argues, but they also have post-Soviet Russia itself to thank for not claiming the territories that became Ukraine by Soviet decision. “And today the ‘grateful progeny’ has overturned monuments to Lenin in Ukraine. They call it decommunization. … We are ready to show what real decommunizations would mean for Ukraine,” concluded Putin, laying out the trope that recognition of the Donetsk People’s Republic (DNR) and the Luhansk People’s Republic (LNR) is an act aimed at fixing Soviet mistakes.

This narrative derives from conservative monarchist circles, represented by people such as media mogul Konstantin Malofeev and his Tsargrad TV. Its modus operandi is the idea that the Bolsheviks were anti-Russians at heart who created Ukraine in order to break up the Russian nation and gave power to the empire’s other ethnic minorities in order to weaken the Russian state. Such fundamentalist discourse not only interprets Soviet land management as Russophobia but claims that all such actions were illegitimate because the Soviet regime was itself legally illegitimate.

This narrative has circulated for years among certain segments of the Russian Orthodox Church and the propagandists of rehabilitating the White movement and the tsarist monarchy. For a long time Putin and his government tried to keep both “red” (pro-Soviet) and “white” (anti-Soviet) narratives equal, following a classic balancing act that the regime had been building between different vested interest groups. But the anti-Bolshevik narrative has been elevated quite suddenly over the last two to three years, resulting in a rapid decommunization of the historical narrative at the higher level of the state apparatus.

This discrepancy in discourse is noticeable when comparing Putin’s July 2021 text on the unity of Russia and Ukraine and his Feb. 21, 2022, address. The 2021 text is already negative on the Bolsheviks: “One fact is crystal clear: Russia was robbed, indeed.” But the general tone was less critical of the Soviet Union and more respectful toward Ukraine, even if it was a clearly Russia-centric reading of Ukraine’s history. These nuances have totally disappeared in the 2022 storyline, which presents Ukraine as a stateless territory, governed by the illegitimate U.S. puppet administration. The anti-Bolshevik “white” narrative seems therefore in the process of winning out amid the upper echelons of the state.

The Ethnic Line: ‘The Genocide of Russians’

Then Putin moved to a second line of argument: the genocide of Russians in Ukraine. The argument is not a new one. It was already well developed in the 1990s, advanced by the ethno-nationalist opposition, such as Dmitri Rogozin’s movement, the Congress of Russian Communities, directly inspired by Alexander Solzhenitsyn’s discourse of a demographically dying Russia. “Genocide: Russia and the New World Order” was even the title of the 1999 book by Sergey Glazyev, who was at that time in the national-patriotic opposition before occupying a series of government positions.

The genocide narrative was revived in 2014 in order to justify Crimea’s annexation and support for the Donbas secessionist movements, with the deaths of 42 pro-Russian protestors in the Odessa Trade Unions House fire as its centerpiece. The concept has since been regularly mentioned (in 2015 and in 2018) by Putin himself or by Foreign Minister Sergei Lavrov, and has been revitalized in light of the current crisis. Putin stated that “what is happening in the Donbas today is genocide,” a discourse echoed by State Duma Speaker Vyacheslav Volodin and complemented by two measures: the opening of a criminal case by the Russian Investigative Committee over the discovery of supposed mass graves of civilians killed in the shelling of Donbas and the release of documents to the U.N. Security Council accusing Ukraine of “exterminating the civilian population of the self-proclaimed People’s Republics of Donetsk and Luhansk,” thereby also referring to the idea of a genocide.

The use of the genocide argument allows Russia to play several cards at once: It echoes the demographic fears of Russians’ ethnic disappearance, presents itself as the mirror of the Ukrainian narrative on the Holodomor and seeks to guilt-trip Germany for its Nazi past. For instance, German Chancellor Olaf Scholz was mocked by Russian officials for not recognizing the supposed genocide. It also allows Russia to participate in the “search [for] lost genocide” (to borrow a phrase from political scientist and Holocaust scholar Evgeny Finkel) that is happening all over Central and Eastern Europe, using victimhood as a tool for political legitimacy.

The third argument is a more political one: the “denazification” argument, put forward mostly in Putin’s Feb. 24 speech justifying his military intervention in Ukraine. It, too, is far from a recent trend, as it has a long Soviet history and was revived in 2014. Obviously, Russia’s memory of the Great Patriotic War has become a central part of the nation-building process and the symbolic politics built by the Putin regime in the last 20 years. But the obsession with presenting Russia as the antifascism power par excellence has now transformed from a nation-building tool to a literal weapon.

Since the mid-2000s, memory wars with Central and Eastern European countries have entailed a permanent mutual otherization, with Russia accusing its western neighbors of becoming “fascist again.” Meanwhile, Central and Eastern European countries—mainly Poland, the Baltic states and Ukraine—along with some Western experts, politicians and media accuse Russia of being a fascist regime or a fascist country.

Since 2014, Russia has emphasized that Ukraine is supposedly run by a fascist regime and allows radical far-right movements to proliferate. This line constitutes the other side of the “genocide” coin, as it projects neo-Nazi Ukrainians committing genocide against Russians. Justifying Russia’s military intervention as a “denazification” strategy supposes some kind of punitive operations—already mentioned in the Feb. 21 speech—against targeted people but also, and mostly, tries to present Putin as a “Nazi hunter,” thereby confirming that the metaphor has now become literal.

What is striking is that Russian audiences do not seem to respond the same way to the different ideological lines advanced by Putin. According to Google Trends and Yandex Stats, after Putin’s Feb. 21 address, searches for “Ukrainian history” increased sharply, while searches related to “genocide” did not register a spike. After his Feb. 24 speech, one of the key searches on the Russian net was “what is denazification,” a sign that people are trying to make sense of the official reasoning. However, tellingly, after both speeches, the top search was the ruble-dollar exchange rate, confirming that the Russian population is mostly interested in the impact of the current crisis on their everyday future.
Conclusion

The 2014 Crimean crisis saw the blossoming of a romanticized war narrative around the idea of Novorossiya. Now, gone are the romantic exaltations of a reunified Russian nation and of young men wanting to try their hand at war as a kind of self-fulfilling coming of age à la Byron. Today’s language is a darker, vernacularized mixture of negative messaging in which the strategic line of argument—that Russia feels insecure in the current European security architecture and needs to be given a say—is lost in profit of purely ideological arguments inspired by imperialist and nationalist thinking.

The decommunization of Russia’s official historiography as revealed by Putin’s speeches and the literal weaponization of the anti-fascism positioning are more than concerning. It seems suddenly that the key issue for Putin is not so much NATO and European security architecture as the simple existence of Ukraine. In Russian, the word “Ukraine” means a frontier. In his two speeches, Putin seems to have “decapitalized” Ukraine from its statehood and nationhood in order to transform it into a lowercase frontier territory in the American sense. Such an ideological shift can do nothing but cripple Moscow’s desire to have its strategic concerns heard on the international scene.