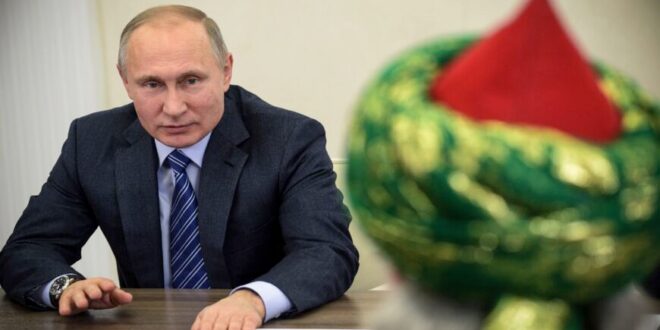 After the start of Russia’s military campaign against Ukraine and the resulting unprecedented sanctions against Moscow, the latter is focusing its attention on the leading states in the Islamic world and the greater Middle East to negate the impact of Western isolation.

The operation against Ukraine began when Pakistani Prime Minister Imran Khan was in Moscow on an official visit; he had arrived in the Russian capital on the eve of the launch of the military operation. This gave rise to speculation about whether the Pakistani leader’s visit could be considered an implicit endorsement of Russia’s actions.

In particular, US State Department spokesperson Ned Price was asked at a Feb. 23 briefing whether Washington considers the choice of the Pakistani prime minister to visit Moscow at this particular time the equivalent of “indirectly endorsing” Russian President Vladimir Putin.

“You would have to ask the Pakistani government. I’m just not in a position to offer an assessment on the timing of foreign counterparts’ travel to another country,” Price replied.

The visit was never rescheduled, despite obvious military preparations and sanctions imposed on Russia by the United States, the European Union and a number of other countries due to Moscow’s recognition of the independence of the Moscow-backed Donetsk and Luhansk regions in eastern Ukraine on Feb. 21. Khan arrived in Moscow on the evening of Feb. 23, on the eve of the invasion, but held talks with Putin on Feb. 24, when Russian troops were already advancing on Ukrainian territory.

Earlier, on Jan. 17, Khan thanked the president of Russia for his support on behalf of Muslims after Putin had said disrespecting the Prophet Muhammad is not part of freedom of speech. Putin “is the first Western leader to show empathy and sensitivity to Muslim sentiment for their beloved prophet,” Khan said after his call with the Russian leader.

Two days before the arrival of the Pakistani premier, on Feb. 21, Azerbaijani President Ilham Aliyev also visited Moscow. Amid the escalation between Russia and NATO and the preparation of a Russian military operation against Ukraine, Aliyev signed a declaration on allied cooperation between Azerbaijan and Russia.

Russia and Azerbaijan agreed to provide each other with military assistance.

“In order to ensure security, maintain peace and stability, the Russian Federation and the Republic of Azerbaijan may consider the possibility of providing each other with military assistance on the basis of the UN Charter, separate international treaties and taking into account the existing international legal obligations of each of the parties,” the declaration stated. In addition, Putin and Aliyev agreed to refrain from any actions that, in the opinion of one of the parties, damage the strategic partnership and relations between the two states.

Thus, Yerevan has lost its status as Moscow’s sole ally in the south Caucasus. This can also strengthen the depth of Moscow’s strategic partnership with those states that are already allies of Baku or have privileged relations with it. In particular, the signing of the Russian-Azerbaijani allied declaration is of particular importance since Azerbaijan is already an ally of Turkey on the basis of the so-called Shusha Declaration, and a strategic partner of Pakistan, with whom it repeatedly conducts joint military maneuvers.

In turn, Moscow can still count on Ankara’s special position, which differs significantly from the approach of other NATO member countries to the events in Ukraine and can be considered the most favorable for the Kremlin. First of all, we are talking about Ankara’s refusal to join the toughest anti-Russian sanctions.

Turkey also abstained on Feb. 25 from voting on the suspension of Russia’s rights in the Council of Europe, as “it stands for the continuation of dialogue under any circumstances.”

In addition, President Recep Tayyip Erdogan, despite statements condemning the Russian invasion of Ukraine, is still set to interact with and is ready for direct face-to-face contacts with Putin.

At a meeting of the ruling party on Feb. 26, where the main issue was the situation in Ukraine, Erdogan said, “In a telephone conversation with Mr. Putin, I invited him to Turkey to normalize the situation,” according to TGRT Haber TV channel.

In turn, Sheikh Ali Al-Qaradaghi, secretary-general of the International Union of Muslim Scholars, called for the speedy establishment of peace in Ukraine in a Feb. 27 Tweet. Qaradaghi also named Turkey and Pakistan as two states that could mediate the conflict.

“I urge countries that have good relations with the conflicting parties, such as Turkey and Pakistan, to make sincere and serious mediation efforts to immediately end the destructive war in which not only these peoples are losing a lot at all levels, but the whole world may be losing,” wrote Qaradaghi.

One should also pay attention to the position of another Middle Eastern country — the United Arab Emirates — which is currently a nonpermanent member of the UN Security Council. The UAE joined China and India in abstaining from a UN resolution condemning the invasion, in a position seen as favorable toward Moscow.

Abu Dhabi justified the abstention by saying the vote was a “foregone conclusion.”

“The result of this vote was a foregone conclusion, but the avenues for dialogue must remain open more urgently than ever before,” the UAE said in a statement put out by its permanent mission to the UN. “We urge for immediate de-escalation and the cessation of hostilities.”

It is important to note that the leaders of the Houthis in Yemen, following Russia, recognized the Donetsk and Luhansk republics, thereby confirming their loyalty to Russia. In this situation, Moscow has new opportunities to influence the leaders of the Houthis in terms of preventing missile attacks on the UAE, which can also be used to maintain a favorable attitude toward Russia from Abu Dhabi, which may try to take advantage of Russian opportunities to influence the Houthis. In particular, on Jan. 25, UAE Minister of Foreign Affairs Sheikh Abdullah bin Zayed Al Nahyan praised Russia’s support in the wake of the recent Houthi attacks on civilian targets in the UAE. The need for cooperation between the two countries on the Yemeni settlement track was also confirmed during a Feb. 24 telephone conversation between the foreign ministers of the UAE and Russia.

Taking into account the unprecedented sanctions against Russia that many states have imposed, cooperation with the states of the Islamic world and, above all, the Middle East may turn out to be one of the few “windows” in order to receive metered economic and political support.

At the same time, the sanctions imposed on Russia seriously restrict opportunities for interaction with the countries of the Islamic world. There are already certain problems with the supply of Russian weapons. This, in particular, is indicated by the refusal of Indonesia, Egypt and Algeria to purchase Russian Su-35 fighters, and the plans of the UAE to purchase a South Korean analog of the Russian S-350 air defense system or Saudi Arabia of a Chinese analog of the Russian Tor-M air defense system instead of Russian originals.

Nevertheless, there are other opportunities for developing military-technical cooperation with the states of the region in circumvention of sanctions, primarily related to their aspirations to develop their own military-industrial complexes and create their own military developments. But we must keep in mind that with every day of hostilities, the window of opportunity for Russia to maintain ties with the states of the Islamic world is narrowing.