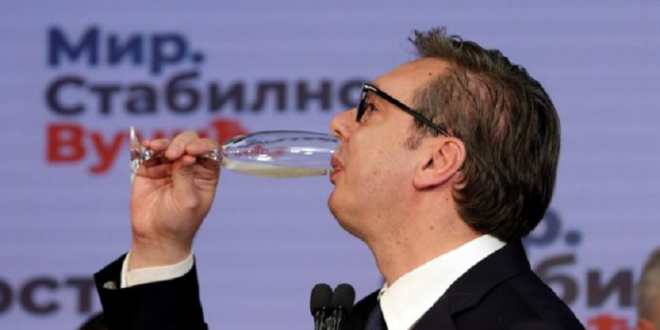 In Serbia’s Electoral Simulation, the Leader Outstrips the Party

Elections in Serbia are all about the Leader, the “boss.” The Party comes a distant second.
Basking in the glow of another election win on April 3, Serbian President Aleksandar Vucic told Serbs he was “the proudest man in the county.”

The reason for such pride was the 59.3 per cent he notched up in the presidential election, or roughly 800,000 more than all the other candidates combined.

Vucic’s party, the Serbian Progressive Party, SNS, also won, taking 42.9 per cent of the vote in a parliamentary election the same day. That’s also a convincing win, but the disparity between president and party raising questions about their respective ratings.

Running for president, Vucic won roughly half a million more votes than his party colleagues combined in the parliamentary race.

Vucic is brimming with pride as a way to divert attention from his party’s own disappointing result. The Progressives, in fact, performed worse than in 2016, when, unlike in 2020, the whole opposition took part. Then, they took 131 of parliament’s 250 seats. Now they will have 120 – not enough to form a government on their own.

The focus on Vucic’s result also masks the party’s poor results in the big cities of Belgrade, Nis and Novi Sad, where the Progressives fell significantly short of the national average – 36.7 per cent in Novi Sad, 37.1 per cent in Nis and 38.1 in Belgrade. The opposition says the Progressives won only 34.2 per cent of votes in the parliamentary election in the capital.

Another reason to emphasise Vucic’s “historic victory” is the result of the local elections in Belgrade, which were also held on April 3. Ten days later, the final results are still not known; unofficially, there is talk of an even split, 55 seats each, between the opposition and the parties in the current city administration – SNS and its junior partner, the Socialist Party of Serbia, SPS.

The election result in the capital may, after subsequent re-runs and appeals, be negative for the ruling coalition. And that is what the Progressives and their leader fear most. A defeat in Belgrade, a defeat anywhere, could trigger a domino effect in subsequent elections.

That’s why Ana Brnabic, the current prime minister, was effusive in hailing the victory of her “boss.”

“The hundreds of thousands of more votes that Vucic won in the elections than the SNS speaks to the fact that the citizens no longer equate Vucic and the SNS,” Brnabic claimed. “Aleksandar Vucic is de facto no longer part of the SNS, because he is on a political pedestal.”

A closer look at Vucic’s tally shows that comparing it to the share won by the Progressives serves only to fascinate the uninformed.

The SPS, the Serbian Radical Party, SRS, and the Alliance of Vojvodina Hungarians, SVM, had already delivered their votes to Vucic by not fielding their own presidential candidates and calling on their supporters to back the incumbent.

Indeed, the number of votes won by Vucic tallies almost exactly with the number that the Progressives, SPS, SRS, and SVM won in the parliamentary election. Hence how Vucic outperformed his own party.

While Vucic can count on winning re-election in the first round, his party’s prospects look increasingly bleak. It will only lose more votes in elections to come.

Journalist Ranko Pivljanin believes that the SNS has no rating at all; only Vucic is on the chart.

Milan St. Protic, former ambassador to the United States, thinks similarly, while political scientist Cvijetin Milivojevic questions whether the SNS even exists. “Vucic enveloped the party,” he said – the SNS does not fight elections under its own name but under his.

Without Vucic, the Progressives would not last a single summer. Not one prominent member of the party can count on the public’s trust.

The party leadership is made up of individuals whose integrity has been called into serious question, from Defence Minister Nebojsa Stefanovic to Finance Minister Sinisa Mali and Brnabic herself. They can do anything they want, providing they act in Vucic’s interest.

It is hard to find an SNS official who can rightfully boast of their knowledge and integrity, who did not buy their university diploma or whose property portfolio is not far beyond their officially modest means as public servants. Hence why the party has no Number 2. There is only the leader, followed by a big gap and a third-rate staff. They need Vucic like they need air to breathe.

Vucic, on the other hand, needs the party as logistical support in elections. The SNS campaign was conducted in such a way that the party was in the background and the president, who “takes care of the people and the state,” was in the foreground. He was flanked by uncompromised individuals who agreed to run for parliament on the SNS ticket – Dr Dana Grujicic, mathematician Stojan Radenovic, actor Lazar Ristovski and others.

The likes of Stefanovic, Mali, and Belgrade deputy mayor Goran Vesic were hardly seen. For Brnabic, it was hardly surprising that Vucic did not focus on promoting his own party because he was so busy dealing with “serious problems such as the crisis in Ukraine.”

For some, the 500,000-vote disparity between Vucic and the SNS is reason enough to repeat the parliamentary election.

Voters rightly turned out in force to support Vucic, said SNS deputy leader and Novi Sad mayor Milos Vucevic, but they “strayed when voting for parliament.” So let’s repeat the vote, he said. Vucevic presumably believes voters should be ‘disciplined’, but Vucic did not accept the proposal.

This analysis comes with a small caveat – the results are not final and minor shifts are possible. The bigger caveat is the catastrophic conditions in which elections have been conducted since the SNS came to power in 2012.

With a few exceptions, the media’s doors are closed to the opposition and to critical thinking; officials abuse state resources for the sake of their campaign; and voters can vote, but they have no say on who actually gets appointed.

Most civil servants were blackmailed to vote for the SNS; those on temporary contracts were told to secure 20 votes in order to earn an extension. Then there was the intimidation of opposition voters, classic vote-buying and election fraud.

In other words, elections in Serbia are conducted only to extend the mandates of Vucic and the SNS. Everything else is merely garnish on the main course.