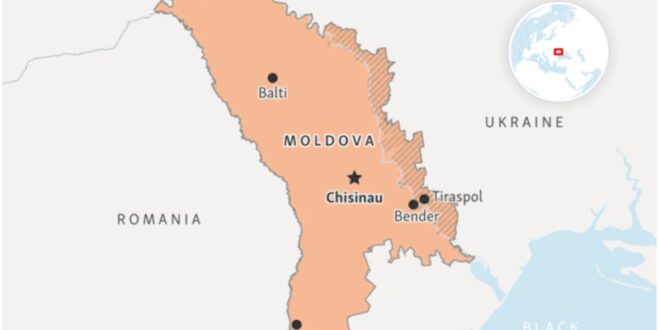 Following the start of Russia’s large-scale military re-invasion of Ukraine in February 2022, concerns arose about the role that the Transnistrian region of Moldova could play in the Kremlin’s war plans. The territory has been under Russian military occupation since 1992, with Moscow’s military, security and civilian officials directing, assisting and funding its administration. It has de facto been run like another Russian province, all while maintaining the façade of a separatist entity.

In the past week, a set of incidents in Transnistria renewed these anxieties. Most recently, a special edition of the separatist administration’s “official” newspaper, Pridnestrovje, dated May 2 but circulated online on April 30, anachronistically reported about “bloody terrorist attacks against the region during the May holidays.” The account claimed “dozens dead and hundreds wounded” and presented “the Transnistrian people’s” demands for Russian President Vladimir Putin to employ the Russian army in the region. That newspaper story assigned blame for the supposed (future) attacks on the Ukrainian Armed Forces “that had NATO [North Atlantic Treaty Organization] support,” while the Moldovan authorities purportedly provided target coordinates, including for civilian infrastructure (Newsmaker.md, April 30). The chief editor of Pridnestrovje denied issuing this edition, and called it a fake.

A few days prior to the incident, several peculiar attacks did hit the region. First, on the evening of April 25, three masked individuals assailed Transnistria’s “Ministry of State Security” (MSS) headquarters, in Tiraspol, firing at the building three times from anti-tank portable grenade launchers, before fleeing the scene. Given that it was a holiday, there were no casualties (TV8.md, April 27).

Then, on the morning of April 26, explosions reportedly damaged two large radio towers in the village of Mayak, operated by the Russian State Television and Radio Broadcasting Company and reportedly used to relay Russian radio programs (Vedomosti, April 26). The antennas (one megawatt and a half megawatt in power, respectively) were built in the 1960s by the Soviet Union; they were capable of broadcasting shortwave transmissions as far as the Americas and the Middle East. Even if they had not been harmed, they were expected to be replaced sooner or later by the Russian government. Therefore, the target again seemed deliberately chosen to minimize the consequences.

Finally, on April 27, the separatist authorities in Transnistria circulated news about an incident around the Cobasna ammunition depot, guarded by the Russian military, which involved gun shots (Newsmaker.md, May 2). Later on, however, the Moldovan representative at the Joint Control Commission—a trilateral command structure of the peacekeeping format composed of representatives of Moldova, Russia and separatist Tiraspol authorities—repudiated the claims, indicating that the shots were actually heard in Ukraine, some 2 kilometers away from the depot (Europalibera.org, April 27). The fact that this episode was inflated by the separatist authorities, including by claiming Ukrainian drones had been flying over the depot, suggests an attempt to artificially create a confrontation.

The separatist authorities in Tiraspol blamed “unidentified individuals from Ukraine” for the MSS attack, an accusation then widely circulated by the Russian mass media and officials (PNP, April 26). The justification was that “Ukraine is trying to spread the conflict into Transnistria.” Moldovan authorities assessed the series of events as a clash between competing groups in the separatist region, and perpetrated by a “party of war” to “destabilize the situation in the region” (Unimedia.md, April 26).

Plenty of other explanations have also been proposed, but Moldovan top officials generally dismissed the incidents as “provocations.” They insisted that the citizens on the right bank, controlled by the Moldovan government, are unlikely to be affected and that there was no imminent risk created by the incidents (Newsmaker.md, April 27). Both national and foreign experts reiterated that idea, indicating that the Russian forces in Transnistria are small and pose no threat to Moldova or to Ukraine.

Nevertheless, the series of late-April violent episodes represents a huge outlier, considering the generally calm situation in the region, established after active hostilities ended in 1992. Moreover, their context is worrisome, specifically having occurred amidst Russia’s active war against Ukraine and shortly after Moscow declared its intention to acquire control over southern Ukrainian territories—including the neighboring Black Sea port of Odesa—as part of phase two of its operation (TASS, April 22; see EDM, April 28, May 2). Putting together the people and resources to orchestrate these incidents in Transnistria would have required significant effort; and they form a clear escalatory chain, conveniently setting the stage to invite a Russian armed intervention to “protect the people of Transnistria.”

The logic of these events, including the fake newspaper edition, creates two conditions. First, it attempts to artificially generate an atmosphere of danger and create feelings of insecurity. Given the Kremlin’s earlier instrumentalization of aggression in Georgia and Ukraine, this artificial threat can be exploited either to bring in more troops or simply to use the Russian military administration and structures already in Transnistria to mobilize an armed force that draws on the local population and Tiraspol’s armed structures. Second, the incidents produced plenty of attention and actions in response, including the mobilization of the local security services and the establishment of check points. This noise is convenient to camouflage any unrelated military movements and mobilization inside Transnistria. These incidents, thus, resemble either a pretext for armed intervention or a smokescreen for military movements and preparations in the region.

Despite habitual minimization by many outside observers, when combined, the Russian military grouping in Transnistria along with local military and security forces should not be ignored—they can reach a force strength of 7,000–10,000 (Topwar.ru, April 27). Given the tremendous losses of Russian military personnel since February, and Moscow’s struggle to recruit more soldiers to complete its decimated units, Transnistria does look attractive. Furthermore, there are credible signals that the Russian military wants to further escalate and is lobbying to have the remaining domestic political limitations on the use of force lifted (The Moscow Times, April 2).

Thus, the Transnistrian region could become a mobilization reservoir, with the raised forces used either to subdue Moldova, assist an amphibious landing in Odesa region, or both. Skeptics who refer to earlier unsuccessful attempts by the Russian military to attack Odesa disregard the fact that the most-discussed failure, from first days of the war, was due to the refusal of a segment of the Russian marine infantry to attack (Kanal 24, March 1). The Transnistrian separatist authorities, however, would not be able to block the Russian military’s plans, even if they tried to risk it.