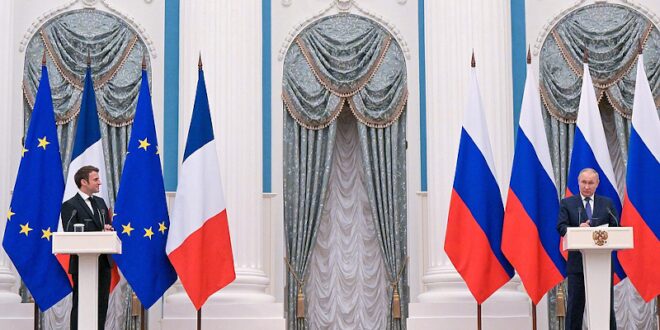 French President Emmanuel Macron last week had his first conversation with Russian President Vladimir Putin since March 29. This reestablishment of dialogue came three days after Macron had a call with Ukrainian President Volodymyr Zelensky. The phone call with Putin lasted for a reported two hours and 10 minutes.

Macron spoke frequently with Putin in the build-up to Russia’s invasion of Ukraine and in the weeks that followed. However, the French president had reportedly not talked to his Russian counterpart since evidence emerged of mass killings of civilians by Russian forces in the Ukrainian town of Bucha, which were widely condemned as war crimes. In contrast, the Kremlin’s stance is that the EU is ignoring war crimes by Ukrainian forces. The French presidential election, the second round of which took place on April 24, was another reason for the pause in conversations, as calls in March raised questions among critics as to whether Macron’s strategy was misguided and risked fueling Russian propaganda.

In a way, the pause in dialogue can be read as a pragmatic approach by Macron to avoid losing votes over any perceived miscalculation in his response to the Ukraine conflict. Having preserved his position as president of France, Macron is now continuing talks with his Russian counterpart. This fits in with the concept of a pragmatic foreign policy, which allies Macron’s efforts to build a new European space with his efforts to emerge as a peacemaker.

More specifically, in the week after the phone call, Macron shared his vision of reforming the European continent by establishing a new political organization to unite democracies on “core values,” including cooperation in infrastructure, energy, transport and the movement of people. This corresponds with his antecedent Francois Mitterrand’s proposal to broaden the European club when the Soviet Union collapsed in 1989.

This idea raises some questions. The first relates to the identity of Europe and its reflections in a new project. Macron indicated that the European club can also include “those who have left,” referring to the post-Brexit UK. One of the key reasons for the Brexit vote was the role of cultures and identity versus liberal values. The EU was initially established by Western European states, while many “others” that have joined since 2004 were on the other side of the so-called iron curtain and were powerfully integrated into the Soviet bloc during the Cold War.

Given this, to what extent will the lessons of the past and the EU project’s experience be considered and what will the European identity mean amid the new geopolitical realities? With the lessons of Brexit, will European liberal values, such as the promotion of democracy and human rights, be key, with the nationalist factor remaining in the background? For the insider in the UK, it seems the Ukraine conflict has significantly shaped the idea of identity perceptions in the country. Arguably, applying the logic of the Brexit vote, Ukrainians would have been considered as Eastern European in the past, but realities are different today.

Geopolitical and security concerns and the impact of the Ukraine war have changed the situation dramatically. As a Russian of Tatar (Muslim) origin who has lived for some time in the West, I have a complex identity. Participating in a conference discussing whether Ukrainians should be perceived as “whiter,” it was quite difficult to perceive the extent to which Ukrainian and Russian “whiteness” can be further differentiated. But what has been clear to me all these years is that the issue of “European identity” is very complex. Given this, Macron can emerge as a de facto leader of a European continent that is primarily united in its values, rather than trying to invest in this European identity.

In this sense, the suggested reforms can be an effective solution. But another question is where the borders of a new European project should end. It seems clear to me that Russia, despite its location, will not be invited to the project, so how will this relationship be developed? Macron’s view, stated in March, is that “Europe can’t be safe and at peace if (it) does not talk to Russia.” His position can be explained as an attempt to avoid any further escalation of hostilities and the enlargement of the war beyond Ukrainian borders. It also aims to reduce the economic implications of the conflict, which have already hit the European economy thanks to energy and fertilizer price rises, along with the anticipated damage to the global food supply chain.

In other words, not all Europeans share Macron’s views. Even France seems to have balanced its position. For example, on Sunday, Paris — as part of the G7 — pledged to stop importing Russian oil, aiming to bring “shame” on Moscow for its actions. The following day, however, Macron warned against humiliating Russia over the Ukraine war, believing that any further tensions would only serve to exacerbate the situation, seemingly suggesting that Europe should keep dialogue with Moscow open.

The proposition of a new European club opens the possibility for Macron to emerge as Europe’s de facto leader. It seems that his pragmatic approach covers both preserving and defending human rights and Western values, while at the same time keeping open the dialogue with Putin. If Macron is successful in his efforts and does emerge as the de facto European leader, we might expect that his pragmatic approach offers some hope that the Ukraine conflict can be resolved soon through diplomacy and the finding of common ground. It is always better to have cold peace rather than a war, isn’t it?

Post Views: 48
Previous Biden’s Disinformation Board Would Make Even Orwell Shiver
Next Corruption in the Russian Armed Forces