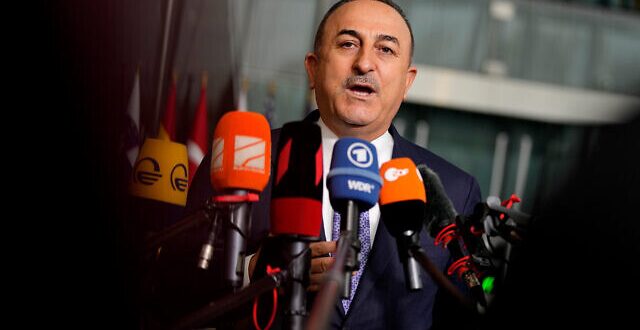 Turkey’s top envoy, Mevlut Cavusoglu, is set to visit Jerusalem next week in a diplomatic breakthrough, but his plan to go to holy site is causing tensions with Israel, report says

Turkish Foreign Minister Mevlut Cavusoglu is expected to visit Israel next week and plans to go to the flashpoint Temple Mount holy site, according to a Thursday report.

Cavusoglu visiting Israel would be a diplomatic breakthrough for the two countries, but his intention to visit the sensitive site in Jerusalem’s Old City has sparked some tensions between Ankara and Jerusalem, the Kan public broadcaster said.

Cavusoglu plans to go to the compound without any Israelis accompanying him, the report said, citing “an official familiar with the details.”

His plan has also sparked an argument involving the Shin Bet internal security service about the security protocol for his visit, the report said.

The Temple Mount is the most sacred place for Jews as the location of the biblical temples, and Al-Aqsa Mosque, which sits atop the mount, is the third-holiest site for Muslims. Israel claims sovereignty throughout Jerusalem and its Old City, but the Temple Mount compound, or Haram al-Sharif, is administered by the Muslim Waqf, and Jews are allowed to visit at certain times, but not pray there.

President Isaac Herzog and Cavusoglu first announced the Turkish envoy’s planned trip to Israel in March while Herzog was in Ankara.

Cavusoglu was supposed to visit in April, but the date was pushed back because Israel wanted to avoid further stoking a tense situation in Jerusalem during Ramadan, Kan reported. There was near-daily fighting between police and Palestinians in the capital during the holiday, mainly revolving around the Temple Mount.

Foreign officials sometimes visit the Western Wall, but usually not the Temple Mount, while in Jerusalem. In 2020, an unofficial economic delegation from the United Arab Emirates visited the Temple Mount as the country was approving a normalization agreement with Israel. Palestinian officials and passersby condemned the UAE group for visiting.

Ties between Jerusalem and Ankara have been warming, and Cavusoglu visiting Israel would be the first trip to the Jewish state by such a senior figure in the Turkish government in years.

Thursday’s report by Kan said that Cavusoglu will discuss reinstating ambassadors in each other’s capitals during his visit to Jerusalem, although previous reports have said that step is not yet on the table.

The mending between the countries’ ties hit a minor bump last month over the clashes in Jerusalem, with Turkish President Recep Tayyip Erdogan expressing his concern to Herzog over the fighting.

However, Erdogan said soon after that Turkey’s rapprochement with Jerusalem would continue despite the tensions over the Temple Mount. Erdogan said that Turkey will continue to loudly protest Israeli actions at the holy site, but that it will not have a direct bearing on the countries’ diplomatic ties.

“It is clear that the way to effectively defend the Palestinian cause is to have a reasonable, consistent and balanced relationship with Israel,” he told lawmakers in Turkey’s parliament. The speech marked a sea change from previous years, in which Turkey downgraded ties with Israel to protest actions in Jerusalem, the West Bank and Gaza.

Cavusoglu said last month that Turkey was seeking a “sustainable relationship” with Israel, but those ties depend on Israel’s policies toward the Palestinians.

“We expect from the Israeli side to respect the international law on the Palestinian issue,” he said.

Herzog’s trip to Ankara in early March was the highest-level visit by an Israeli official since former prime minister Ehud Olmert went to Turkey in 2008.

Once robust regional allies, Israel and Turkey have seen their ties fray during Erdogan’s lengthy tenure, as the Turkish president has been an outspoken critic of Israel’s policies toward the Palestinians.

Israel has been upset by Erdogan’s warm relations with Hamas, the terror group that controls the Gaza Strip.

The countries reciprocally withdrew their ambassadors in 2010, after Israeli forces boarded a Gaza-bound flotilla carrying humanitarian aid for the Palestinians, came under attack, and killed 10 Turkish citizens in the ensuing melee.

Relations slowly improved, but broke down again in 2018, after Turkey, angered by the United States moving its embassy to Jerusalem, once more recalled its envoy from Israel, prompting Israel to reciprocate.

Earlier this month, Erdogan sent a congratulatory letter to Herzog for Israel’s Independence Day and the two held a phone call, marking the third time in several weeks the two leaders spoke by phone.

Clashes and unrest broke out at the Al-Aqsa Mosque, and sometimes in the surrounding areas, nearly every day during the holy Muslim month of Ramadan in April. The fighting created some tensions with Israel’s Muslim-majority regional partners.

The Temple Mount is a frequent flashpoint of Israeli-Palestinian tensions, with clashes there last year helping precipitate the 11-day military conflict between Israel and terror groups in the Gaza Strip after the enclave’s Hamas rulers fired rockets at Jerusalem.

Jerusalem has remained on edge since Ramadan ended. Al Jazeera journalist Shireen Abu Akleh was killed during a firefight between Israeli troops and Palestinian gunmen in the West Bank earlier this month, causing outrage in the Palestinian public. Her funeral in the capital became a major incident when police beat pallbearers.

On Monday, Palestinians and police skirmished in East Jerusalem during the funeral procession of a Palestinian man who died after being critically wounded during clashes on the Temple Mount last month.