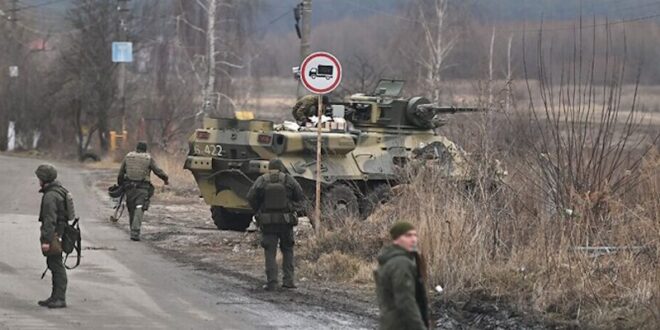 Ukraine: How Russia Is Emptying The World’s Breadbasket

As a Ukrainian living in Germany, Anna Vlasiuk has spent countless hours on the phone to make sure her family in north-western Ukraine was safe. Then one day, the war came to her local grocery shop.

“I went to the supermarket and there was a sign saying, ‘No sunflower oil in our store, due to the war in Ukraine,’ the 32-year-old human rights worker told IWPR. She added that her father, a farmer in the region of Rivne near the Polish and Belarus border, had been warning her that it was just a matter of time until the Russian invasion would hit the tables of millions in Ukraine and around the world.

There is growing concern about a Kremlin strategy to cripple food production in Ukraine, which is already having a disastrous impact on supplies around the world.

Ukraine is a global agricultural powerhouse. Its black soil is fertile, its land cheap to farm, and deep seaports have provided a convenient route to international markets. According to the UN agricultural agency, FAO, dozens of countries rely on Ukraine for at least 50 per cent of their wheat imports, including Africa’s Sahel region.

Two months into the war, the impact is clear. Exports from Ukraine have stalled as Russia blocks the ports and bombs depots, planting has slowed down and future harvests are in question, with experts remaining pessimistic about farming in eastern and southern Ukraine.

“A large area there is out of full control of Ukrainian military forces and there are problems with harvesting winter crops that farmers have sown before the war,” economist Vitalii Dankevych told IWPR. “In de-occupied territories, fields were heavily mined.”

Dankevych, a faculty head at Polissya National University in the north-western city of Zhytomyr, maintained that farmers will gather less than 30 per cent than in last year’s harvest. As millions of Ukrainians have fled, manpower will also prove to be a problem.

David Beasley, the executive director of the World Food Programme, stated that there was “no question” that Russian president Vladimir Putin was using hunger as a weapon against Ukraine. Ukrainian authorities accused Russia of engineering a famine.

According to the UN, Russia’s blockade in the Black Sea is preventing the export of about 4.5 million tonnes of grain. The Russian army has destroyed at least two storage facilities and troops have been accused of looting machinery as well as tonnes of stored grain, an act that Ukraine’s foreign minister Dmitro Kuleba said increased the threat to global food security.

On May 4, Taras Vysotsky, first deputy minister of agrarian policy, confirmed that Russian troops removed about 1.3 million tonnes of wheat from the occupied territories.

“On average Ukraine exported about five to six million tonnes of grain per month by sea, [feeding about] 400 million people worldwide,” explained Dankevych. “[It was] the bread basket of Europe and many Asian and African regions…. producing for world export about 16 per cent of corn, 12 of wheat and 50 per cent of sunflower oil.”

He added that, as ports were blocked, railway exports could handle only a “very small portion” of 600,000 tonnes in one month. In addition, Ukraine and the EU railtracks have different gauges, which adds a layer of difficulty.

Low supplies and high prices are already making some countries food insecure and supermarket chains in Europe are rationing the number of bottles of sunflower oil that one customer can purchase.

In Rivne, Anna’s father Valery said that money for the new planting season and selling grain from last year’s harvest were the two main problems small farmers like him face.

“[We] didn’t have time to sell our grain. Last year’s harvest was good, especially for corn. And this is also a problem with storage, if exporting through ports won’t be possible soon,” the 60-year-old told IWPR. He added that he had planned to grow sunflowers this year as Ukraine is equipped with large processing plants, making local production and logistics easier.

One of the largest processing plants of sunflower oil however is in Nova Kakhovka, a strategic southern port city on the Dnipro River, currently occupied by the Russians – as is the region’s main city of Kherson.

Kyrylo Lypko, an export key account manager at Chumak, which owns the plant and is one of Ukraine’s leading food processing companies told IWPR that “we don’t have export now, our factory is occupied”.

Valentyn Bevz works for an agricultural firm in Teplyk, a town in the western region of Vinnytsia close to the border with Moldova, that used to export large quantities of grains, in particular wheat.

“This has been helpful for keeping the firm alive in wartime. We have money for sowing in the new season. Planting continues, but the resources and logistics issues are costly,” he explained, adding that grain surplus could eventually be used to feed livestock in case ports remain under blockade. Not ideal for so much produce, he noted.

Getting back all the stock that is already sitting in Ukrainian ports is another issue.

“Some time ago I drove close to Yuzhny port, in the area of Odesa. The grains were unloaded back onto the rail cars, there were more than 50,” Benz explained to IWPR, adding that farmers must themselves bear all the costs of the complex logistics the port blockade had caused.

Russian troops occupied Volodymyr Semiryaga’s farm, in Peresadivka, a village in Mykolaiv region, for a week in March – and it was devastating.

“They fired from tanks towards our storage, which had equipment and products. It was all burned. Only a small tractor is restored now. There’s a very difficult situation, I need to work, and I don’t know how,” Semiryaga, who leases about 100 hectares of land to cultivate mainly grain and oilseed, told IWPR. Fighting continued about 40 kilometres from his village, he said, and he could not receive any credit for additional financing for his farm.

Dankevych warned that food security would remain a challenge through 2023.

“The market cannot adjust quickly and in a short time for this war,” he said. “This will have different effects [depending on] the regions: in the American market, it may increase food prices, in Africa and Asia it may mean hunger.”

Post Views: 82
Previous To approve Sweden and Finland’s NATO membership, Turkey wants its F-35s back
Next It’s Not Just The USA: The Economic Instability Is Global