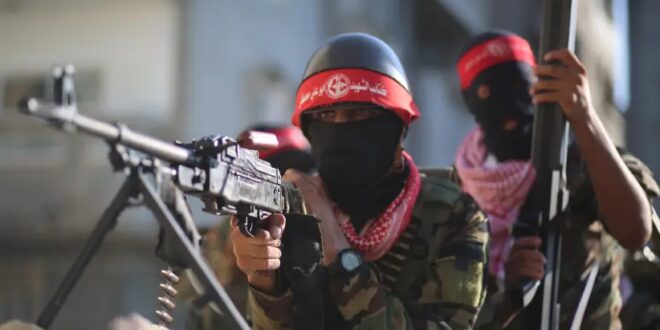 Canada’s list of terrorist organizations should be abolished, said Khaled Barakat — The subject of controversy in Canada for his alleged ties to the Popular Front for the Liberation of Palestine (PFLP) terrorist organization — at the International League of Peoples’ Struggle (ILPS) in Canada’s 5th assembly at the Ottawa city-owned Foster Farm Community Centre on June 3.

“It has to be abolished,” Barakat said at the event. He complained that Hezbollah, Hamas and PFLP we officially recognized by Canada as terrorist organizations.

“Canada is listing Palestinians and Arab organizations on the so-called terrorist list,” he said.

The Centre for Israel and Jewish Affairs (CIJA) noted on Thursday that Lonna Sabah and Rabbi Haim Rothman were Canadian citizens who were victims of PFLP terrorist attacks.

This is not the first time Barakat has called for the abolishment of the terrorist list. On a May 12 episode of the Security in Context Podcast, Barakat called for the list’s end. He was a guest on the podcast to denounce what he described as a “smear campaign” following an expose on Barakat in the National Post that reviewed the evidence of Barakat’s leadership role in the PFLP.
Support for “resistance”

At the June 3 ILPS event, Barakat stated his support for armed “Palestinian and Lebanese resistance.”

“Those who [don’t] want us to have armed struggle can please tell us how we can achieve our rights when we couldn’t achieve it by every other means possible,” said Barakat, also decrying Canadian political discourse calling for negotiations and two states living side-by-side, which he said was aparthied.
Event on Ottawa city property

According to the rental policy of the city of Ottawa, the municipality “will not provide public space, facilities and/or properties within its jurisdiction to an individual or group that supports or promotes views, ideas or presentations which promote or are likely to promote” violence or discrimination, contempt or hatred to a person based on national origin.

“We are extremely concerned that PFLP-terror tied individuals and organizations have been able to rent space that falls under the jurisdiction of the City of Ottawa, a clear violation of the city’s policies meant to protect religious, national, and ethnic groups from hate and incitement,” CIJA President and CEO Shimon Koffler Fogel said in a statement at the beginning of June.

CIJA said it had reached out to the city of Ottawa about the event a month ago, but the authorities took no action.

B’nai Brith Canada said that it had also “the City of Ottawa about plans for a scheduled conference this afternoon that would feature a leader of the Popular Front for the Liberation of Palestine, a designated terrorist entity in Canada.”

According to Terry Glavin, author of the National Post expose on Barakat, the city’s legal department looked into the issue but saw no problems with Barakat speaking.

“We condemn this attack that Zionists are waging against this brave organization [ILPS], who have actually hosted in 2015 the icon Leila Khaled in Manilla, so they’re not afraid of hosting us in Ottawa,” Barakat said on June 3. She is a PFLP terrorist noted for her role in airplane hijackings.

A promotional image for the ILPS assembly showed a previous ILPS event in which Barakat and Kates sit next to a PFLP poster featuring the terrorist group’s imprisoned secretary-general Ahmad Sa’adat.

Another advertisement on Instagram says the ILPS supports Palestinian “resistance” against Israel “by any means necessary” — A phrase that has recently become more popular with anti-Israel groups and has been widely criticized as condoning violence and terrorism.
Khaled Barakat

“There is no secret as to the affiliation and activities of Khaled Barakat,” the Israeli embassy to Canada told the National Post on Wednesday. “Over the years, his close ties and even leadership roles in the PFLP were not hidden or disguised.”

Barakat is listed in the ILPS event program as a representative of the Palestinian Alternative Revolutionary Path Movement (also known as Masar Badil), which according to CIJA calls for “a reinstatement of violent clauses that were removed from the Palestinian National Charter.”

On Wednesday, B’nai Brith Canada shared videos which it says shows Barakat admitting to his leadership role in the PFLP.

Samidoun advocates for the release of convicted terrorists, such as Sa’adat, Georges Abdallah and Marwan Barghouti.

“Only recently, as the Samidoun network tries to pass as a legitimate charitable organization, did PFLP try to cover up the connection between the organizations,” the Israeli embassy told Glavin on Wednesday.

“We completely reject the criminalization and terror listing of the PFLP and other Palestinian resistance organizations,” Samidoun told the National Post in a statement, also denying Barakat was a member of the NGO.

On May 28, Samidoun praised the release of Japanese Red Army (JRA) co-founder Fusako Shigenobu. The JRA committed the 1972 Lod Airport Massacre which killed 26 and injured dozens, including Lonna Sabah, which CIJA says was a Canadian citizen.