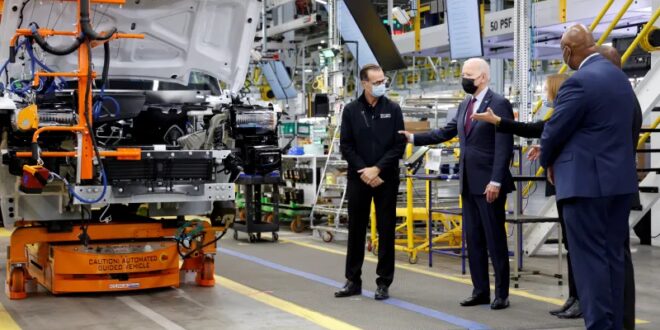 How Free Trade Can Fight Inflation

Over a year into U.S. President Joe Biden’s first term, the United States is still fighting former President Donald Trump’s economic wars. Biden’s rhetoric is less extreme and more polite, but his policies nevertheless channel his predecessor’s harsh isolationism: he has maintained sky-high tariffs on imports from China, preserved quotas on imports of steel and aluminum, and kept tariffs on imported washing machines.

In a climate of steep inflation, these policies impose real costs. Tariff-induced price increases are passed on to consumers and businesses through higher domestic costs for imported goods, resulting in more expensive clothes, footwear, dairy products, and other goods for everyday Americans. These additional costs aren’t an academic fiction; they take real money out of real consumers’ pockets.

Such pain calls for a change in policy. Economic protectionism may not have caused the recent bout of inflation in the United States, but removing or reducing tariffs could help end it. A two percentage point reduction in import barriers across a broad array of goods could reduce inflation by around 1.3 percentage points, saving the average U.S. household nearly $800 over the next year. Biden has said his “top priority is getting prices under control.” If he is serious about doing so, he should start by removing tariff and nontariff trade barriers.

EW ADMINISTRATION, SAME PROTECTIONISM
Biden has done more than maintain Trump’s protectionist trade policies. In addition to continuing his predecessor’s trade war tariffs, Biden has doubled down on so-called Buy America restrictions—rules that wall off federal purchases from foreign competition—cloaking his actions in the mantle of patriotism. Such policies signal that foreign firms, even those based in NATO countries, are unwelcome suppliers not just for the U.S. government but for ordinary American consumers. Biden has also failed to waive the Jones Act—a payoff to the U.S. Merchant Marine that prevents foreign vessels from carrying merchandise between U.S. ports—thereby imposing high shipping costs on Hawaiian and Puerto Rican families and worsening shipping congestion.

Biden’s protectionist bent also informs his administration’s China policy. At a press conference in May, U.S. Treasury Secretary Janet Yellen suggested that some Trump-era tariffs on Chinese imports “impose more harm on consumers and businesses” and do little to further U.S. interests. Yet U.S. Trade Representative Katherine Tai has consistently emphasized the need for a “durable, effective strategy” to compete with China, one that includes tariffs. Compounding the issue is the insistence by some politicians, such as Republican Senators Marco Rubio and Josh Hawley, that any trade with China is unpatriotic, with no distinction drawn between pillowcases and high-tech lasers.

Economic protectionism may not have caused inflation, but removing tariffs could help end it.
Unfortunately, Biden’s opposition to free trade coincides with the highest inflation rate in decades, exacerbated by the COVID-19 pandemic, supply chain woes, and soaring energy costs. Global fertilizer prices, for example, have more than doubled from a year ago. World steel prices reached historic highs last year and could rise even further since Russia destroyed Ukraine’s giant Azovstal plant and sanctions placed Moscow’s exports squarely behind a Western embargo.

Trump’s—and now Biden’s—steel tariffs and quotas will only add to inflation by raising the price of automobiles, refrigerators, plumbing fixtures, bridges, and much more. Although domestic steel makers may insist that such tariffs protect U.S. jobs, American steel users pay an extra $650,000 per year for every steel job saved—an unacceptable cost. Meanwhile, penalty duties on Canadian lumber add an extra $18,600 to the price of the average newly constructed U.S. home. Between 2017 and 2021, lumber imports from Canada plummeted from $5.9 billion to $185 million. The list goes on.

Even carve-outs designed to address foreign complaints about U.S. protectionism have made little difference. Some countries have successfully negotiated permanent exemptions from U.S. steel and aluminum tariffs in exchange for limits on other exports to the United States, but such quotas do little to increase the supply of raw materials available to U.S. steel-using industries. Brazil and South Korea, for example, agreed to quotas in 2018, but their steel exports to the United States remain well below pre-tariff levels.

TRADE AND INFLATION
Given the economic costs of protectionism, trade liberalization must be a central part of any anti-inflation policy. After all, cutting tariffs and removing import quotas will lower the costs of imported goods purchased by U.S. firms and households. At the same time, cheaper foreign goods will put downward pressure on domestic prices for competing merchandise. Since low-income households consume a larger proportion of their earnings than high-income households, any tariff reduction would also disproportionately benefit the most vulnerable U.S. families.

A good place to start is with the equivalent of a two-percentage point tariff reduction, which could reduce inflation by roughly 1.3 percentage points over the next year. To achieve this goal, Biden should eliminate nearly all of Trump’s tariffs on steel and aluminum and Chinese imports. Biden should also provide emergency relief from duties on key products such as fertilizer and lumber. Although a 1.3-percentage point reduction might seem small while inflation rages at 8.3 percent, the relief would not be trivial. In concrete terms, the average U.S. household would save an additional $800 over the next year. And in more normal years, when inflation is running near the Federal Reserve’s annual target of two percent, a 1.3- percentage point reduction would be significant.

But the Biden administration could be even more ambitious. If Washington took additional measures, including relaxing Buy America restrictions and lowering peak most-favored-nation (MFN) tariffs—those above 20 percent—to a maximum of ten percent, it could reduce the average tariff burden by 4.2 percentage points and decrease inflation by two percentage points, all while still leaving many barriers in place. In particular, our analysis assumes that the United States will retain its limits on imported services—for instance, requiring foreign professionals to undergo onerous licensing processes and preventing foreign ships from transporting merchandise between U.S. ports. Although such barriers sharply raise the price of many vital services, the current political climate would make it extremely difficult to eliminate them.

The value of tackling trade protectionism is obvious.
Moreover, if Biden wants to deliver quick relief for consumers, he could prioritize reducing tariffs on imported goods that figure prominently in household expenditures, including dairy products, clothing, and footwear. By capping MFN tariffs on these products at ten percent, Biden could visibly lower advertised prices for everyday merchandise sold by Amazon, Walmart, and other major retail outlets. Again, such a policy would primarily benefit low-income households since they spend a higher share of their income on basic goods.

Separately, Biden could ask Congress for authority to suspend tariffs or duties for 18 months on any product that the president determines is in short supply, starting with infant formula, fertilizer, and lumber. To assuage legislative-branch fears about an executive power grab, the law could automatically expire if annual inflation drops below three percent within 18 months and contain a provision allowing Congress to override the president. Taken together, these policies would burnish Biden’s anti-inflation credentials and be welcomed by U.S. consumers as prices drop at retail outlets.

LIBERALIZE GEOPOLITICS
Beyond combating inflation, trade liberalization can also serve U.S. geopolitical objectives. Protectionist sentiments, for instance, will inevitably undermine two of Biden’s major international initiatives: the Indo-Pacific Economic Framework (IPEF)—which aims to counter China’s economic statecraft, and the U.S.-EU Trade and Technology Council (TTC), which seeks to coordinate transatlantic policy on commercial issues. As long as domestic opposition to free trade takes new access to U.S. markets off the table in negotiations, these signature initiatives must increasingly rely on U.S. security commitments to encourage participation. This unspoken tradeoff may not work for countries that already have military alliances with the United States or for those that may not harbor acute fears of Chinese expansion, such as Indonesia and Malaysia.

With these practical constraints, the IPEF and TTC may well prove insufficient substitutes for existing trade and investment agreements, such as the Comprehensive and Progressive Agreement for Trans-Pacific Partnership—the agreement Trump ditched early in his presidency—and the Regional Comprehensive Economic Partnership, China’s lead entry in the regional trade sweepstakes. After all, Biden is asking foreign partners to accept U.S. norms on labor and minority rights, gender equality, environmental rules, public corruption, state-owned enterprises, artificial intelligence, digital practices, data privacy, and much more in exchange for little except broad and unspecified security assurances. This bargain may not sit well with domestic constituencies in partner countries more concerned about bread-and-butter issues than geopolitics.

Trade liberalization, by contrast, would open up a host of new possibilities. Biden could, for instance, offer concrete benefits to partners by lifting steel and aluminum tariffs and quotas, relaxing Buy America rules to expand market access in government procurement, or lowering dairy and clothing tariffs. Doing so would demonstrate political goodwill and enhance foreign support for U.S. initiatives.

THE INEVITABLE BACKLASH
Although eminently sensible in economic and geopolitical terms, trade liberalization will inevitably face challenges from business and labor groups. Beneficiaries of protectionism, after all, have strong allies in Congress and in the Biden administration. Biden himself described Buy America rules as a cornerstone of his foreign policy, and major U.S. corporations, particularly construction firms and defense contractors, stand to benefit from the rule’s provisions. Still, relaxing such provisions could save the U.S. government and taxpayers an estimated $100 billion per year.

Similar savings would come from reducing steel tariffs, quotas, and a large array of penalty duties and tariff peaks. Advocates for protectionism oppose free trade in the name of “economic resilience,” but their policies come at a high cost—one that is ultimately borne by average consumers. Either inflation is Biden’s number one domestic priority or it is not. But if it is, the value of tackling trade protectionism is obvious.