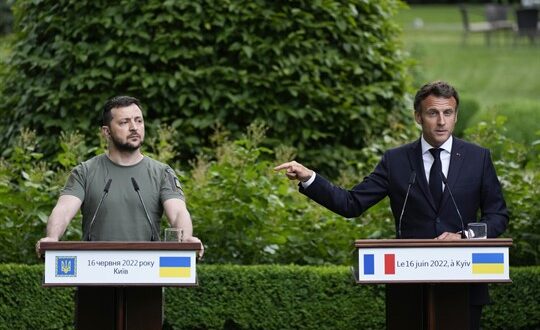 Macron’s Mixed Messages on Ukraine Come With a Cost

French President Emmanuel Macron came under heavy criticism recently for suggesting that Europe must find a way to broker a settlement to the war in Ukraine that avoids “humiliating” Russia. Macron subsequently clarified that he staunchly supports Ukraine’s war efforts, which France has been actively assisting, including by providing weapons shipments.

But Macron’s comments, which draw on bad historical analogies to the 1919 Treaty of Versailles and its treatment of Germany following World War I, still raised concerns. And the fact that it is not the first time he has had to clarify his remarks on the conflict revived questions regarding France’s commitment to maintaining a fully intact and sovereign Ukraine. Macron reiterated that commitment yesterday while visiting Kyiv with several European counterparts. Still, it’s hard not to wonder, Why is he making what at first glance appears to be a beginner’s error?