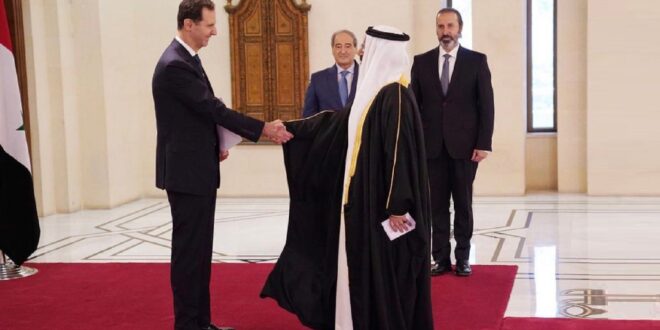 Syrian President Bashar Assad accepted the credentials of Bahrain’s new ambassador to Damascus. Assad “exchanged discussions with him on a number of topics and issues of concern to the two brotherly countries, wishing him success in his mission,” according to the state news agency SANA. Waheed Mubarak Sayyar was appointed as Bahrain’s ambassador to Syria more than six months ago, but reportedly just took up his post more than a week ago when he was received in Damascus by Syrian Foreign Minister Faisal Mekdad, who also attended Sunday’s ceremony.

Bahrain cut ties with Syria in 2011 at the start of the country’s long-running civil war. Bahrain announced that it would reopen its embassy in 2018 but Sunday’s credentials ceremony marks its first full diplomatic mission in Damascus in more than a decade. This announcement came months after the United Arab Emirates also would reopen its embassy, the beginning of the normalization of ties with Syria among the members of the Arab League. Bahrain was one of three Arab countries to normalize relations with Israel when they signed the Abraham Accords in September 2020 in Washington, DC.