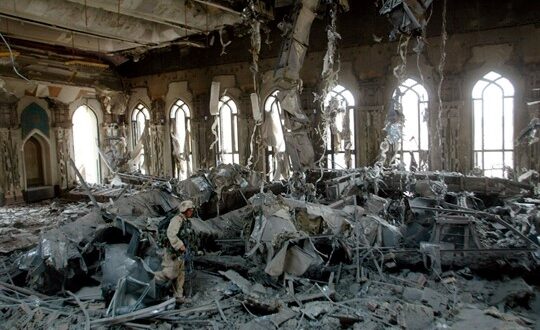 Reckoning With the Iraq War Would Strengthen the U.S. Hand on Russia

Ever since Russian President Vladimir Putin ordered the invasion of Ukraine last week, comparisons to the United States’ 2003 invasion of Iraq have inevitably and understandably emerged. After all, at transformative moments in world history like the one we’re currently witnessing, analysts naturally draw historical analogies to make sense of contemporary events, mining the past in search of patterns and causal connections that bear some resemblance to what is unfolding today.

And while no two situations are ever exactly alike, the comparison to Iraq in 2003 is particularly important, since it has considerable bearing on whether and how the United States can make a moral and political case against Russia’s current war of aggression.

Even more importantly, a clear and honest reckoning with the U.S. invasion of Iraq and its broader consequences for the international rules-based order could help inform the rejuvenation of international alliances and the rule of law that appears to have emerged in response to today’s conflagration, which poses arguably the greatest danger to global stability the world has faced since the end of the Cold War.

Defenders of Putin’s revanchist policies could conceivably argue that Russia isn’t trampling international law and the United Nations Charter, but merely building on precedents set by Washington with its military interventions in Kosovo, Libya and especially Iraq, where U.S. forces invaded in 2003 without a U.N. mandate. Even allowing for the fact that this particular argument is almost always made in bad faith, it nonetheless presents a problem, because it contains a kernel of truth.

The more measured version of the argument comes from so-called “restrainers” like Andrew Bacevich, who don’t appear sympathetic to Putin’s brand of militaristic overreach but nonetheless blame the U.S. for Russia’s actions in Ukraine. “The United States cannot absolve itself of responsibility for this catastrophe,” Bacevich writes in The Boston Globe, arguing that Washington’s hypocrisy and overreach in the war on terror and more recently with its “meddling” in Ukrainian politics “has effectively incited Russia to undertake its reckless invasion.”

The answers to these questions require some difficult introspection on the part of the West. First, an honest exploration of the parallels means admitting error—that the U.S. war in Iraq, which killed hundreds of thousands of Iraqis, was unjustified, incompetently executed and strategically catastrophic. Second, analysts and historians ought to acknowledge the causal connections between that invasion and today’s events, as U.S. overreach and hawkishness helped create a permissive climate for other major powers seeking to expand or consolidate their spheres of influence.

Even before tackling those questions, though, a sober view of war-making and major power overreach means taking stock of the long history of lawlessness in international affairs. There has never been a golden age when major powers scrupulously obeyed international law, nor was there some turning point after which the law of the jungle prevailed. In fact, during the Cold War and after, the major powers often availed themselves of both.

Similarly, the United States decided to invade Iraq and manufactured a pretext to do so. While Washington found other democracies willing to join it in a “coalition of the willing,” it was unable to secure a U.N. resolution or a credible legal justification for the invasion. At great cost to Iraq and its citizens, the U.S. went ahead with the invasion anyway, intent on transforming the regional order, a grandiose project that carries parallels to Putin’s desire to create a new multipolar world in which Russia stands as an equal to the United States.

Of course, by the time Washington withdrew combat troops from Iraq at the end of 2011, the invasion had made shambles of the Arab state system and left Iraq fragmented and poorly governed. Reckless U.S. policy had also tipped the scale in favor of the law of jungle at the expense of the rule of law, with Russia and China mirroring the United States’ unilateral aggression with smaller-scale versions of their own in Georgia and the South China Sea, respectively.

Admitting these shortcomings in good faith makes it easier to distinguish between U.S. overreach in 2003 and Russian overreach in 2022. For starters, as WPR editor-in-chief Judah Grunstein noted, the “perverse effects” of American unipolarity didn’t by themselves cause Putin’s actions, even if they “helped create an ecosystem in which he can thrive.” And despite the criminality and recklessness of the U.S. invasion and occupation of Iraq, the United States did not seek to annex or control the country. To borrow a famous phrase of former President Donald Trump’s, the U.S. didn’t “keep the oil.” It even nurtured the development of an Iraqi political system that ultimately paved the way for subsequent governments in Baghdad that distanced themselves from or even outright opposed U.S. interests, a misalignment that Iran was able to exploit to play a dominant role in Iraq’s domestic affairs. Arguably the United States could not have prevented those outcomes, but it didn’t even try to.

Washington’s responsibility for the erosion of the rules-based order isn’t limited to the invasion of Iraq. Harmful foreign policies by successive U.S. administrations have serially undermined international institutions and international law since the attacks of 9/11. Former President George W. Bush laid the foundations for the greatest harm through his toxic innovations of the “war on terror”: preemptive war, extrajudicial execution, indefinite extrajudicial detention and torture. But Barack Obama’s drone strikes and Donald Trump’s transactional embrace of dictators also did damage.

It certainly counts for something that the United States continued to support international institutions and norms in other spheres, even as it worked to weaken them elsewhere. But an effort to stave off bad-faith criticism that falsely paints a moral equivalency between Putin’s Russia and the United States must begin with a recognition of how deeply the United States has harmed the international norms it professes to defend over the years since 9/11.

The renewed commitment to law over brute force on display today in response to Russia’s invasion could turn out to be a turning point—but only if the West can be honest about its own poor record with respect to the constant tension between the two in the recent past.

The U.S. State Department appears to have a completely different map of the Middle East than the Pentagon, with the former’s reflecting a fixed legacy of early 20th century imperialism and the latter’s a more practical understanding of contemporary power relations. In an essay in Foreign Affairs, Marc Lynch unpacks the historical and colonial roots of the “Middle East,” which like all of the world’s regions is a human-made artifact. Lynch argues that contemporary American understandings of the region are rigid and outdated, and contribute to Washington’s disastrous policies there. His history is instructive and his prescriptions useful for the Middle East—but his analysis holds for U.S. conceptions of other regions all over the world. The broader takeaway from his compelling essay is that it’s okay to sometimes resort to simplifying concepts like the West, the Middle East, the G-7 or the developed world, so long as we remember they are incomplete heuristics and in need of constant revision to adapt to an evolving world.

U.S. partners in the Middle East are trying not to line up against Russia. This roundup from the Quincy Institute on Feb. 25 reports that Israel refused to provide air defense systems to Ukraine, and Saudi Arabia refused to raise oil production amid rising prices. Meanwhile, Qatar and the United Arab Emirates carefully avoided taking clear sides in the conflict. That said, it’s still early days, and policy shifts require time; some Middle East countries might end up taking more decisive positions as the Ukraine conflict progresses. But recent history suggests they will want to keep channels open with all the major powers that exercise influence in the region, including the United States, Russia and China. All the regional states are weighing multiple competing interests, including energy prices, defense and arms contracts, security partnerships and intelligence-sharing agreements. Moreover, many of Washington’s Middle East partners have poor records on democracy, rights and waging wars of aggression themselves, so they are unlikely to be swayed to sacrifice their own transactional interests in order to stand on the “right side of history.”

Post Views: 77
Previous The U.S. Failure in Afghanistan Is Not Pakistan’s Fault
Next Great Power Competition Is Coming for the Arctic. NATO Should Prepare