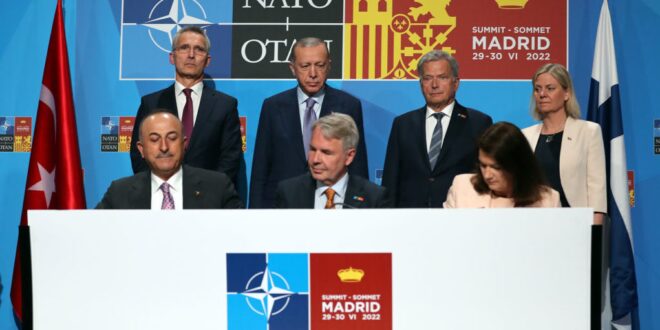 Turkey lifted its opposition to allowing Sweden and Finland to join the NATO Western alliance. Turkey’s agreement came on Tuesday, less than a day before the opening of the NATO summit in Madrid, following talks between leaders of the three countries. NATO Secretary-General Jens Stoltenberg called it a “historic decision.” The two countries agreed to lift restrictions on selling weapons to Turkey, and Sweden agreed to respond to Turkish extradition requests of suspected militants.

Turkey “got what it wanted” from Sweden and Finland, according to a statement from President Recep Tayyip Erdogan’s office. Finland and Sweden promoted their bids to join NATO after the Russian invasion of Ukraine, fearing that they could be next. Finland shares an 800-mile border with Russia. Turkey has accused both Nordic nations of supporting “terrorist organizations,” referring to the Kurdistan Workers’ Party and Syria’s Kurdish People’s Defense Units. It could take up to a year for NATO’s 30 member countries to ratify Sweden and Finland’s memberships in the alliance.