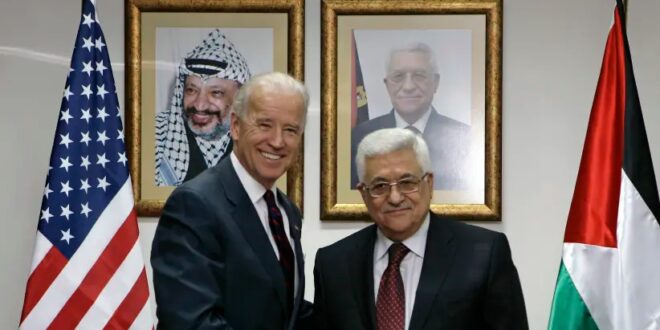 The Palestinian leadership will present five demands to US President Joe Biden during his upcoming visit to the region, senior Palestinian Foreign Ministry official Ahmed al-Deek told The Jerusalem Post on Sunday.

Deek expressed hope that the Biden administration would accept all the Palestinian demands. He called on Prime Minister Yair Lapid to immediately meet with Palestinian Authority President Mahmoud Abbas to revive the stalled Israeli-Palestinian peace negotiations.

Deek listed the demands as follows:

1) Restoration of a “political horizon” between Israel and the Palestinians.

Deek said that this was the most significant demand because it would entail “obliging the Israeli government to engage in serious negotiations and a peace process to end the occupation.” The Palestinians, he said, are ready to immediately resume the peace negotiations with Israel. “The Palestinians are the only ones who want to return to the negotiations,” Deek argued.

“Biden promised to reopen the consulate and we are waiting for him to fulfill his promise,” Deek told the Post. The consulate, which served as a de facto American diplomatic mission to the Palestinians, was closed by the Trump administration in 2018. The Palestinians consider the reopening of the consulate as a US recognition of east Jerusalem as the capital of the future Palestinian state. They are also hoping that the reopening of the consulate would effectively cancel Trump’s 2017 recognition of Jerusalem as the capital of Israel.
3) Removing the PLO from the list of terrorism and reopening the organization’s diplomatic mission in Washington.

In 2018, the Trump administration closed the PLO office to pressure the Palestinians to stop working with the International Criminal Court (ICC) against Israel. In 1987, the US Congress declared the PLO a terrorist organization and prohibited it from opening any of its office in the US. Despite the decision, the Congress allowed US presidents to issue an exemption with their consent, which every president except for Trump has done since the signing of the Oslo Accords in 1993 between Israel and the PLO.
4) exerting US pressure on the Israeli government to halt the “escalation” against the Palestinians.

“This means translating the US positions, such as rejection of settlements and seeking calm and confidence-building measures, into practical measures whereby the Israeli government would be forced to halt the escalation,” said Deek. “It’s time for the US to move from rhetoric and nice and positive statements towards putting pressure on Israel to end its policies and measures.

“The Israelis are carrying out gradual annexation of parts of the West Bank, especially in the areas of the Jordan Valley and Hebron,” he said. “On the ground, they are doing whatever they want. Israel wants to annex Area C, which they see as constituting strategic depth for the settlements.

“The talk about a peace process has become a fantasy and unrealistic. This situation poses a serious threat to the concept of a two-state solution, which the Biden administration says it remains committed to achieving. Soon, our people will start laughing at us when we talk about the two-state solution.”

5) Restoring US financial aid to the PA.

Deek said that thus far the US has only resumed aid to the United Nations Work and Relief Agency for Palestine Refugees (UNRWA). “We need the money. We hope the aid will be resumed. In 2018, Trump cut Palestinian aid to zero. During the same year, Congress suspended economic assistance to the Palestinians [through the Economic Support Fund-ESF] unless and until the PA ceased payments to convicted terrorists serving in Israeli prisons and ceased paying families of ‘deceased terrorists who died committing acts of terrorism.’”

THE SENIOR PA official said the US administration could help create an appropriate climate for reviving the Israeli-Palestinian peace process. “We continue to believe in political solutions to the conflict,” Deek stressed.

Asked about the PA leadership’s stance toward Lapid, he said that “We will judge Yair Lapid by his deeds and not by his words. We are searching for a real Israeli peace partner so that we could sit with him at the negotiating table. The hand of President Abbas is always extended for peace. Bennett rejected this extended hand, but we hope that Lapid will shake hands with President Abbas.

Post Views: 49
Previous Thinking About the Unthinkable in Ukraine
Next 46% hike in number of West Bank Palestinians killed by Israeli forces – UN